This is an Old World lizard in the New World at a time when we weren't expecting to find it. 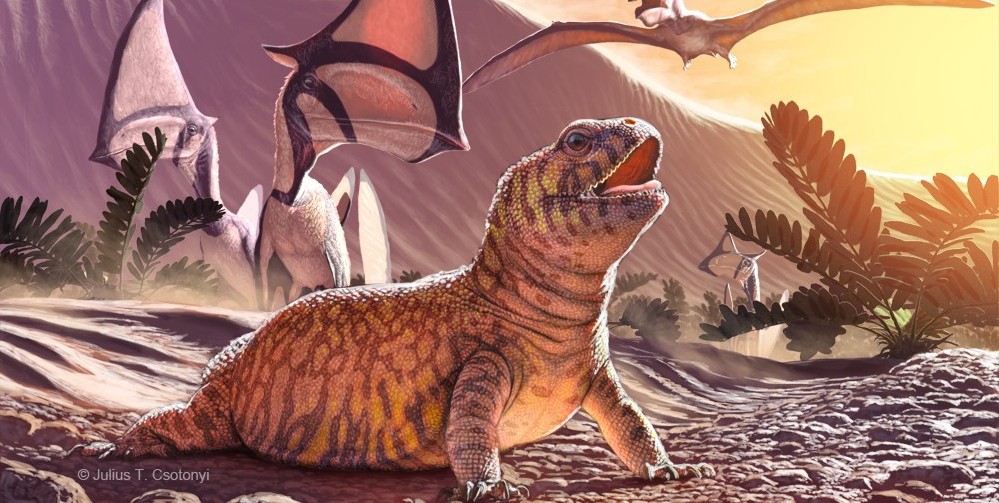 University of Alberta paleontologists have discovered a new species of lizard, named Gueragama sulamericana, in the rock outcrops of a Late Cretaceous desert in what is now the municipality of Cruzeiro do Oeste in Southern Brazil, dating back to about 80 million years ago.

“The roughly 1700 species of iguanas are almost without exception restricted to the New World, primarily the southern United States down to the tip of South America,” says Michael Caldwell, biological sciences professor at the University of Alberta and one of the study’s authors. And yet, he notes, the iguana's closest relatives—including chameleons and bearded dragons all hail from the Old World.

Iguanas are one of the most diverse groups of extant lizards, spanning from acrodontan iguanians (those with teeth fused to the top of their jaws) dominating the Old World to non-acrodontans in the New World. The newly discovered lizard species is the first acrodontan found in South America, suggesting both groups of ancient iguanas roamed throughout the single landmass of Pangaea before its final breakup.

“This fossil is an 80-million-year-old specimen of an acrodontan in the New World,” explains Caldwell. “It’s a missing link in the sense of the paleobiogeography and possibly the origins of the group, so it’s pretty good evidence to suggest that back in the lower part of the Cretaceous, the southern part of Pangaea was still a kind of single continental chunk.”

Distributions of plants and animals from the Late Cretaceous reflect the ancestry of Pangaea when it was whole. “This Gueragama sulamericana fossil indicates that the group is old, that it’s probably Southern Pangaean in its origin, and that after the breakup, the acrodontans and chameleon group dominated in the Old World, and the iguanid side arose out of this acrodontan lineage that was left alone in South America,” says Caldwell.

“South America remained isolated until about five million years ago. That’s when it bumps into North America, and we see this exchange of organisms north and south. It was kind of like a floating Noah’s Ark for a very long time, about 100 million years. This is an Old World lizard in the New World at a time when we weren’t expecting to find it. It answers a few questions about iguanid lizards and their origin.”

The study saw the U of A's world-leading paleontology researchers teaming up with scientists in Brazil. Caldwell says of the collaboration, “It’s providing an opportunity for our students and research groups to expand our expertise and interests into an ever-increasing diversity of organisms within this group of animals called snakes and lizards.”

Tiago Simoes, lead author of the paper, is Caldwell’s PhD student and a Vanier scholar. “As with many other scientific findings, this one raises a number of questions we haven’t previously considered,” says Simoes. “This finding raises a number of biogeographic and faunal turnover questions of great interest to both paleontologists and herpetologists that we hope to answer in the future.”

In terms of next steps, Caldwell notes, “Each answer only rattles the questions harder. The evolution of the group is much older than had been previously thought, which means we can push an acrodontan to 80 million years ago in South America. We now need to focus on much older units of rock if we’re going to find the next step in the process.”

The study, “A stem acrodontan lizard in the Cretaceous of Brazil revises early lizard evolution in Gondwana,” was published in Nature Communications, one of the world’s top multidisciplinary scientific journals.