Four agreements signed to strengthen ties between UAlberta and China 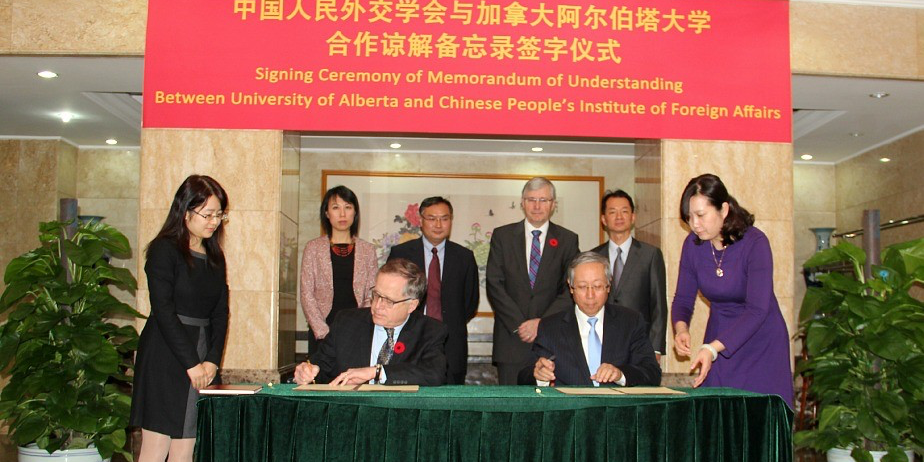 Gordon Houlden, director of UAlberta's China Institute, and Shumin Lu, former Chinese ambassador to Canada and former vice-minister of foreign affairs, sign the MOU between the university and the Chinese People’s Institute of Foreign Affairs.

(Edmonton) As Prime Minister Stephen Harper prepares for the APEC Summit and other meetings starting this week in China to improve relations between Canada and China, the University of Alberta signed a major agreement Wednesday between its China Institute and the Chinese People’s Institute of Foreign Affairs.

“We are the one and only research centre in Canada focusing exclusively on the study of China and China-Canada relations,” says the China Institute’s associate director, Jia Wang, adding that the institute is also the only centre the federal government approached to lend expertise on dialogue between the two countries.

“We were approached by the Department of Foreign Affairs, Trade and Development because there are issues that affect Canada-China relations that need real negotiations and experts to find solutions,” says Wang. “This platform will facilitate real and meaningful dialogue between the two countries.”

The memorandum of understanding is meant to help senior scholars and policy experts exchange ideas and collaborate on a wide of range of issues, especially trade and investment, she said. It was signed at Chinese People's Institute of Foreign Affairs in Beijing and witnessed by the Canadian ambassador to China, Guy Saint-Jacques. Gordon Houlden, director of the China Institute, and Shumin Lu, former Chinese ambassador to Canada and former vice-minister of foreign affairs, were the signatories.

“It is very flattering that they would come to us to be the Canadian facilitator of this kind of dialogue,” says Wang. “China is probably the most important international partner for the U of A right now.”

There are some 4,000 students from China at the U of A, she says—the largest number at any university in the country by far—and there are more than 90 agreements with Chinese institutions, research centres, government agencies and ministries.

The U of A also signed three other agreements in China this week, two of which were witnessed by Prime Minister Harper.