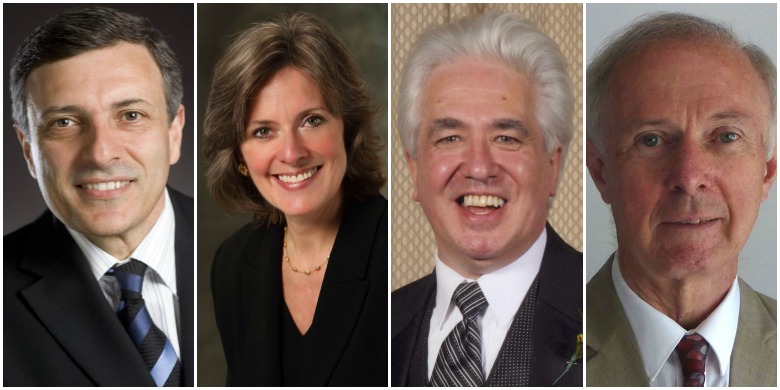 (Edmonton) In recognition of their outstanding scholarly and scientific achievements, four University of Alberta faculty members have been elected as fellows of the Royal Society of Canada.

“On behalf of the university, I congratulate our four new RSC fellows. Election to the Royal Society of Canada is an important and proud milestone in a researcher’s career because it officially and publicly recognizes a scholar’s expertise and contributions within their field,” said Lorne Babiuk, U of A vice-president of research and also an RSC fellow. “We are very proud of their scholarly accomplishments as well as their impact on our students.”

Egerton came to the U of A in 1975 as a visiting professor from Oxford. Soon after he arrived a permanent position opened up that he couldn’t pass up.

“I decided to stay, largely because being a faculty member seemed to involve a feeling of freedom, responsibility and privilege,” he said.

In his time at the U of A, Egerton’s pioneering work in electron energy loss spectroscopy opened the field of quantitative electron microscopy and chemical analysis to probe the structure and chemistry of materials.

Egerton retired to Canmore in 2004, but continues his research thanks to a renewed NSERC Discovery Grant, visiting the National Institute for Nanotechnology every few months, living for a week or two in the Lister Hall Conference Centre.

“The University of Alberta has been a relatively tranquil place with good technical and laboratory facilities where I have carried out most of my research over the last 35 years,” said Egerton. “Funding from NSERC has been stable, a great advantage in terms of the freedom to pursue things that I thought important at the time.”

Pinfold, who joined the U of A in 1992 and, like Egerton, is a United Kingdom-trained physicist, was a leader in the discovery of the first hard evidence for electroweak unification and a founder of the ATLAS-Large Hadron Collider Experiment that has potentially discovered the Higgs boson. In the search for new physics, he has been a spokesman for the international collider experiment MODAL and co-spokesman for the SLIM astroparticle experiment, and now leads the newest LHC experiment, MoEDAL.

“The U of A is really interested in becoming a number one research institution, and I think they’ve been willing to go the mile to do that,” said Pinfold. “The university has the right idea about research and it’s important.”

In the 23 years since he joined the U of A, AbouRizk has significantly advanced the field of construction engineering, particularly in construction simulation modelling and analysis. He is internationally acknowledged as a leader in project planning, productivity improvement, constructability, risk analysis and uncertainty modelling.

"In reality, it's a team effort," he said. "I am a team player and I would not be getting this incredible recognition without the team. I have been blessed with great department chairs and I have to credit [dean of engineering] David Lynch in what he has done—he has made it a mission to grow this program."

He says the university's support of research has been key in his program's success, from the department and faculty level to the most senior offices on campus.

"Do you know what it is like for an industry partner to be able to speak to a university president or vice-president? I have always had great support."

Cairns’ extraordinary contributions to choral music since she joined the U of A in 1989 span the full spectrum of research and creative activity. An award-winning conductor and internationally published scholar, she has received recognition in both the performance and academic domains through CD publications, national broadcast recordings and competition prizes with her chamber choir i Coristi, as well as articles, a scholarly edition of a Renaissance mass, and a book.

“I am indeed deeply honoured and humbled to be named a fellow of the Royal Society of Canada,” said Cairns. “I have been the beneficiary of working with wonderful colleagues in the Department of Music and across the Faculty of Arts, who have inspired me through their creativity and thought-provoking research.

“I am indebted to both the department and faculty for their support of my research and performance pursuits over the years, which enabled me to realize many of the accomplishments that formed the body of my work reviewed by the RSC jury.”

The Royal Society of Canada was founded in 1882 and is Canada's oldest and most prestigious scholarly institute. With this year’s inductees, the U of A now has 115 members.

With notes from Richard Cairney