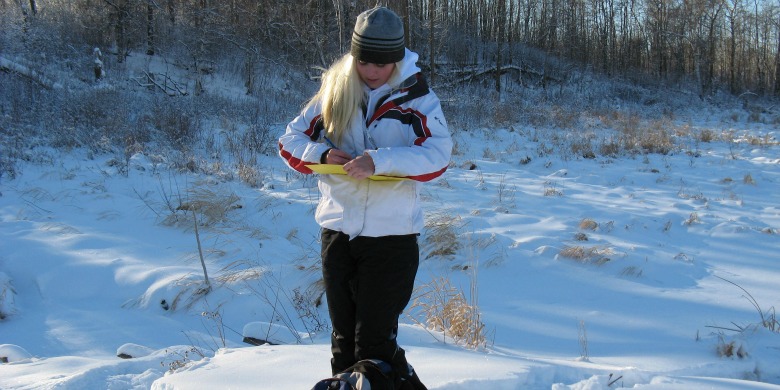 130219-chantalbromley-banner
As an undergraduate researcher, Chantal Bromley hiked the wilds of Miquelon Lake Provincial Park for a study on how beavers open winter water for Canada geese.

(Edmonton) Chantal Bromley spent a lot of shivering cold weekends at Miquelon Lake, snowshoeing her way through the stark white wilderness, notebook in hand, searching out data in the winter of 2008.

“I remember one time my professor, Glynnis Hood, made me run a bit because I was freezing up.”

Not exactly ideal weekend plans for a third-year University of Alberta Augustana Campus student, but Bromley was exhilarated at trekking well beyond the classroom and into the field to do hands-on work. From January to April of that year, Bromley, who was studying biological science, repeatedly hiked the ponds of Miquelon Lake Provincial Park, making the rounds to record the numbers of geese as well as tracks of moose, mice, fox and other mammals who were coming to the water’s edge.

Her hard-earned, teeth-chattering research—on beavers and their effects on opening winter water for Canada geese—conducted through Augustana’s Directed Studies Courses, has resulted in a peer-reviewed published study in a recent issue of Mammalian Biology for which she shares credit with Hood—no small accomplishment for the freshly minted undergrad.

“It’s great that Glynnis saw enough potential in the work we did to submit it for publication and at an undergraduate level, it was great being able to contribute to the knowledge base,” said a proud Bromley.

Now enrolled in a Calgary architectural program to earn a master’s degree, Bromley is taking what she learned as a U of A science grad and applying it to both private and public human spaces.

“In nature, one habitat flows into the next habitat. My approach to architecture is based on what I know about biology.  I try to relate to space as an ecology—an interaction of species within an environment.”

During her undergrad project, which she voluntarily took on with her regular course load, Bromley was required, like any researcher, to write a proposal, give progress reports, review existing scientific literature and present her findings at an academic conference on Augustana Campus. She also won a community competition with her environmental work.

Putting her work out there as a budding scientist fuelled her skills for successful graduate studies, Bromley said. “When you get to the master’s level it is important to have the skills I learned at Augustana.”

Hood, an associate professor in the Department of Science, said Bromley’s work adds to what is known about Miquelon Park. “Chantal’s project was the first time the park had been researched like that. There wasn’t a lot known about the park ecologically. Now it is a research hub for the campus.”

Bromley’s work also points to the beaver as a valuable species that helps make water available for other mammals and birds, and hers was the first park-wide survey of Miquelon’s beaver population. The study findings also go to Alberta Tourism, Parks and Recreation for use in setting research goals, Hood noted.

The work of undergraduate researchers like Bromley “is a research engine” at Augustana Campus and enriches the scope of the student experience, she added. “The work extends much more broadly than just a course in a faculty. It’s very much active learning.”