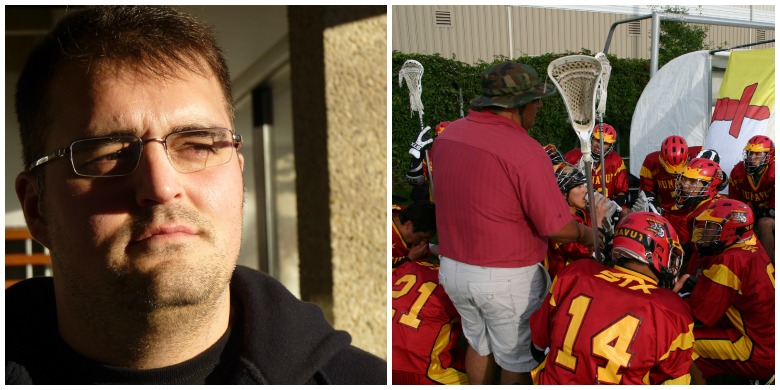 (Edmonton) The Arctic tundra is an often romanticized region of the world, as typified through the voice of author Pierre Berton, where intense 100-kilometre-per-hour winds, -60 C temperatures, bright dense summer flora and immense nine-kilogram Arctic char create imagery associated with the spirit of the Canadian explorer, a place where beauty meets endurance and humankind meets itself.

Those elements do exist in the small hamlet of Kugluktuk, Nunavut, but there also exists a set of stark and contrasting realities for those who live in geographic and social isolation for most of the year. It’s a place where, for many, 10 or more family members might live in a small bungalow built on stilts, where 20 hours of darkness per day and few economic opportunities segue into indifference, immobilization and dark choices.

When Russ Sheppard arrived in Kugluktuk in 1998, with an education degree from the University of Saskatchewan and a desire to make a connection with students, he was unprepared for the profound misery and hopelessness that faced the youth and the community. Chronic cycles of family drug and alcohol abuse, domestic violence and low class attendance at the local high school were prevalent. Over several years, the suicide rate in Kugluktuk was the highest in Canada—and in February of 2000, a rash of six suicides in a school of 135 students pushed the entire community to the brink of numbed oblivion.

Nurturing a meaningful connection and establishing a solid rapport with the students was critical. “I was a ‘southern’ teacher with western ideologies about teaching. I had to learn how to become a ‘northern’ teacher with a different mindset,” said Sheppard. “They needed to trust that hope existed and that something could transform their circumstances.” That connection developed over time and wasn’t easy, but “they were ready, they were waiting for something.”

The solution came from an unlikely source—the sport of lacrosse.

Playing for their lives

“We needed to find a way to combat the negative forces that plagued the community,” said Sheppard. And with that goal in mind, the Grizzlies Lacrosse Team was born.

Although the sport was the catalyst that propelled the transformation, it was also part of a holistic approach to a program that included both significant and incremental changes. Students who wanted to participate on the team were required to fulfil three criteria in the Stay-in-School Grizzlies Lacrosse Program: 80% attendance or better, weekly performance logs including effort assessment, and participation in developing a social enterprise program as a means of training and fundraising.

The results changed the landscape of the school and the community. In the inaugural year of the Grizzlies program, attendance exploded from 20% to nearly 100%. Slowly, student morale was shifting and the new community-wide prominence of the lacrosse stick had become a prevalent symbol of hope.

The social enterprise component of the program flourished when the students participated in managing the concession stand at the local rink as part of the newly formed Grizzly’s Den Arcade—an enterprise Sheppard founded. He managed operations and administered $500,000 in gross annual profits, with a net annual profit of $52,000 going into youth recreation programming.

The students also created a team logo, ordered jerseys and equipment, and used some of the funds they raised to travel outside of town to compete in tournaments locally, provincially and nationally.

It was not only what they were accomplishing that helped propel the radical shift, but also what they had to overcome and endure to achieve it. An increase in positive school connections resulted in stronger familial and community ties, reduced student vulnerability to negative forces such as drug and alcohol dependency, and reduced risk of perpetuating the cycle of dependency and domestic violence.

The students learned that everyone had a meaningful purpose and a role to play that contributed to the overall well-being of the individual and the group. In 2006, the team travelled to Winnipeg to participate in the national lacrosse championships.

Other unexpected successes arose out of this transformational experience. Sheppard received numerous awards for his outstanding accomplishments, including the Queen’s Diamond Jubilee Medal in 2012, the Sport Nunavut Coach of the Year award in 2004 and the Business Development Bank of Canada’s Youth Entrepreneur Award in 2003.

He was invited to speak at several conferences. He was the keynote speaker for the U.S. Lacrosse Federation in 2004, and presented for the Six Nations Police Force in Ottawa in 2004 that focused on positive ways to transform a group. And in 2005, his story was told in an ESPN SportsCenter feature.

After his life-changing seven years in Kugluktuk, Sheppard was preparing for a career transition. He spent a few years in the Edmonton Public Schools system and some time in southern Ontario, but was searching for a new challenge.

After much contemplation about next steps and with a profound desire to renew his sense of place in the world, he decided that a career in law would afford him the flexibility he was searching for on many levels. It could help him achieve a different perspective and a different way of thinking, dismantle barriers, and allow him some flexibility to control the “what and the where” of his career direction.

During his time at the University of Alberta’s law school, Sheppard’s principal interest was in Aboriginal law, and in his last year at the school he had been working with professor Catherine Bell on an Aboriginal negotiation competition.

In May, he, along with his wife Maxine, who is an agrologist, and their two children, headed to Cranbrook, B.C., where he is articling with Rockies Law.

He also signed a life rights agreement with Northwood Productions, which grants permission to tell the story of his transformational relationship in Kugluktuk. Filming is currently in pre-production.

He says the experience has left him inspired and humbled.

“I found myself to be much more self-aware about who I am and who we are. It’s real, it’s emotional. You really have to push yourself to the brink, because you never know what you are capable of.”

From death to new life at -60 C
Newsroom