From fixing fighters to healing patients

Nursing grad's road to PhD ran through two tours of duty in Afghanistan. 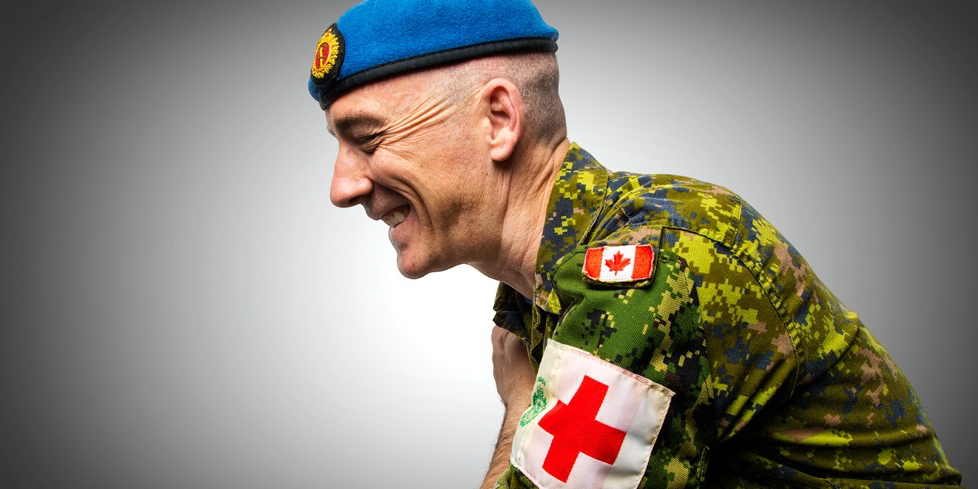 Roger Scott was an airplane mechanic, an ambulance driver and a paramedic before earning his PhD in nursing. Now he is responsible for strategic policy and direction for the Canadian Forces Health Services Reserve. (Photo: Richard Siemens)

To know Roger Scott 30 years ago, it may have been hard to imagine him today as a PhD, although perhaps the traits for success as an academic—restless, smart, curious—have always been there, even if the path wasn’t always clear.

After years as an air cadet, Scott left high school in Ontario for the Canadian Armed Forces, where he trained to be an airplane mechanic.

“I joined the military to see the world and got to see Cold Lake,” said Scott with a laugh. At 4 Wing Cold Lake, Canada’s busiest fighter base, Scott helped keep the base’s planes safe and in the air for a little more than seven years beginning in the early ‘80s.

He ingratiated himself with the community, first as a mechanic, then after training as a first-aid course instructor and finally as one of the local community’s ambulance drivers.

It was while working casually for the ambulance service that Scott found his new calling.

“It’s good work because you are the problem solver. People call 911 and you go out, take care of them and sort out the issue as best you can.”

Scott would secure his EMT by distance learning before leaving the military for NAIT in 1992 to take a two-year paramedic diploma program.

Scott’s first stop as a freshly minted paramedic was in Leduc working for Crown Emergency Medical Services, where he worked with people who were cross-trained as registered nurses.

“One paramedic in particular, Shari Lutz, was really good at what she did,” said Scott. “I looked up to her because she was so smart and understanding, and had a way of dealing with patients that I just didn’t see with other paramedics.

“I thought, that must be the nursing piece, so I want to do that as well.”

In 1997, he began an associate degree in nursing with Regents College in the United States before doing a bachelor of nursing degree through Athabasca University.

Scott never severed ties with the military, opting to join the Reserve Force where he worked with the cadet programs before transferring to health services. It was there that the former jet plane mechanic finally got his chance to see the world. It came in the form of two tours to Afghanistan, the first in 2003 as an officer in charge of inpatient services.

As he interacted daily with three family physicians, Scott began to think about the next phase of his career.

“I could either drop out of the workforce for four years to go to medical school and then do a two-year family medicine residency, or I could give this nurse practitioner thing a try and do a two-year master’s degree.”

Nursing won out. Scott was admitted into the U of A’s nurse practitioner program where he learned the ropes as a researcher before making the most of a string of opportunities that included stops with the military, a family health clinic, the Edmonton Remand Centre and then a position with Emergency Medical Services to develop a community care urgent response team to look after urgent needs of long-term care and continuing care residents in place. “I loved it.”

Finding and losing a mentor

More importantly, however, it was during his first degree at the U of A that he met Christine Newburn-Cook, an epidemiologist in nursing and the person who convinced Scott to return to the U of A, where she promised to supervise his PhD.

But in 2011, tragedy struck. Without warning, the Faculty of Nursing was shaken with word that Newburn-Cook was in a coma. She would die two weeks before the start of the school year.

“I remember she said she would be there the whole time,” Scott remembered of his friend. “It hit me hard.”

With his heart no longer in it, Scott put aside his PhD project looking at the role nurse practitioners play in urgent but non-life-threatening calls, and looked to start fresh.

His search landed him in the company of Faculty of Nursing researchers Colleen Norris and Gerri Lasiuk.

“I kind of just cold-called Colleen and said, ‘You don’t know me, but I’m an orphan, so to speak, and I was wondering if we could talk.’”

Today, Scott’s work has brought him back into the military full-time, where he is responsible for the strategic policy and direction for the Canadian Forces Health Services Reserve.

Unaccustomed to a more measured pace of life, Scott is already looking at a way to make it back into the U of A fold.

“I’m hoping to have the adjunct assistant professor affiliation for the three years I’m with the military. After that, who knows, maybe I can get a job as a prof at the U of A.”