From Syria to UAlberta

I feel like I’m a part of a big family from all over the world, from all nations and cultures, which shares the passion for learning.

English Language School student hopes to be among 25,000 refugees resettled in Canada. 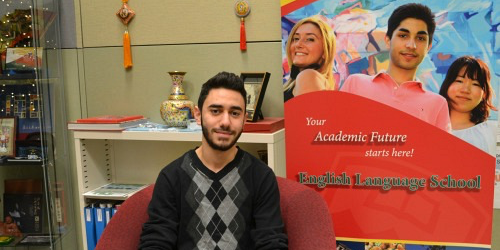 Badi Jabbour hopes to use the English language skills he's learning at UAlberta to study medicine.

“It was a great moment, to finally get here.” That’s how 19-year-old Badi Jabbour, a student from Syria currently enrolled in the Faculty of Extension’s English Language School, describes the moment he arrived in Canada.

Since September, Badi has been taking English classes as part of the school’s EAP (English for Academic Purposes) program, on a scholarship offered by the faculty to ease his transition into Canadian culture. “I am thankful for having the chance to start a new academic education at one of the top universities in Canada,” he says.

Badi came to Alberta on a temporary visa along with his mother Ghada Bachour, a scholar currently on a one-year placement with the U of A’s Faculty of Pharmacy and Pharmaceutical Sciences. Ghada’s placement is the result of a partnership between the university and the Institute of International Education, a U.S.-based not-for-profit organization that helps at-risk scholars from various parts of the world.

Ghada’s stay can be extended for up to two years, but Badi is hoping he and his mother will be among the 25,000 Syrian refugees that Prime Minister Justin Trudeau intends to allow into the country by February 2016. He also hopes that the English language skills he’s building through his classes will one day be applied in the university as he studies medicine to fulfil his dream of becoming a doctor.

“Here people are so understanding, so open-minded,” says Badi. “At the ELS classes, I feel like I’m a part of a big family from all over the world, from all nations and cultures, which shares the passion for learning.”

Badi says having the chance to talk to other students in English helps him and his classmates to learn about each other’s cultures: “The fact that each one of us came from a different background only makes the learning process more enjoyable.”

Badi Jabbour was recently featured in this interview with Global News.

From Syria to UAlberta
Newsroom