From vacation to vocation

“With passionate and committed educators like Nabeel entering the teaching profession, the world is in good hands.

Education grad Nabeel Jaffer went to Nepal for the mountain biking but ended up helping young women reclaim their education. 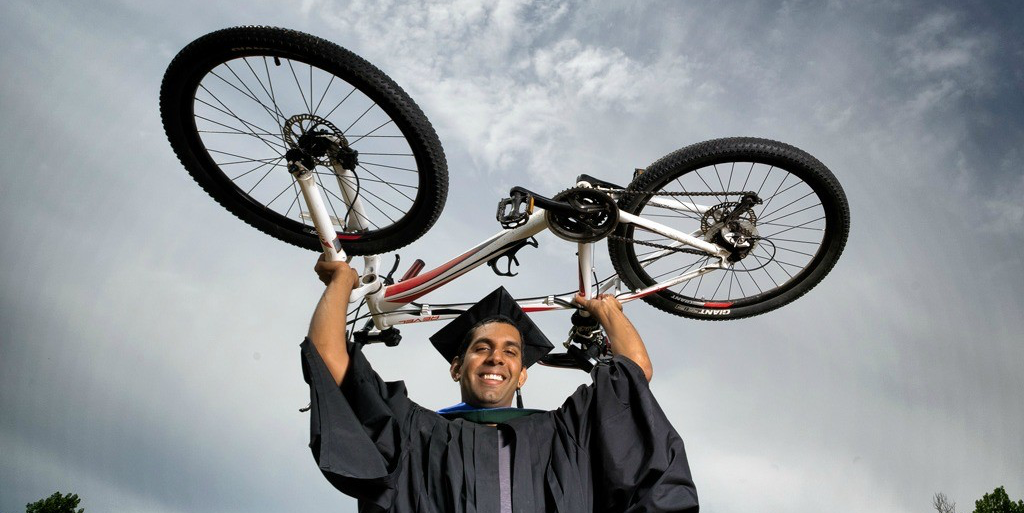 (Edmonton) When the friendly and entrepreneurial 27-year-old hands you his business card, the first thing you see are the words “TOILET NERD” emblazoned under his name in uppercase letters.

Nabeel Jaffer doesn’t take himself too seriously, but once you get him talking about his passion—a non-profit organization called the Manavta Project that builds sustainable sanitation facilities at rural schools in Nepal—he is all business.

Out of the comfort zone

Originally from Calgary, Jaffer graduated from the University of Calgary in 2011 with a bachelor of arts degree. He didn’t know it then, but his major in economics and minor in microbiology would come in handy later on in his development work.

In 2012, Jaffer travelled to Nepal for the first time. “I don’t like to stay in one spot for too long,” he explains. “I like to be out of my comfort zone—I flourish in that.”

The plan was to stay five months, but then five turned into eight, and eight months turned into a year. When he wasn’t trekking in the Himalayas, rock climbing, mountain biking or hanging out with the locals, Jaffer was volunteering for a local non-governmental organization named Chhimeki. Chhimeki works to improve the health and nutrition of pregnant and postnatal mothers and their families living in the Kathmandu Valley.

“Before I left Canada, I had read the book Untouchables, about Dalit women, and I was shocked at the social taboos and the way that women were treated,” says Jaffer.

In remote areas of Nepal, girls stop attending school when they begin their menstrual cycles because of a lack of infrastructure (toilets). “I saw an opportunity to bring education into the real world,” says Jaffer. “The chronic lack of sanitation means the loss of dignity and safety for many young girls. If you bring facilities closer to them—to schools—it’s safer,” says Jaffer. “Feminine hygiene materials can be changed, and girls can reclaim access to education.”

NGO work helped him understand the power of education. “It’s about life skills, and it’s about community. It’s not just about classroom learning.”

Jaffer credits his education degree at the U of A with helping him develop his leadership skills and his ability to deal with different people.

“André Grace was really approachable. I had a good idea, and I presented a project that would connect education to the real world. He listened to me and he got it. I didn’t have to explain why; he understood exactly what we wanted to do.”

Jaffer notes that Grace was concerned with him as a person, not just as a student. “He connected me to his network and helped me establish my own name at the U of A. One time he asked me, ‘How are you going to feed yourself?’ That’s something my father would say!”

From his vantage point, Grace was struck by Jaffer’s enthusiasm and deep commitment to his organization and its work. “I met Nabeel when he took a course on adolescent development. During that term we had animated discussions about Manavta,” says Grace. “Nabeel has used his studies in our Faculty of Education to hone his skills as a social educator who sees students in terms of their holistic needs that link living and learning.

“Nabeel knows a school can be the heart of a community, a place where students and the broader community can learn about healthy living,” Grace adds. “With passionate and committed educators like Nabeel entering the teaching profession, the world is in good hands.”

Jaffer says the recent earthquakes in Nepal have made the services of organizations like Manavta more necessary than ever. “We are trying to get through some bureaucracy issues to get charitable status,” he explains. “It is really hard to be here, knowing that I can’t even send money to my friends, can’t set up a side campaign.”

Jaffer reports that a project Manavta had set up in Surkhet in western Nepal was spared from the quake’s devastation. But he is taking the opportunity to learn more about disaster response. “I’m learning about emergency sanitation, and while it is really frustrating, it is also an opportunity to re-evaluate where we should be putting our efforts.”

Jaffer will soon be where he is happiest, out in the field, working on projects and learning by experience. But this may not be the end of classroom learning for him: through his experience and travel he has developed a strong interest in cultural anthropology.

“A prof asked me once, ‘What do you want to be doing in 10 years?’” Jaffer recalls. “And I said, ‘I want to be building toilets, because 2.5 million people in the world don’t have them.’”

From vacation to vocation
Newsroom