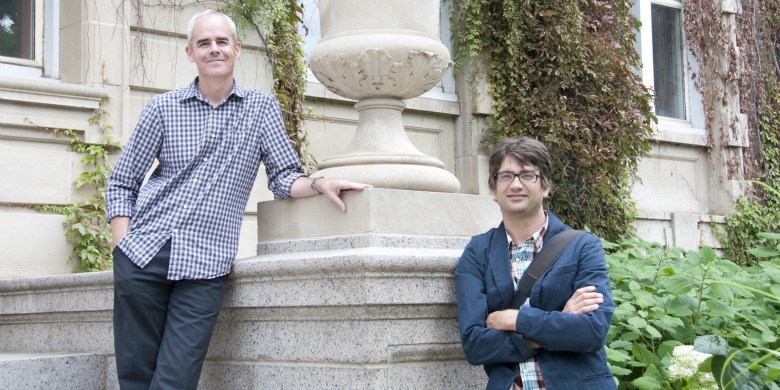 (Edmonton) Stephen Charbonneau and Donald Holly belong to an illustrious group that includes such notable alumni as John Lithgow and Dolph Lundgren. But Charbonneau and Holly aren’t actors; they’re Fulbright scholars. They can also assert something Lithgow or Lundgren cannot: their presence at the University of Alberta.

Holly, an associate professor of anthropology at Eastern Illinois University, and Charbonneau, an assistant professor of film studies at Florida Atlantic University, will spend the next four months at the U of A working with students and faculty while reviewing and furthering their own research projects. Both scholars found the university suited their quest for learning and discovery.

Charbonneau counts himself fortunate in his fellowship, especially given the connective subject matter of his research: a book project on how and why particular Canadian documentary filmmakers influenced documentary filmmaking in the United States. He says this experience enables him to create a dialogue with fellow researchers and students on the extensive research he has conducted already—a process he hopes will be enlightening and beneficial. With the U of A’s strong interdisciplinary program and the presence of the Alberta Institute for American Studies, he values the opportunity to promote the significance of cross-cultural scholarship.

“This is a once-in-a-lifetime opportunity for me and a chance for me to share my research material with faculty members and students, and to start conceptualizing and writing,” said Charbonneau. “[The U of A has] great scholars; I know just by engaging in dialogues, sharing research and participating in colloquia, I’m going to be changed.”

This is Holly’s second Fulbright junket to Canada. (His first, as a grad student, took him to Newfoundland.) This time, he will be working on a book with a distinctly Canadian connection. Although his expertise lies in the realm of eastern sub-Arctic archeology, he’s hoping to exchange ideas and knowledge with U of A researchers who specialize in the western sub-Arctic. Exchanging information and ideas is important to Holly, but he also foresees a longer-term dividend from his time here: networking.

“There are a lot of reasons to come to the University of Alberta, for me. I’m looking forward to the connection with First Nations communities and learning from the native studies perspective,” said Holly. “I hope to come away with some colleagues too. I think that’s what the Fulbright is about—creating relationships that carry on with you through your career.”

Established in 1946, the Fulbright Program is a merit-based grant for international educational exchange for students, researchers and professionals. Under the scholar grant, American scholars and professionals are given the opportunity to conduct research, lecture and consult with other scholars and institutions abroad for up to one year.