If a firewall exists, not only would an infalling object be destroyed by it, but the destruction could be visible, even from the outside. 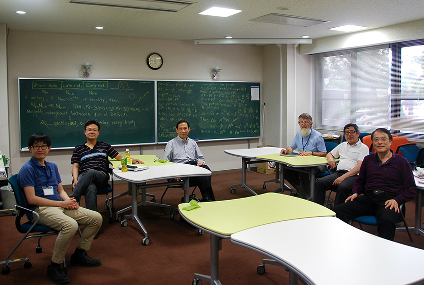 The five authors of the paper with another colleague during the discussion at the Yukawa Institute for Theoretical Physics (from left): Dong-han Yeom, Yen Chin Ong, Pisin Chen, Don Page, Yasusada Nambu and Misao Sasaki.

In what would seem like a bad romance novel, physicists, using words like "naked" and "no-drama," are attempting to write the Universe's hottest work of non-fiction, a complete description of the weirdest objects known to humanity: black holes. 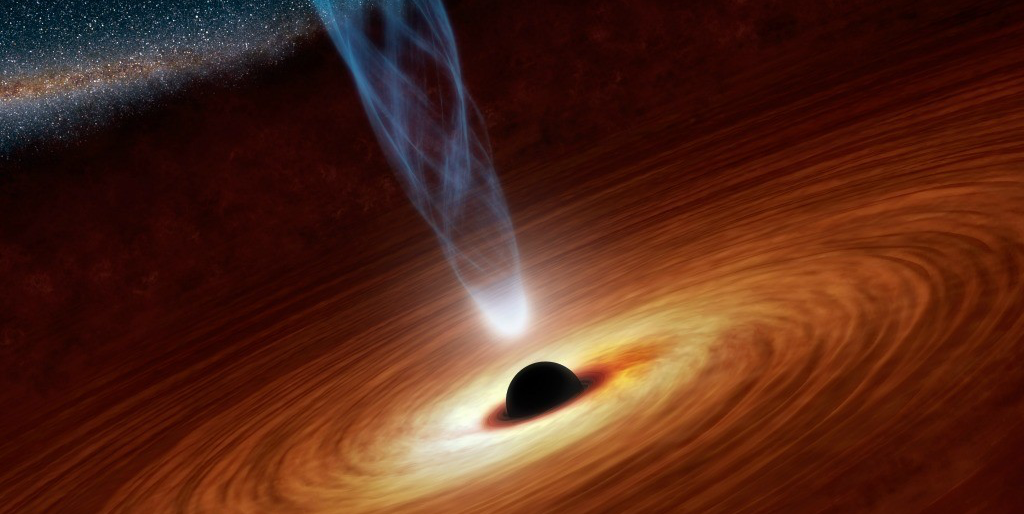 Artist's concept illustrating a supermassive black hole with millions to billions times the mass of our sun. (Image: NASA/JPL-Caltech)

For the last four years, physicists studying the mathematicalunderpinnings of black holes have been wrestling with a strangeidea: that black holes contain a region known as a "firewall," which utterly annihilates matter that dares to cross itsboundaries. However, a new paper titled Naked Black Hole Firewalls,co-authored by University of Alberta physics professor Don N. Page,aims to attack the fundamental tenets that give rise to this strangeidea—with something much stranger.

“The putative black holefirewall is one of the hottest problems in physics today, and we hopethat our paper makes a significant contribution to the field,” saysPage. “As part of the University of Alberta community, I've beenprivileged to be able to interact with many others in this field aroundthe world.”

The classic picture of a black hole comes directly from Einstein's theory of general relativity: a massive object warps the fabric of spacetime and, given sufficient material, this region of spacetime becomes so steep that not even light has sufficient speed to escape. Because no light can escape, these objects became known as black holes, entering our cultural consciousness as the universe's most terrifying garbage disposals. A hapless space traveller entering the black hole's event horizon, according to this model, would be completely destroyed inside the black hole.

Despite their apparent simplicity, however, black holes have been devilishly difficult to describe, and in the 1970s, physicist Stephen Hawking proposed that some particles could in fact escape from a black hole through a process involving the creation of entangled particles, in a theory now known as Hawking radiation. Since then, the field of black hole physics has been a wellspring of interesting phenomena, requiring the mathematics of both quantum theory and general relativity for a complete description.

In the intervening four decades, an outstanding problem—the black hole information paradox—has continued to stymie physicists as a direct result of introducing the mathematics of quantum theory into the mix. “At first, most scientists working on Einstein's theory of gravity thought Hawking's original suggestion was right, that information is lost when black holes form and evaporate," says Page, who wrote the first paper objecting to Hawking's suggestion. "Now most, though not all, gravitational physicists, including Hawking himself, believe that information is not lost. However, it is still mysterious how the information is preserved in detail."

In quantum mechanics, the two principles of quantum determinism and reversibility suggest that information must always be preserved. But since material falling into a black hole—along with the information describing that material—are apparently annihilated sometime after they cross the event horizon, physicists have been left scratching their heads about this seeming inconsistency.

The paradox itself arises due to Hawking radiation, which demonstrates that matter can be emitted from a black hole, but initially it appeared that no information about the matter that once fell into the black hole is carried away. In 2012, a group of physicists studying this paradox found that three basic assumptions involved in this paradox cannot all be consistent.

Namely, principles of unitarity and local quantum field theory contradicted the assumption of “no-drama”—meaning that nothing unusual should happen when an object falls through the event horizon. Instead, they proposed that the most conservative solution to this contradiction is that there would indeed be "drama" at the surface of the black hole in the form of a "firewall" that would destroy an infalling object. This seems rather surprising, because the curvature is negligibly small at the event horizon of a sufficiently large black hole, where general relativity should hold and one would expect nothing special when crossing the horizon.

"So-called firewalls, or high-energy density regions that we would otherwise think of as the surface of the black hole, would destroy anything falling in," explains collaborator Pisin Chen at the National Taiwan University.

The putative position of the firewall is something that didn't sit well with the authors of the paper, who began work on this project at a workshop at the Yukawa Institute for Theoretical Physics in Kyoto, Japan. Since the firewall was proposed to be hidden behind the event horizon, an observer travelling past the gently curved event horizon of a large black hole, hoping to glimpse its interior, would instead be instantly incinerated the moment they passed behind the veil. Attacking the fundamental tenets used to create the firewall, the authors demonstrate that this region of quantum-mechanical destruction can strangely migrate to a region outside of the black hole due to the quantum fluctuations of the Hawking radiation, allowing an observer a full-frontal view of a black hole's "naked firewall."

“If a firewall exists, not only would an infalling object be destroyed by it, but the destruction could be visible, even from the outside,” says Misao Sasaki, a contributor from Kyoto University.

Page emphasizes that such a "naked firewall" outside of the event horizon is problematic. If a firewall actually exists, the authors argue that it wouldn't simply be confined to a region within the black hole, but its destructive power could reach beyond the limits of the event horizon, into a region of space that could be observed.  This makes the notion of firewalls less conservative than previously thought, and suggests putting more effort into finding a better solution to the firewall paradox.