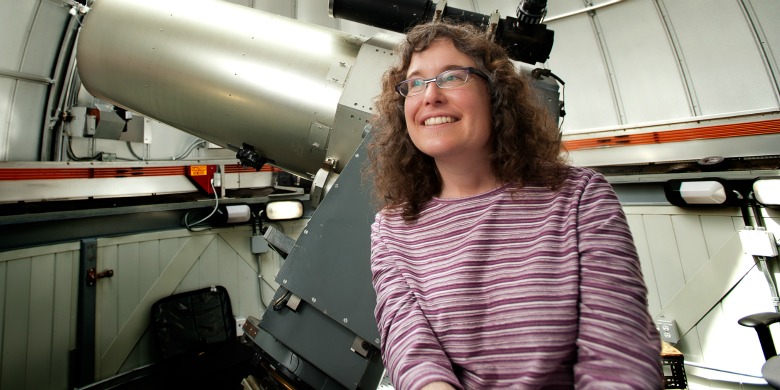 120517-sharonmorsink-banner02
U of A astrophysicist Sharon Morsink at the observatory in the Centennial Centre for Interdisciplinary Science (Photo: Richard Siemens)

(Edmonton) The efforts of a University of Alberta astrophysicist to introduce school kids to the wonders of the solar system and beyond are getting a boost of $50,000 over three years from a national funding agency.

The impact of Sharon Morsink’s Sky Scan program has been recognized by the Natural Sciences and Engineering Research Council of Canada (NSERC) under its PromoScience program. Sky Scan has opened the skies to more than 1,100 Edmonton kids in grades 6 and 9.

While Morsink administers the program, Sky Scan’s outreach demonstrator, Diane Wong, has visited 26 city schools since the program began in September. Sky Scan has also hosted 33 school visits to the U of A’s new space observatory atop the Centennial Centre for Interdisciplinary Science.

Evening visits to the observatory can open the children’s eyes to planets like Jupiter, but even daytime tour groups get an eyeful of outer space.

“During the day we use the solar telescope to show sunspots and a hydrogen alpha telescope to allow students to watch giant loops of gas forming on the surface of the sun,” said Morsink. “It shows them the powerful electromagnetic activity of the sun, and seeing it actually happen is a great learning experience.”

Morsink says Sky Scan is designed to fit in with the Alberta teaching curricula for astronomy and space science in grades 6 and 9. “The NSERC award, along with funding from the local branch of the Royal Astronomical Society, will enable us to extend our classroom visits to schools in outlying rural areas.”

“We’re not trying to turn all these children into future astronomers, but our goal and the university’s outreach goal is to get kids interested and excited about science,” she said.

NSERC is a federal agency that helps make Canada a country of discoverers and innovators. Through its PromoScience program, the Government of Canada will provide $2.4 million to 49 organizations promoting science and engineering to young Canadians.

Morsink says you don’t have to be a Sky Scan student to come out to the U of A observatory on the evening of Sunday, May 20, to watch a partial eclipse of the sun. The observatory will be open to the public from 6:30 to 8:30 p.m.