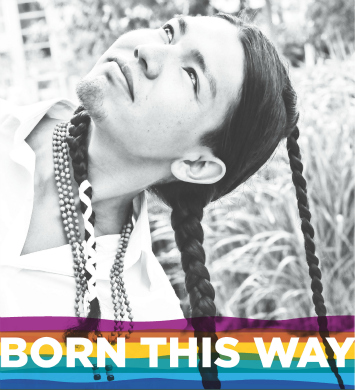 121019-bornthisway-banner
James Makokis will speak about his remarkable journey as a two-spirited person at the Born This Way conference Nov. 2 and 3. (Photo: Irene Austen)

(Edmonton) James Makokis knew from the tender age of three that he was two-spirited. As a little boy he loved to play with dolls, and under the gentle care of Kokums—grandmothers at his daycare in the Saddle Lake Cree Nation—he played dress-up, and was accepted.

But that quiet acceptance evaporated when Makokis entered school, where he was bullied for being gay. In his senior year, to get away from the torment, Makokis moved away from his First Nations home to live with his sister in Edmonton. There, he finished Grade 12, earned a science degree at the University of Alberta and went on to medical school in Ottawa. Today, he is a doctor serving the people of the Siksika Nation near Calgary.

Makokis also lives with his partner in Edmonton, where they’ve just bought their first home and are building a life together as a proud, confident couple.

Having reached a good place in his life journey, Makokis is hoping that the same opportunities for other two-spirited Aboriginal people will arise from a conference being hosted by the U of A Nov. 2 and 3. He will be one of the speakers at the event sharing their perspectives.

The Born This Way conference, the first of its kind to be hosted in Alberta, offers an open door to discussion and understanding of two-spirited people—those who are gay, lesbian or transgendered—and of the toll that colonization, Christianity and homophobia have taken on acceptance of two-spirited people in Aboriginal cultures and communities.

“The conference will be a safe space for dialogue on issues of sexuality, gender and alternative ways of being, and I hope it will filter out to the communities, where we can have discussions about two-spirited people and creating safe spaces for our youth,” Makokis said.

The Born This Way conference, being held at Campus St. Jean, builds on the success of the inaugural 2011 AMIQAAQ conference, also sponsored by the U of A. Amiqaaq, an Inuktitut word meaning “share,” symbolized the theme of last year’s event, which brought together First Nations, Inuit and Métis knowledge keepers to share their stories and create understanding for Aboriginal ways of being.

This year’s event extends that quest for understanding to the Aboriginal sexual-minority community. Born This Way gathers community, youth and academic perspectives to share and learn from indigenous knowledge as it relates to two-spiritedness.

“This event is a gathering of First Nations, Inuit and Métis knowledge-keepers who will share their views of two-spiritedness,” said Tracy Bear, special advisor to the provost and head of Aboriginal initiatives for the U of A.

The Office of the Provost and Vice-President (Academic) partnered with the U of A’s Institute for Sexual Minority Studies and Services, Status of Women Canada, the Two Spirit Circle of Edmonton Society and Edmonton’s Exposure Festival Committee to organize the vibrant two-day gathering.

The university is pleased to support the sharing of Aboriginal knowledge in all aspects of life and, in particular, to foster communication about this year’s theme, Bear said.

“We are encouraging discussion to break the silence around the issues of sexual and gender differences that exist in our Aboriginal cultures and communities, and this increases understanding and acceptance.

“Ultimately, we want to promote respectful campus and community dialogue about sexual and gender diversity in today’s indigenous societies.”

Makokis is centring his conference address on how Christian colonization historically influenced the treatment of two-spirited people, and how traditional Cree teachings respect and accept all perspectives.

“It is asking people to go back to the original teachings from our Creator. Indigenous communities have always valued diversity and different perspectives; every person was important when you had to work together for food and shelter.”

Makokis is particularly concerned about high suicide rates among two-spirited indigenous youths. He says there is “work to be done around intolerance and homophobia in our communities,” and a need to engage elders who can pass on traditional teachings about the valued place of two-spirited people.

“Going back to these teachings may help address some of the bullying and suicide epidemics we have in our communities.”

The conference lineup includes several other speakers and performances exploring related topics, including learning about two-spirit cultures and communities, and shared stories of personal struggle, advocacy and healing.

Learn more or register for Born This Way