Get your motor running 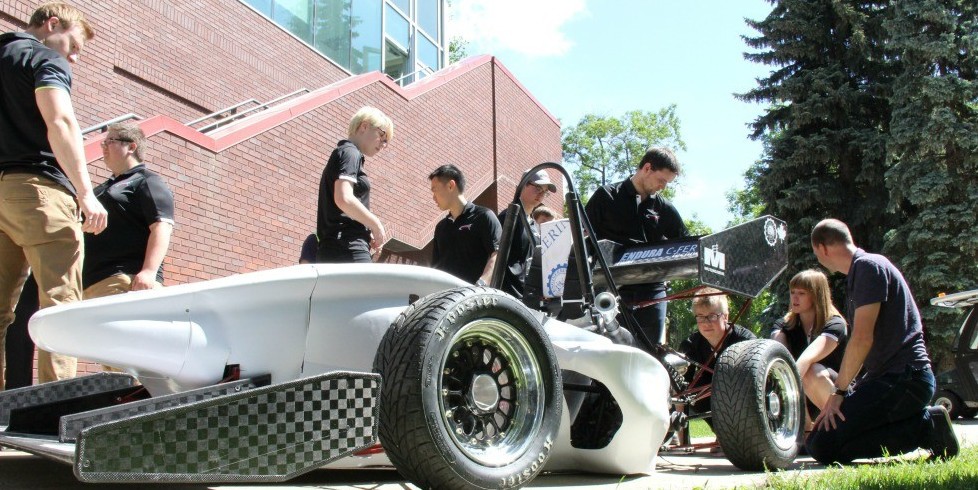 Members of the UAlberta Formula SAE race team show off the vehicle they designed and built before heading to an international competition in the United States.

A team of University of Alberta students is at the starting line and revving the engine as it prepares to race its formula-style car at an international student design competition in the United States.

The Formula SAE student team has designed and built its car for autocross races, with vehicles and drivers demonstrating speed and agility, hitting high speeds on straightaways then whipping through slalom-like sections of the racetrack.

Organized by SAE International, the competition runs until June 18 in Lincoln, Neb. About 80 student teams from around the world are competing at the event.

Team leader Chris Taschuk, a mechanical engineering student, says the team’s ranks were somewhat thin a year ago, with many of its most experienced members having graduated.

“We had to build the team and then build the car,” he said. “And that’s exactly what we did—we’ve all become fast friends.”

The pretence of the competition is that the team is a small engineering design-build company that builds a prototype race car and pitches it for mass production. The vehicle needs to pass rigorous technical tests before it advances to the track, and the team must deliver a presentation and engineering documentation to a panel of judges from high-profile companies such as Tesla, Honda and SpaceX.

During an unveiling event held before leaving for Nebraska, Taschuk said the team members have put all their engineering knowledge and time into the car.

“I rid myself of a social life when I said I’d lead the team,” he said. But he has no regrets—he’s confident in the team and the car.

“This has been the biggest single achievement of my academic career.”

Get your motor running
Newsroom