Getting a clearer picture on alcohol addiction 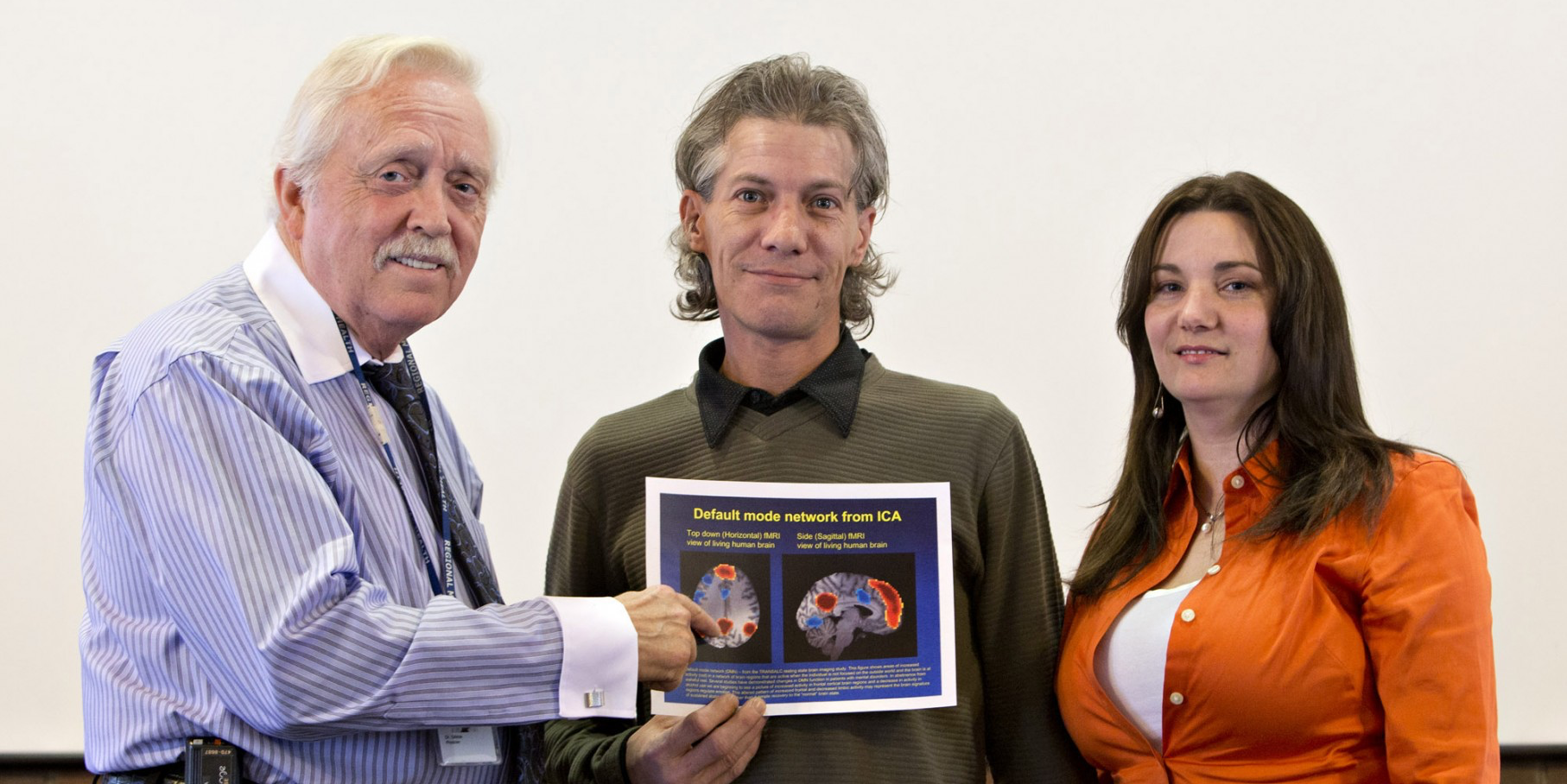 (Edmonton) It had been a downward spiral for years, but when Kirk Haakensen found himself utterly alone last Christmas after years of depression and extreme drinking, he decided to take action and the first steps toward a healthier life.

“When it became too much, I just couldn’t deal with it on my own anymore and I realized I needed to get help,” says the 43-year-old Edmonton musician. “I came to the Henwood Treatment Centre—and it was great.”

As he successfully completed his residential program earlier this year, Haakensen also stepped up to take part in, and benefit from, clinical research that uses brain imaging and drug therapy to better understand how microscopic changes in brain connectivity relate to alcohol dependence and recovery.

The TRANSALC project uses a magnetic resonance imaging scanner to take "snapshots" of the brains of newly abstinent patients, then compares them with snapshots taken a month later, to look for signs of how the human neural network begins to mend itself during recovery. Researchers aim to use brain imaging to develop personalized treatment and medication plans for people with drinking problems.

“There’s a host of literature on how alcohol damages the brain,” says psychiatrist Tim Gillese. “Much less is known about how fast, or what the mechanisms are, for brain recovery.

“More recently, we’ve become aware of the genetics of how the drug naltrexone treats human alcoholism. We’re curious to know what changes take place in the brain with this drug that accentuate the recovery process, and how it extends the time between relapses.”

Naltrexone is used mainly in medical management of alcohol dependence. Since the early 1990s, a number of studies have confirmed its efficacy in reducing frequency and severity of relapse to drinking.

This research is a partnership between Alberta Health Services’ Henwood Treatment Centre and the University of Alberta's Faculty of Medicine & Dentistry. Groups within the university involved in the TRANSALC project include the Department of Psychiatry, the Neurochemical Research Unit, the Department of Biomedical Engineering and the Peter S. Allen MR Research Centre. With its adult residential treatment program, Henwood assists with recruiting appropriate clients to participate in the study.

“We’ve reached out to the university to make connections and found an affinity with its research department,” says Jasmine Fulks, Henwood clinical supervisor. “This research is an important piece of the puzzle in filling in how alcohol addiction works—and how it can be treated.”

Serdar Dursun leads the U of A team of Tim Gillese, Andy Greenshaw, Matthew Brown, Allan Aubry and clinical research nurse Marnie MacKay, who are the sole Canadian contributors to an international collaboration underway at sites in Germany, Finland and Spain.

“We hope to predict that a patient will do particularly well on an anti-alcohol pharmacological intervention,” says Dursun, also a professor of psychiatry. “Then clinicians will be able to prescribe these medications, using a highly personalized approach, for the patient’s benefit.

“Currently, we have no specific predictors, no markers, and our existing treatment options can be trial and error. Naturally, we want to avoid trial and error. We hope to come up with specific, selective neuromarkers, through imaging, which we can then use to make a particular, personalized decision on an individual’s treatment.”

Haakensen is one of about 20 participants who have been in the study for at least one month and two MRI scans.

“If there’s anything I can do to help people with alcoholism, I owe that to the community. I’m happy to do it,” he says. “The care has been outstanding. Those Henwood people are saints. They care about everybody there and they do whatever it takes to help each person as an individual. I was really impressed.”

“I think this is a big advance in moving toward better continuity of care,” says Greenshaw, professor and associate chair of research in the Department of Psychiatry. “We’re interested in what happens in the brain in the short term when somebody stops drinking. Does the brain go back to normal? Does the brain change in a way that enables a person to stop?

“We’re already seeing some early changes in brain pathways that relate to decision-making and to the reward system of intoxication. It’s almost like you’re turning down the reward system and turning up the system that’s responsible for inhibiting behaviour.”

A Health Canada survey indicates that 76.2 per cent of Albertans drink alcohol. Most who drink do so moderately and responsibly. However, when alcohol is misused, it can cause considerable harm to people and communities. Annually, alcohol abuse costs Albertans $855 million in lost productivity, $407 million in direct health-care costs and $275 million for law enforcement.

Getting a clearer picture on alcohol addiction
Newsroom