Getting a grip on ticks in Alberta 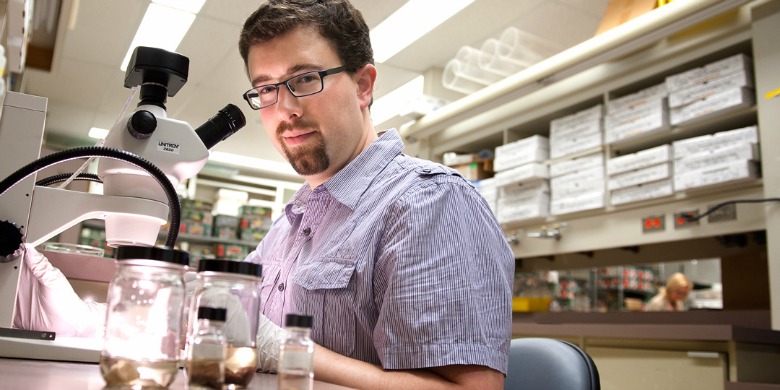 120711-danielfitzgerald-banner
Daniel Fitzgerald studied a sample of ticks from across Alberta. His results showed 16 species, including one known to spread Lyme disease. (Photo: Richard Siemens)

(Edmonton) A University of Alberta study is providing an updated snapshot of ticks in Alberta for the first time in 40 years—and it’s showing the presence of a harmful species not previously thought to be living here.

To earn his master’s thesis, Daniel Fitzgerald, a student in the U of A Department of Agricultural, Food and Nutritional Science, surveyed a sampling of ticks that were picked off of pet dogs and sent in by veterinarians across Alberta.

Fitzgerald hopes his U of A-based research will shed light on what species of ticks are living in the province, and will lead to further exploration and awareness about ticks in Alberta.

“The work I’ve been able to conduct at the U of A has been valuable in laying the groundwork for further investigation into the situation,” he said.

The results showed 16 species of ticks; five species were most frequently recorded, and of those, two were not thought to have been living in Alberta. One of them—Ixodes scapularis—is known to spread Lyme disease, a bacterial infection harmful to humans.

“The number of Ixodes scapularis identified was very surprising. This is strong circumstantial evidence that something is going on with this tick in Alberta. This suggests we have to get out in the field and try to capture more life-cycle stages of this tick for more information,” Fitzgerald said.

His research involved data gathered between 2007 and 2010, from nearly 1,200 ticks removed from more than 800 hosts. A total of 108 ticks sent in by vets were tested during that time; of those, 22 tested positive for presence of the Lyme disease pathogen. Sixteen of those 22 ticks were from dogs that had not travelled outside the province.

Ixodes scapularis is known to live in the United States on the Atlantic Coast and in Michigan, as well as in Canada in southeastern Manitoba, Quebec, Ontario and the Maritimes. Although Alberta is home to ticks, “We’ve never before found so many of the species that can transmit Lyme disease pathogen here in Alberta,” Fitzgerald said.

Fitzgerald noted that if Ixodes scapularis is found to be established here, “Lyme disease could be seen more often in Alberta.” He also noted that if the tick is confirmed to be in the province, a person’s travel history could no longer exclude a medical diagnosis of the disease. “Perhaps doctors will no longer consider a lack of travel outside Alberta as part of making a diagnosis of Lyme disease.”

Fitzgerald’s study also revealed that more than half of the dogs carrying ticks had travelled outside the province, and that most of the ticks came from dogs living in either Edmonton or Calgary. Nearly one out of three ticks on a dog was discovered by a vet; the owner didn’t know there were ticks on the pet.

“People may think they have to go somewhere to get a tick, but they don’t. Ticks can be found nearly everywhere people live in Alberta,” Fitzgerald said. “You can get one in tall grass, any park, even in backyards. They are a part of everyday life here.”

Fitzgerald’s research was supported by Alberta Agriculture and Rural Development.

Getting a grip on ticks in Alberta
Newsroom