Getting to the FACTS on climate change 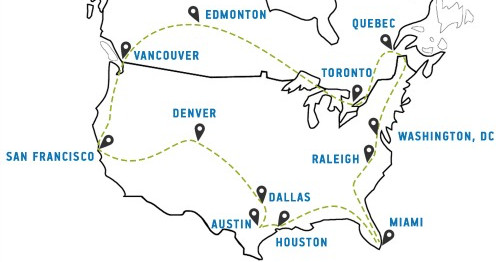 UAlberta is one of 12 North American stops for the FACTS talks on climate change and energy transition in the lead-up to a UN climate change conference this December.

On the road to Paris for December’s United Nations conference on climate change, the University of Alberta offers an informative stop along the way for people to learn more about this pressing global issue.

The U of A, in partnership with the Consulate General of France and the University of Calgary, hosts a free public conference Oct. 29 that explores the challenges of climate change and energy transition.

The companion event is a lead-up to the United Nations Climate Change (COP21) conference being held in France in December. COP21, the 21st Session of the Conference of the Parties to the United Nations Framework Convention on Climate Change, is bringing together world leaders to reach a new international agreement on the climate, with the aim of keeping global warming below an increase of 2°C.

“This event is an excellent opportunity to rethink what we know about climate change and energy transition and get more information about this issue,” said conference organizer Alex Kuznetsov, regional manager (Europe) for University of Alberta International. “It’s a crucial topic for this province.”

“The French Consulate wanted to involve the University of Alberta, as one of the education leaders in Canada, in hosting a FACTS event,” Kuznetsov said. The university currently collaborates with France on climate research (such as an international workshop on glacier calving held in Grenoble), and is home to a strong network of climate scientists, he noted. “The U of A has an interdisciplinary approach to climate change; we have many faculties that work on climate change issues from different perspectives.”

Simon Dyer, director of the Pembina Institute, delivers the keynote address at the U of A FACTS event and then a panel of scientists, policy makers, energy companies and business entrepreneurs will focus discussion on how energy transition—moving from non-renewable to renewable sources of energy—can contribute to solving the climate change challenge.

It is one of the pressing questions on the Paris agenda and for Albertans, Kuznetsov noted, adding that the university serves as “an open platform for such an important discussion.”

“What is the solution for the province in terms of moving to more eco-friendly energy? And there are other related issues such as employment and reputation of the province abroad. It’s important for the U of A to moderate among various stakeholders to have this conversation to find solutions that will work for Albertans.”

The panel of experts leading the discussion includes Emilson Silva, professor in the Alberta School of Business and Campus Alberta Innovates Program Chair in Innovation Policy and Technology Translation in Water and Energy. Other panellists include representatives from TOTAL Canada, Clean Energy Canada, Alberta Innovates - Energy and Environment Solutions and the Consulate of France. People can view a livestream of the event, and after the panel discussion, questions will be taken from the public.

The mix of experts on the panel will share “crucial perspectives on climate change,” Kuznetsov said. “People can ask them questions and will be able to look at this issue through the different lenses of academia, business and international perspectives. This is a brainstorming and learning experience. Many Albertans are generally aware of climate issues, but it’s good to look at problems from different perspectives and the interpretation of others. It makes us aware of what the problems and potential solutions are.”

Getting to the FACTS on climate change
Newsroom