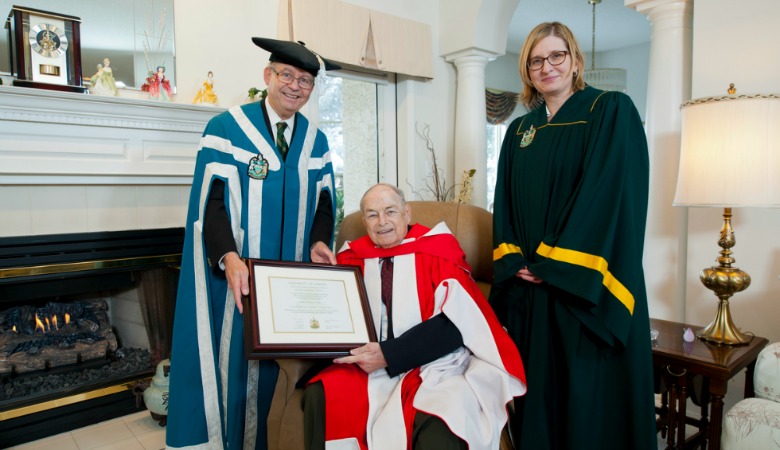 (Edmonton) Former Alberta premier Don Getty reflected on pivotal moments in his life and encouraged new University of Alberta graduates to be strong leaders, as he was awarded an honorary doctor of laws degree Nov. 19.

Unable to attend the ceremony in person for health reasons, Getty wrote the address to graduands, which was delivered by his son Darin, one of several family members in attendance.

In his address to graduates from the faculties of arts; extension; agricultural, life and environmental sciences; business; nursing and Campus Saint-Jean, Getty, who was the province’s 11th premier from 1985 to 1992, urged them to aim high in life.

“I have never for one moment regretted that I had aspiration—that after I graduated, there were moments where my reach did indeed exceed my grasp. It brought many joys, constant stimulation and some serious obstacles, which ultimately resulted in a genuine sense of accomplishment, and exposure to worlds I could never have dreamt.”

Getty thanked the U of A for bestowing the degree, which was awarded privately to him Nov. 16 by a small delegation from the university.

“It is a true honour, coming from a university which has meant so much to Alberta,” he noted in the speech, adding that the U of A “has a unique and important place in the province of Alberta, and I always respected that when I was premier.”

Sending his best wishes to the graduating class, Getty paid particular tribute to the graduates of the Faculty of Agricultural, Life and Environmental Sciences, which is approaching its 100th anniversary in 2015.

“No matter what happens in the world, agriculture will always remain a cornerstone of Canada’s security and strength.”

Recounting the defining moments of his political career as a Progressive Conservative, Getty singled out the province’s energy resources as a source of pride for Albertans, even as the industry needs to strike a balance with environmental impacts such as climate change.

He recalled his duties as energy minister 40 years ago, and the fierce debates with the federal government at the time to allow Alberta to control its natural resources.

“Now, most of you in this room will not remember the details of those energy debates, which dominated the nation for a good number of years, with epic figures like Pierre Elliott Trudeau and his ministers, with whom I sparred on more than one occasion.”

And though that struggle is past, Getty urged his audience “never to take our energy assets for granted” and to remember that the industry “has taken Alberta to a very different place in the world. We and Saskatchewan were once the poorest and most vulnerable places in Canada.”

Energy brought with it prosperity and “allowed us to build this great university,” as well as leading research facilities like the Walter C. Mackenzie Health Science Centre, Getty added.

The former leader also reflected with pride on reaching an agreement—the first of its kind in Canada—with Métis settlements in Alberta in 1989, giving them the right to self-government after “a century of neglect.”

Arriving in Edmonton for the first time in 1955 from Ontario as a football player for the Edmonton Eskimos, his wife Margaret by his side, Getty said he never knew “how much Alberta would get into our blood.”

The couple made the province their home, raising their four sons and helping build Alberta. “That was the first of many decisions we would make together about aspiring to leadership positions, whether in football, business or in public life. Because whether you are a quarterback or a premier, you will be judged!” Getty said in his speech.

He encouraged the new graduates to be fearless in stepping up to challenges, and used a football analogy to make his point.

“You will get cheers and that can feel pretty good at times, but a crowd can get mighty restless when you throw a bad pass. I like to think I could take those moments with a shrug and accept the fact that football fans, just like political electorates, have the right to their opinions and even their fickleness—and we must be prepared to accept their judgments.”