DiscoverE notches another Canadian first for innovative program to teach computer programming to girls in grades 3 to 9. 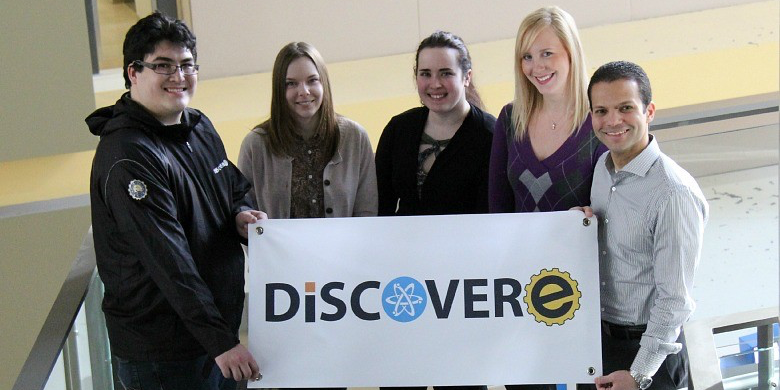 (Edmonton) The DiscoverE outreach program in the University of Alberta’s Faculty of Engineering has won a prestigious Google RISE Award for the second year running, and plans to use the prize money to grow its initiative to teach computer programming to girls.

DiscoverE is the only program in Canada to have won two RISE awards; last year it became the first Canadian group ever to win the honour.

This year’s award and $30,000 in prize money is directed at DiscoverE’s innovative Girls Coding Club, the only program in Canada teaching computer programming to girls from grades 3 to 9.

“In DiscoverE we move from inspiring kids in science, technology, engineering and math to empowering them, to move them from consuming technology to producing technology,” said Mohamed El-Daly, the Faculty of Engineering’s outreach co-ordinator. “We don’t want them to sit around and wait for someone to write software for them; we want to give them the tools to address their problems or the problems of the community.”

The Girls Coding Club started last fall as an offshoot of popular coding programs offered to girls in the DiscoverE summer camps. The 40 spots filled quickly, with a waiting list of 20 applicants. The 2014 session started in January.

Girls in the club are split into two groups, from grades 3 to 5 and grades 6 to 9. Both groups are taught Scratch and Python, a common computer language, and learn about concepts like sorting and sequencing, and how computers work. Mentors from the IT industry visit the club to talk about what they can accomplish with coding skills and career possibilities.

In the current session, girls are looking at problems they have around them to see whether they can write the code to make things better.

“All of the spots filled up quickly, and feedback from parents and the girls was overwhelmingly positive,” said El-Daly.

“I had an affinity for math and finding patterns, and that’s what led me to engineering. But no one ever suggested I look into computers or coding,” she said. “In the coding course in my first year of engineering, I realized, ‘Yeah—I’m good at this.’ Girls aren’t encouraged to look into this area but the boys in my class had been doing this since they were 12 or 13.”

She says the young programmers began to flourish in the course. Some of them programmed fairly elaborate games; others took on personal coding projects in their free time at home.

Krahn hopes to see the coding club members begin to share their knowledge with friends.

One idea DiscoverE is investigating is to have girls from the coding club set up Girls Coding Club branches at their own schools to teach their peers and learn together.

“I think they know best how each other thinks, so they can explain the concepts to their peers better than I can. I might use words or concepts they don’t know or things that don’t relate to them,” she said.

El-Daly says peer-to-peer teaching would be a real success for the program.

“We believe that kids are better able to reach their peers than we are,” he said. “They can take ownership of their education, and we will be there to support them and give them direction.”