Honorary degree recipient Elsie Yanik shares story of human generosity that has inspired her for 89 years. 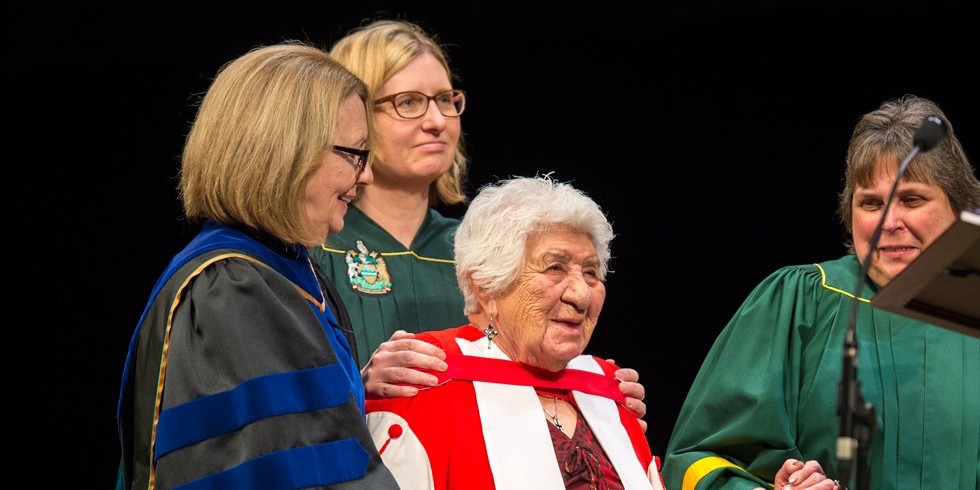 (Edmonton) A sack full of Christmas gifts delivered to a home in 1925 came wrapped in a message of human kindness that still remains with Métis elder Elsie Yanik.

At the time, Yanik was eight years old, caring for her younger siblings in their home in Fort Fitzgerald, Alta., and coping as best she could without the guidance of her sick mother, who had been taken to Edmonton for treatment, never to return.

Christmas was looking bleak that year, even with the help of neighbours who provided firewood and food to Yanik and her siblings. “It became apparent to all of us that Santa Claus had forgotten us.”

But the long-ago generosity of a local man, Syd Porter, left a feeling that warmed her heart once again, Yanik said as she received an honorary doctor of laws degree from the University of Alberta June 11.

“The way I felt then, 89 years ago, is how I feel today,” Yanik told an audience of graduates from the Faculty of Education.

Welcomed to her degree ceremony with an honour song sung to the beat of a drum by Lyle Tootoosis of Poundmaker, Sask., Yanik, 96, then shared a story from her childhood that has influenced her ever since.

“Kindness makes everyone feel good,” she said. “The person who gives kindness feels as good as the person receiving kindness. When we witness kindness it makes us feel very good. We all need to feel good as often as we can.”

Yanik has spent most of her long life spreading that belief through her own work, preserving Aboriginal heritage and promoting health and education in her community, the Regional Municipality of Wood Buffalo.

Since beginning work as a nurse’s aide in Fort Smith at age 17, she’s spent 80 years spreading her own kindness as a minister, mentor and volunteer. Her community commitment has included terms as president of the Voice of Native Women of Alberta Board, 10 years of service with the Young Offenders Board and work with the Nunee Health Authority in Fort Chipewyan.

Yanik’s tireless efforts have earned her a blessing from Pope John Paul II, a Governor General’s Commemorative Medal and the duty of Olympic torch-bearer as it passed through her community for the 2010 Winter Games.

Sharing her words of wisdom with grads, Yanik paid quiet homage to her friend Porter, a purser on a Hudson Bay Company steamer on the Slave River, a man who lived alone in a small cabin in the community, and “a true gentleman in every respect.” Whenever a need arose in the community, he was there to help, Yanik said.

“He did not wait to hear about it, he actively sought out opportunities to help. He was there for all of the children of Fort Fitzgerald, and probably anyone along the steamboat route of the river.”

Porter continued to serve as Santa for the community, including Yanik’s own children after she married, until he died in the 1950s. She remembers him fondly today as her mentor.

“He was my professor. Certainly not the only one, but probably the most important one. I am here today because he taught me the importance of kindness.”

Yanik expressed gratitude to the U of A for its own act of kindness in giving her an honorary degree, noting that in her long life, she thought she’d come close to paying back the generosity she has received, “but after what you have done here, I will have to live another 100 years before I can settle that account. Thank you very much.”