Fifty per cent of those with a significant (knee) injury will go on to develop osteoarthritis. 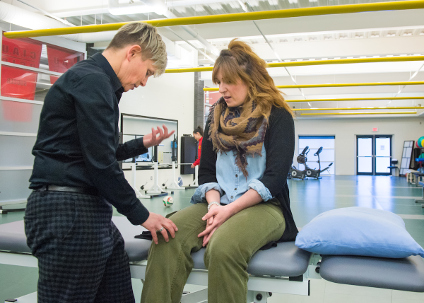 Giving teen athletes a leg up on beating osteoarthritis in adulthood 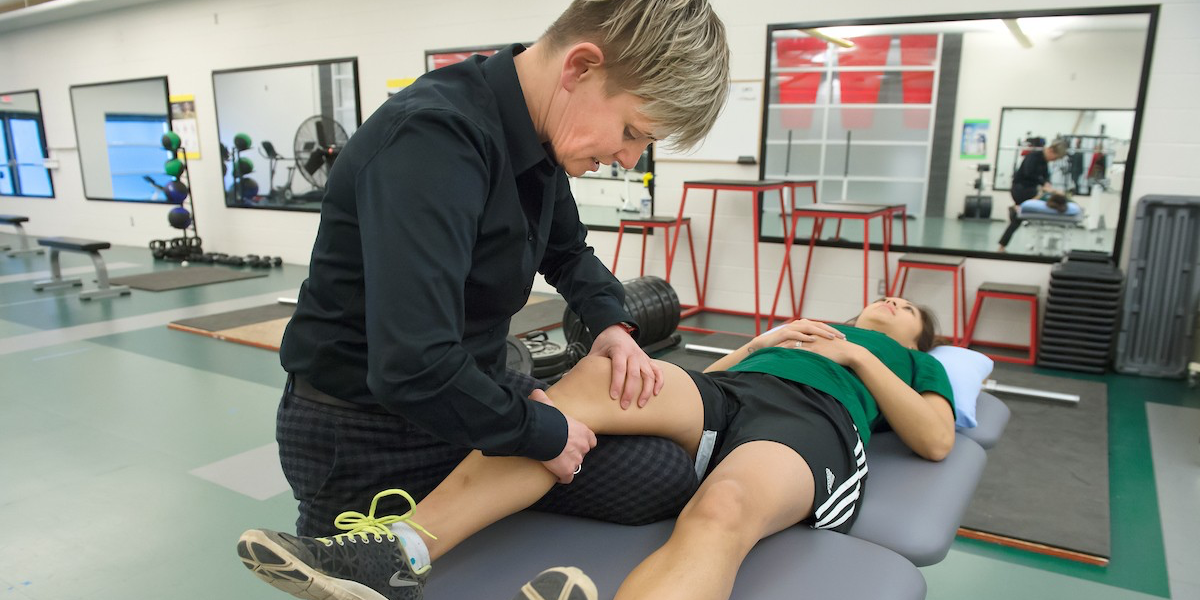 Jackie Whittaker works on a young athlete's knee. Whittaker is recruiting local youngsters with and without knee injuries for a study on how to prevent osteoarthritis later in life. (Photo: Richard Siemens)

Caley McElwain was in the dying moments of a soccer game when her leg tangled with another player. “She rotated and my knee was in there with her and it just popped. There was excruciating pain; I almost felt like throwing up,” she remembers.

That was 15 years ago, and it would take four more knee injuries—a mashup of torn ligaments and damaged cartilage—and four surgeries over seven years before she reluctantly hung up her cleats.

“My surgeon told me I’d need a knee replacement before age 40 if I didn’t quit.”

McElwain, a former University of Alberta Panda, high school and women’s league player, wishes she’d known way back then what she knows now about knee injuries and their lingering effects.

Her knee “is as weak as a granny” and at age 32, she has pain every day. She’s also at risk for developing osteoarthritis, a painful joint disease that causes knee cartilage degeneration. McElwain now relies on yoga, biking and strength training to stay active, and is vigilant about her nutrition and keeping a healthy weight because she can no longer burn off extra calories on the soccer pitch.

“I kept going back to playing soccer (between injuries) because I don‘t think I understood the impact it would have on me, and what was happening to my body.” Her eyes were opened only after studying for a physical education degree and a master’s in occupational therapy at the U of A.

“We are missing that piece of a 16- or 17-year-old truly understanding the lifelong impact of that injury.”

Preventing osteoarthritis from setting in

Researchers in the University of Alberta’s Faculty of Rehabilitation Medicine want to tackle that misery through a new project that is recruiting local youngsters with and without knee injuries, in a bid to prevent osteoarthritis from getting a toehold.

Lead researcher Jackie Whittaker wants to develop a screening program to identify young athletes at the highest risk of developing osteoarthritis after a knee injury, then figure out what can be done to reduce the risk and ensure lifelong activity.

“Many young athletes are only focused on returning to their sport and when they aren’t able to, we see a shift in their physical activity levels,” said Whittaker, a professor of physical therapy. “Education about the value of weight-bearing exercises, physical activity, good nutrition and improving knee confidence by using sport-related movements could help them avoid reinjury and cut that risk of osteoarthritis.”

Long-term consequences of knee injuries can be devastating, she added.

“In fact, 50 per cent of those with a significant injury will go on to develop osteoarthritis, which is an independent risk factor for death because it leads to inactivity, and that leads to other serious health problems.”

About 190,000 youths were medically treated for knee injuries in 2015 in Canada, Whittaker noted, with soccer, basketball and downhill skiing among the most common causes.

The U of A research project follows on the heels of a study Whittaker conducted with colleagues from the University of Calgary, which showed kids with sport-related knee injuries were heavier and less active, had lower quality of life and had less physical function three to 10 years after sustaining a sport-related knee injury.

“They were well on their way to developing osteoarthritis,” Whittaker said.

Supported by a grant from the Arthritis Society, she is looking at what happens to young athletes like McElwain during the first three years after the knee injury, in a bid to prevent inactivity and obesity—two major risk factors for osteoarthritis.

“We want to unwrap those first years and explore what happens during that time that leads to less function,” she said.

Working with young athletes, Whittaker will study their changes in body fat mass, physical activity, basic physical function (like the ability to hop or balance) and nutrition.

“These are things we think are going to hopefully tell us what is happening, and what we need to do so that people with these injuries don’t end up inactive and overweight years later.”

If only she had known then what she knows now

McElwain believes screening and education have to be a part of programming for youths involved in sports like soccer.

“It should just be a given that we are educated on injuries and why screening is important.”

She would have paid more attention to rehabilitation after her injuries, given herself more time to heal and realized sooner that there were other options for staying active.

“If I could go back and talk to young athletes, I would tell them how important it is to look at all these preventative things I wish I would have known about, because it would have led me down a different path,” she added.

The project is recruiting 100 youths aged 11 to 19 from the Edmonton area with sports-related knee injuries sustained in the last two months, along with 100 youths with no injuries. A similar study is running in Calgary. Those interested in learning more or volunteering for the study can contact kneestdy@ualberta.ca.