Giving the breath of life to infants 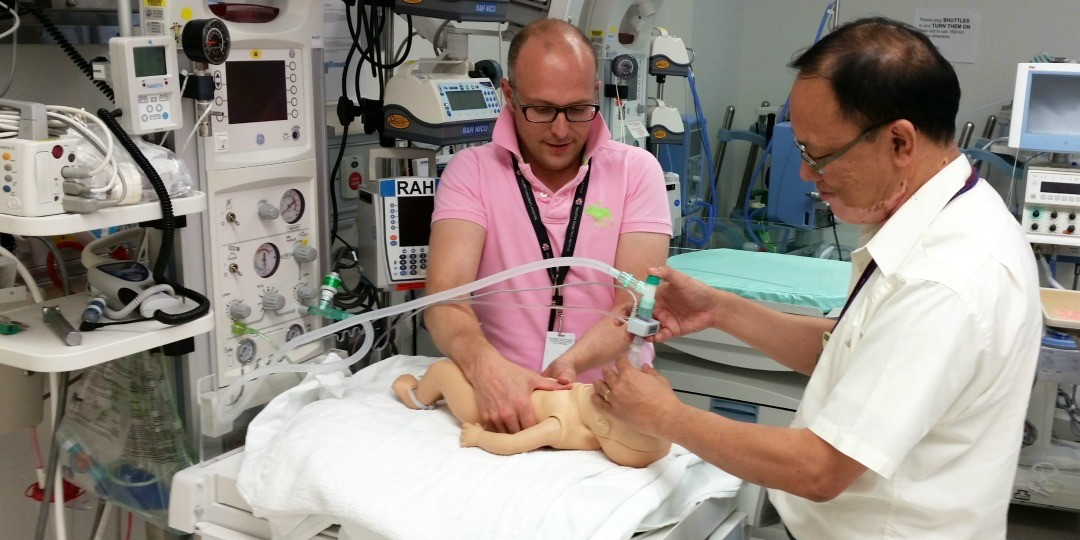 Georg Schmölzer (left) and Po-Yin Cheung demonstrate the method of infant resuscitation they are pioneering.

(Edmonton) For several Edmonton parents, the work being done by University of Alberta researchers Po-Yin Cheung and Georg Schmölzer could not be more meaningful. Cheung and Schmölzer’s efforts are focused on the resuscitation of newborn babies—and their latest findings, being tested in a clinical trial in Edmonton, have already helped save the lives of eight infants.

“The first time I saw it, I was excited,” says Schmölzer, an assistant professor in the Department of Pediatrics. “It was the greatest thing.”

The life-saving work has reimagined how to best resuscitate newborns just minutes after their birth. Every year, hundreds of thousands of babies around the globe die after resuscitation efforts fail. Finding a way to save them has become a top-10 research priority in Newborn Health of the World Health Organization. According to Cheung, a professor in the departments of pediatrics, pharmacology and surgery, a new resuscitation method he and Schmölzer have pioneered may offer a solution.

“In our highly translatable clinical model, the survival rate with this new method is close to 90 per cent, compared with a 35 per cent survival rate using the conventional model.”

Resuscitation is needed for about one in every 1,000 babies who are delivered at term, and more often at preterm. The standard method involves providing the ABCs (airway, breathing, circulation) to infants in steps. Health workers give the newborn three chest compressions followed by a rescue breath, and repeat as needed. In the new method being tested, Cheung and Schmölzer have neonatal hospital staff combine all the steps into one. Rather than timed rescue breaths, oxygen flows constantly into the baby’s lungs while health workers give continuous chest compressions until the baby's vital signs reach safe thresholds.

“The slower that you get the heart rate back, the more injury or damage occurs to the body—especially the brain—and the lower the chance that you get the baby resuscitated,” says Cheung. “In our test model, it shortened the resuscitation time by two-thirds.”

Schmölzer adds, “The feedback from the nurses afterwards was, ‘That was so much easier than what we normally do.’”

The current clinical trial taking place in Edmonton is studying the results of the technique on 20 babies. Once it ends, the U of A researchers plan to begin a larger clinical trial in centres across Canada and Europe. After that, if results continue to be positive, it would lead to a worldwide multicentre trial that could then lead to guidelines being changed around the world.

Both researchers plan to continue their work refining the new technique. Schmölzer’s efforts have also been given a recent boost, after he was given the Heart and Stroke Foundation/University of Alberta Professorship in Neonatal Resuscitation, an appointment that comes with a three-year operating grant of $100,000 a year to help support research.

“I’m really excited about it,” says Schmölzer. “The project we put forward is to investigate more about the new resuscitation technique. We continue to do lab research on it to identify the best methods.”

With the chance to make a difference in millions of lives around the world, Cheung and Schmölzer say they are ready to continue the work—providing infants and their families the gift of life.

Research funding was provided through Alberta Innovates – Health Solutions, the Canadian Institutes of Health Research and a Banting Postdoctoral Fellowship awarded to Schmölzer.

Giving the breath of life to infants