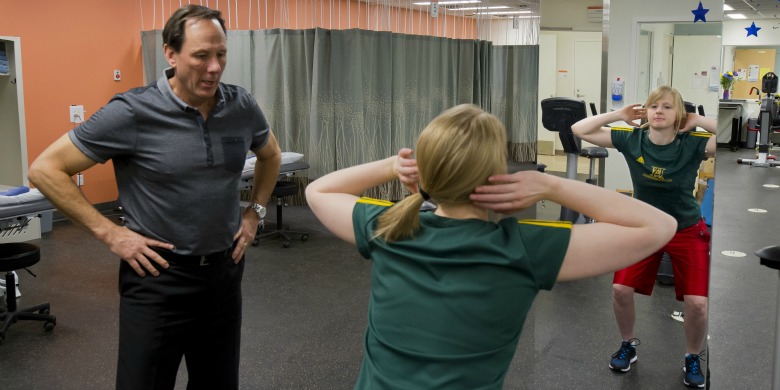 (Edmonton) A quarter century after first opening its doors, the University of Alberta’s Glen Sather Sports Medicine Clinic has a new home to advance patient care, teaching and research.

Now operating inside the newly opened Kaye Edmonton Clinic, the Glen Sather clinic has three times the space and a refreshed mandate to serve as an interdisciplinary centre of excellence in the diagnosis, treatment and rehabilitation of musculoskeletal, sport- and exercise-related injuries.

“When it first opened, the Glen Sather clinic pioneered the concept of multidisciplinary patient care in a way that revolutionized sports medicine, not only in Alberta, but nationwide,” said Bob Haennel, acting dean of the Faculty of Rehabilitation Medicine, which operates the clinic in partnership with the faculties of physical education and recreation, and medicine and dentistry.

“This new location gives us far more space and flexibility to advance that mission and serve as a hub of interdisciplinary excellence. This isn’t going to be defined by bricks and mortar—the Sather will be the focal point, but our services, teaching, learning and research will extend far beyond into other university facilities, into recreational areas and into the community.”

The concept for the Glen Sather clinic dates back more than 30 years to a time when physicians, physical therapists and trainers were more concerned about protecting their turf than co-operating, remembers founding director and orthopedic surgeon David Reid.

In those days, the only clinic space was a room in the back of the men’s locker room on campus, a fact that was particularly problematic once Reid started treating Pandas athletes in addition to Golden Bears.

“We used to put a towel over the ladies’ heads to walk them through the locker room to get their treatment—obviously, that wasn’t satisfactory,” said Reid, now a professor emeritus in the faculties of rehab medicine and medicine and dentistry. “[Former U of A president] Myer Horowitz was being treated at one point and he saw this and said, ‘What’s going on? We’ve got to do better than that.’”

Things did get better when a clinic was created inside the Clare Drake Arena; however, it was far from ideal. With fundraising help from the Edmonton Oilers and the Carnival of Champions—the precursor to the Edmonton Oilers Community Foundation—the Glen Sather Sports Medicine Clinic opened its doors in the fall of 1988, named after former Oilers president and general manager Glen Sather.

Kevin Lowe, current Oilers president of hockey operations, says he wouldn’t have been able to play some nights during his NHL career if it weren’t for the services of the Glen Sather clinic and outstanding physicians such as Reid and David Magee. Today, Oilers players have access to their own team facilities, but the link with Glen Sather is just as important as it was back then, he says.

“The Oilers and the Edmonton Oilers Community Foundation have really benefited over the decades through collaboration with the University of Alberta,” Lowe said, before unveiling a new mural in the clinic donated by the foundation. “We are so fortunate to have the University of Alberta in our city and a world-class facility like the Glen Sather clinic.”

The clinic has become a second home for Jaime Norum, a third-year psychology student and member of the Pandas basketball team. Norum was eight games into the basketball season in her freshman year when she tore her anterior cruciate ligament, an injury that required reconstructive surgery.

Seven months into her rehabilitation, while performing a simple jump, Norum again blew out her knee. One surgery and nearly 16 months later, she suffered another setback—the same knee and ACL but with a torn meniscus as well. After a third surgery, Norum is again rehabilitating with an eye to returning to the basketball court.

“I’m almost nine months post-surgery. I’m able to do a ton of stuff—cutting, shooting drills with the team,” said Norum, who says she’d be in a far different place without the Glen Sather and expertise from orthopedic surgeons David Otto and Reid, sports medicine physician Seana Minnett and physical therapist Ian Hallworth.

“All the doctors—Dr. Minnett journeyed with me, advocated for me, talking to surgeons about my ACL reconstruction—I’m very thankful for all the work she’s done,” she said. “Even my knee and the work with Ian, I would not be where I am at all today without the Glen Sather clinic.”

The new facility builds on its early foundations with a team of physicians, surgeons, physical therapists, orthotists and massage therapists. It also features a 3-D gait analysis system that’s the first of its kind in Edmonton to identify and treat walking, running and other musculoskeletal injuries.

The move to a new home coincided with a review of the Glen Sather clinic model and efforts to enhance teaching and research. The clinic has its first-ever academic director in Magee and a new education co-ordinator, both of whom are helping shape the Glen Sather into a beta site for teaching innovation across disciplines, Haennel said.

Through the work of faculty members such as Lauren Beaupre, Judy Chepeha and Linda Woodhouse, the David Magee Endowed Chair in Musculoskeletal Clinical Research, the Sather clinic will also serve as a research hub, leading to new treatments and improved health care for all Albertans, he added.

“This is an opportunity to take research from the lab and put it into a clinical environment—the next step back to everyday life for the patient. We will be able to see how well the therapies and interventions developed here apply to populations and can be rolled out into the broader community.”