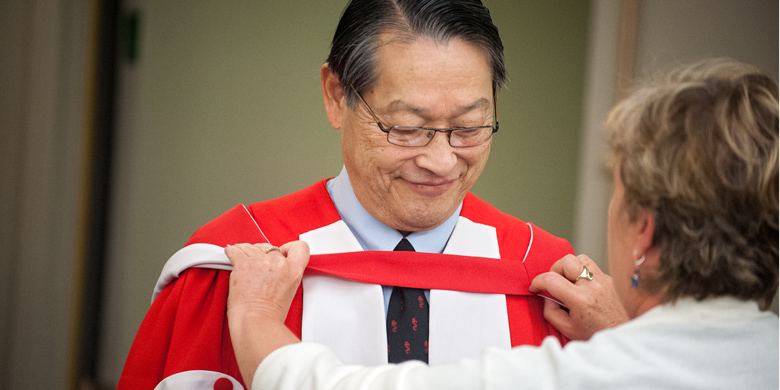 (Edmonton) A former World Health Organization special envoy and vice-president of the Rockefeller Foundation urged the University of Alberta’s newest medical and dental graduates to travel the world, be innovative and practise with a social passion.

Lincoln Chen, a doctor, policy advisor and academic who has helped to transform health care and development worldwide, spoke after receiving an honorary doctor of science degree during today’s convocation ceremony for the U of A’s Faculty of Medicine & Dentistry. In his address, Chen acknowledged the impressive progress the faculty has made over the past century.

“You graduates have been gifted with the best education, tested over a century of health achievements, to embark on a journey of a second century,” he told the class of 2013, whose celebration also marks the faculty’s centenary.

Chen said the medical school has contributed greatly to health in Canada, noting that Canadians’ average lifespan has doubled to 81 years over the last 100 years—three years longer than those living south of the border.

“And it continues to grow by two months every year,” he added. “This means that every year that we survive, we gain statistically an extra two months of life. Knowledge and its application are at the heart of these gains.”

Chen urged the graduating class to travel in, learn from and engage with our global village.

He recalled, as a young doctor in the 1970s, flying into an area in Bangladesh that had just been battered with 20-foot tidal waves, killing half a million people. Chen went to Manpura Island, which sits just two metres above sea level, to help care for survivors.

“We found a little spot of grass and began to pitch a pup tent. We were going to be doing relief work, when a high school student came by and said, ‘That’s not a very good place.’ We began to think, is he a smart aleck or trying to earn a little money? He then explained: ‘When high tide comes, you’ll be swimming in your tent!’”

Such is the kind of experience that may await graduates who engage with the global village, Chen said—but it was an instructive exposure.

“After seeing 20 patients, I stopped and became powerless. All of my Harvard training was powerless because I did not have all of the accompanying diagnostic, therapeutic and other paraphernalia I was accustomed to working with. And the diseases were entirely different from those I had been exposed to. To be effective, modern knowledge must be applied and suited to the local contexts.”

In a nod to his Canadian audience, Chen spoke of Norman Bethune, whose passion for the medical profession led him to China, and whose portrait hangs in the foyer of Shanghai Medical College. Bethune died there from an infection when he cut his finger during surgery on a wounded Chinese solider.

“He had been up all night consecutively and was exhausted from treating troops wounded during the Japanese war,” Chen said. “Mao Zedong coined and eulogized what he called the Bethune spirit—utter devotion to others without any thought of self.”

Chen said he cannot claim such martyrdom, but noted that similar passions led him to speak up after witnessing genocide in Bangladesh, to provide emergency relief after disasters and to run a pediatric clinic for malnourished children.

“These professional passions did not come to be automatically or easily. I’m not by nature a social agitator or activist. They came to me from travelling, from listening, from learning and from engaging in applying knowledge to solve problems in extraordinarily challenging social contexts,” he told the graduates.

“Global professionalism as part of global citizenship is not only smart, but also essential for you into the future.”