Industry Minister James Moore shines light on U of A space research. 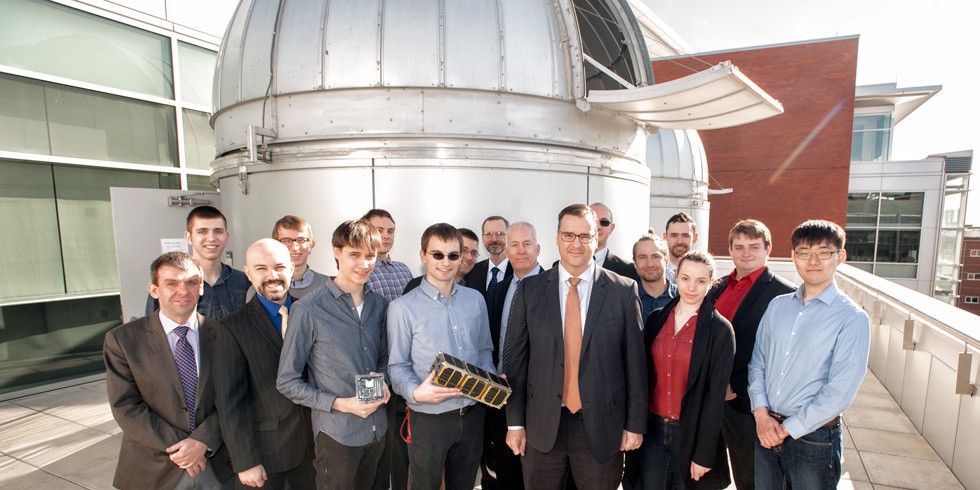 (Edmonton)  While highlighting Canada’s support for recent space research projects and initiatives, Industry Minister James Moore pointed to the University of Alberta’s work to build, launch and operate Alberta’s first satellite, as prime examples of the government’s collaboration with private and academic partners to support Canada’s role as a global leader in space exploration and research.

All systems are go for the launch next year of a satellite designed and built by the AlbertaSat student team at the University of Alberta. Ex­Alta1, the first satellite ever built in Alberta, will be part of QB50, a project mounted by the European Commission to simultaneously launch 50 cube satellites built by university students from 28 countries into the Earth’s lower thermosphere.

“This a very exciting project providing a unique hands­on experience to talented students from the University of Alberta,” said Industry Minister James Moore. “Projects such as the QB50 mission are the ideal vehicle for the promotion and awareness of space research to Canadian youth, and we eagerly support it.”

“With a long history of investing in space related research, the University of Alberta is perfectly positioned to lead the research and technology development needed to strengthen Canada’s space program,” said Vice President Research, Dr. Lorne Babiuk. “This is an excellent example of the contributions that our institution makes to advancing the national science and technology agenda.”

The satellite is designed and built by a team of some 60 undergraduate and graduate students, with support from research associates, technicians and academic experts at the U of A’s Institute for Space Science, Exploration and Technology (ISSET). The QB50 satellites are slated to launch in early 2016 from South America, but the AlbertaSat team must have their satellite and its control systems built, tested and shipped by this summer.

“The learning curve is very steep as far as how to do this—there’s not a lot of previous expertise [in Alberta],” said Charles Nokes, a fourth­year engineering physics student who is student lead on the project. “So there’s a challenge in learning and ensuring we have the knowledge and expertise in place to do the development, and the rest is procuring the systems we need and ensuring we have the resources we need to build and test everything.”

Ex­Alta 1 is a cube satellite made of three smaller modules that, together, are about the size of a loaf of bread and weigh only a few kilograms and will carry sophisticated equipment for gathering data about space weather and characteristics of re­entry.

“Our calculations are showing it will stay up six to nine months,” Nokes said. “It’s in low Earth orbit, so there’s still lingering atmosphere. And drag from that atmosphere means every one of those 50 satellites will burn up at some point. Hopefully we should be up and collecting data for nine months, which is a fairly significant amount of time."

Despite the tight timelines, U of A physics professor Ian Mann, who has been instrumental getting the AlbertaSat team onboard for the QB50 mission, said the current project is both incredibly exciting and just one small step toward a bold future for aerospace education, research and commercialization in Alberta.

“It’s pretty difficult to imagine a more energizing project to be involved in than to be building a piece of space hardware, then having the opportunity to launch and operate it in space,” Mann said. “We see this as a talent magnet to recruit some of the best students to the university to think about what opportunities they might have in the new technological future.”

The U of A has established broad scientific and engineering excellence in international space research. Projects include NASA’s Phoenix Mars Lander and the Canada­Norway Sounding Rocket exchange program (CaNoRock), a partnership with the University of Oslo and the Andøya Rocket Range in Norway. These projects give undergraduate students the opportunity to gain hands­on experience and academic credit designing sounding rockets and payload instruments.

Carlos Lange, professor of mechanical engineering and faculty supervisor for the AlbertaSat team, said the project demonstrates the potential for a made­in­Alberta aerospace industry.

“There is already a large, global economy based on the use of space resources, but this is just the very beginning of it. The Ex­Alta1 student­built satellite will not only pioneer a new industry in this province, but it is also the birth of a new generation of professionals trained at the U of A with specific skills required by this high­tech industry,” Lange said.

“This is one thing we have already started, we are doing it, and I think the province should recognize the economic potential. The time is now.”