Going small to save big 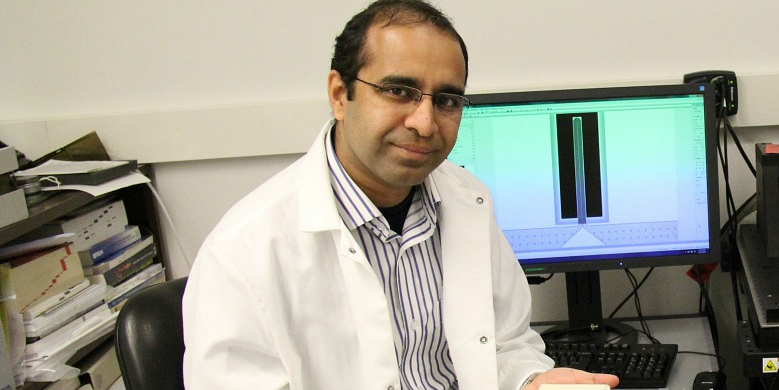 Faheem Khan holds the bimetallic microchannel cantilever, a sensor that can analyze liquids at a smaller volume than was previously possible.

(Edmonton) University of Alberta researchers have developed a micro sensor that can analyze chemicals using a smaller volume of liquid than previously possible.

Faheem Khan and Seonghwan Kim, who work in a research team headed up by Thomas Thundat, Canada Excellence Research Chair in Oil Sands Molecular Engineering, developed a sensor called a bimetallic microchannel cantilever, which can measure the physical and chemical properties of different liquids in volumes that are only a few trillionths of a litre. The device records heat generated by interaction with light with the liquid present inside a channel 25 times smaller than the width of a human hair. The sensor can also measure the weight of the liquid.

The sensor could become an essential tool for researchers working on lab-on-a-chip technology, which aims to bring different laboratory functions onto a single chip. It has many applications, such as:

The sensor would be customized for each of the possible applications. For example, in pharmaceuticals, the instrument would likely sit on a table indoors, whereas for the petroleum industry, it would need to be a handheld device capable of functioning in subzero temperatures.

“The next step is to do more tests, to collaborate with biology and chemistry researchers to see its potential for rapid cancer detection,” said Khan, who was lead author on the paper, published in the Royal Society of Chemistry journal Lab on a Chip. The U of A team is also collaborating with a team at the Technical University of Denmark headed by professor Anja Boisen.

“I’m also working on developing a startup company to market the bimetallic microchannel cantilever for commercial use,” Khan said, noting that the ability to measure molecular properties of liquids at such a small scale can save pharmaceutical, oil, biomaterial and other industries large amounts of expensive chemicals.

Going small to save big
Newsroom