Gold does it - again! 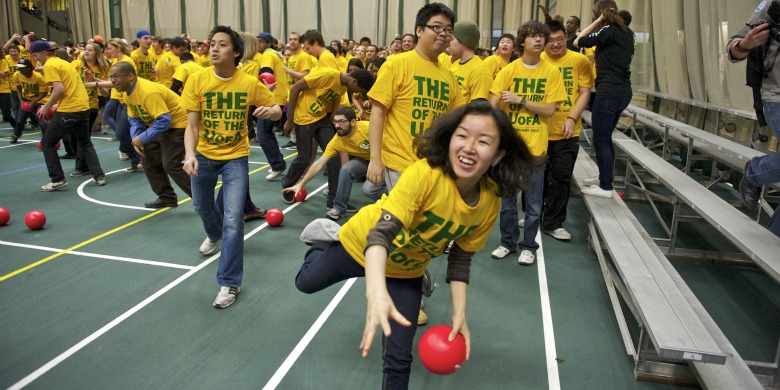 (Edmonton) The University of Alberta’s ownership of the Guinness dodgeball record has been much like a yoyo game—now you have it, now you don’t.  And so on Feb. 3, U of A students, staff and faculty were back at it for a third attempt to reclaim the Guinness World Record for the largest number of players in a game.

After more than an hour of pushing, running and throwing by players, the Guinness World Record adjudicator, Philip Robertson, who flew in from New York for the game, took to the stage.

“What can I say,” he says. “I’ve never seen so many people throw dodge balls against each other before. It was tremendous to watch, really good fun. The guidelines were all followed. And with that, I’m happy to announce that University of Alberta, Canada, has a new Guinness World Record.”

And they did it with more than 1,250 balls flying between 4,979 players, all of whom tried to dodge the red squishy balls for about an hour. At the end the last man standing was with the gold team. It’s the third time the gold team has won against the greens.

Dean of students Frank Robinson recounted the previous records. The first was set in 2010 with 1,198 players, and the next year with 2012. Robinson says each game has brought the university community closer together.

“This is a major lift for students, seeing more than a few thousand people cheering. I think it’s just one of those times when we can say, university is more than just a bunch of people going to classes. It’s definitely more than that,” Robinson says.

“It does not matter if it’s a dodgeball game or spelling bee, the point is if when you have that many people gaining a sense of community, you can’t help but feel good about it.”

The thunderous teasing roar between the teams before and during the game was evidence of the camaraderie. Among the crowd was second-year student Dani Yu, an international student from Hong Kong and a member of the winning gold team, who said the struggle for the record was the tie that binds.

“We were fighting for one goal, to get the record back,” Yu said. “This is not the same experience as going to class, this was fun.”

And it was the kind of event that Robinson says students need because they spend much of their time working hard in their studies and other responsibilities.

“This event is about taking time out to play hard and to provide students an opportunity to feel like they’re part of a larger community. The whole thing is not necessarily about breaking a record, it’s about getting people out there, to blow off steam and have some fun.”

Carl Amrhein, U of A provost and vice-president (academic), says it was a fantastic event and that the university stands ready to defend the record again. “It’s one of the events I look forward to every year. Whatever the number is next year, we will be here (to defend it).”

Gold does it - again!
Newsroom