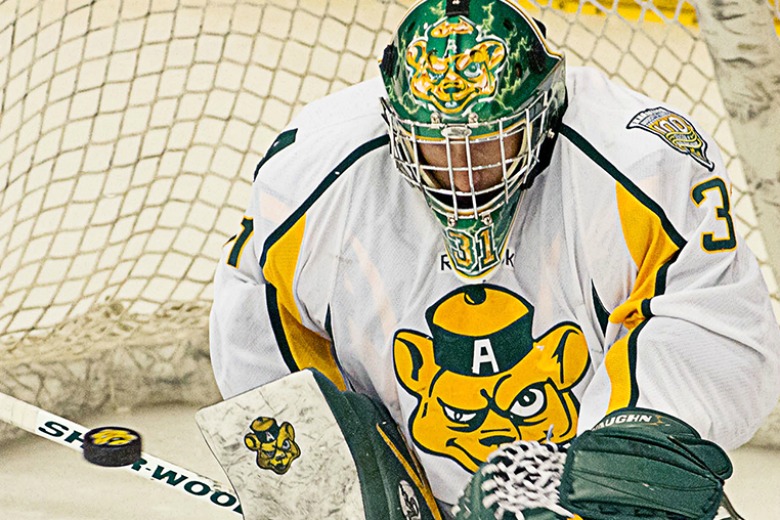 131212-kurtis-mucha-banner
Goalie Kurtis Mucha went from Golden Bear to Boston Bruin for a day when he suited up for a practice with the NHL team.

(Edmonton) University of Alberta Golden Bears goalie Kurtis Mucha traded one golden-hued bear logo for another when he suited up for the Boston Bruins during their practice in Edmonton Dec. 11.

The Bruins are in town for a game tonight against the Edmonton Oilers—with whom Mucha had a tryout in 2009—but were short a goalie for their practice when regular starter Tuukka Rask became ill. Michael Chan, a video coach with the Golden Bears who also helps the Oilers with video analysis, overheard the Bruins request for a goalie and put them in touch with Mucha.

The fourth-year goalie, who hails from Sherwood Park, was on the ice with the Bruins about an hour later.

“It was a lot of fun,” said Mucha. “It was really exciting to be out on NHL ice with NHL players like Zdeno Chara and David Krejci. “And, I did better than I thought I would do. I mean, I won’t lie, they sniped a few past me, but considering I hadn’t skated since the end of November, I fared pretty well. My adrenalin was very high and I think that helped me out.

“The whole team was great to me and it was just a great experience,” Mucha added. “On the ice and in the dressing room, they treated me very well. Their captain, Zdeno Chara, went out of his way to shake my hand and thank me a few times, and the team got me four signed sticks, a signed hat and tickets to the game. It was a great experience, and I’m really grateful to the Boston Bruins for how they treated me.”

During the practice, the Boston Bruins tweeted photos of Mucha leaving the ice in a Bruins jersey and skating with the Bruins.

It’s just another memorable moment in a great career for Mucha in Canadian Interuniversity Sport. Last season he was awarded the CIS goaltender of the year award, he became the first goaltender in Canada West history to be credited with a goal, and he set a CIS record by notching five consecutive shutouts. In fact, Mucha’s shutout streak (335 minutes and six seconds) is the longest in modern-day play for CIS, the WHL and the NHL. Though it falls short of the NCAA record of 375:01, Mucha’s feat is longer than the modern-day NHL record of 332:01 set in 2003-04 by Brian Boucher of Phoenix.