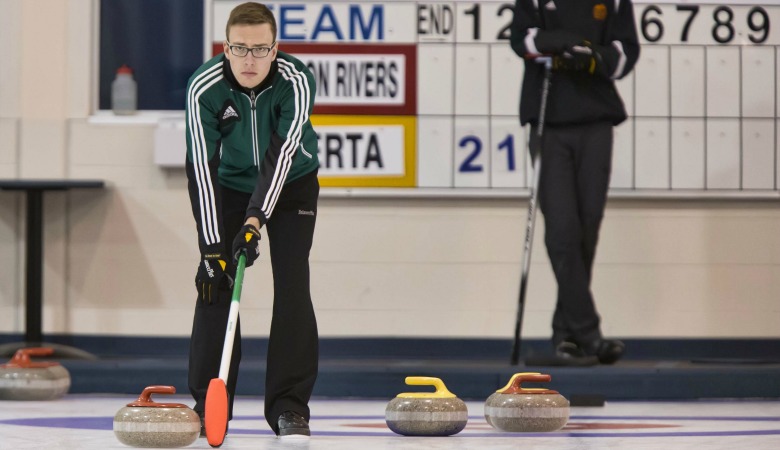 Third-year University of Alberta Golden Bears curling skipper Brendan Bottcher has been named Canada’s flag bearer for the opening ceremonies of the 2013 Winter Universiade, which begins this week in Trentino, Italy.

Bottcher, an engineering student at the U of A, was announced as Canada’s flag bearer at an event officially welcoming Canada’s delegation to Italy, hosted by Canadian Embassy members, Canada’s Chef de Mission of the games and a number of Italian government officials.

“It’s a pretty big deal for me. You always see the flag bearer as the leader of the team, and this is the first competition I’ve been at where the team is so large,” Bottcher said. “I’ve played at world championships, national championships where your team is quite small and here I’m representing a much larger group. I’m really proud to be doing that for Canada at these Games.

Bottcher is among five curlers and five Augustana biathletes—along with a host of Golden Bears, Pandas and Augustana coaches—who are headed to Trentino to be part of the 26th Winter Universiade Games.

Rob Krepps, who leads the U of A curling program out of the Saville Community Sports Centre, will serve as Canada’s men’s head coach. Garry Coderre, head coach of the U of A Pandas, will be the Canadian women’s head coach. Canada’s men’s team in Italy will be composed of Brendan Bottcher and Brad Thiessen, both of whom still curl for the Golden Bears, as well as Bears alumni Karrick Martin and Mick Lizemore. Parker Konschuh, who still competes at the U of A, will be the team’s alternate. This team captured the CIS championship in 2012.

And although Canada’s women’s team is the former two-time CIS championship team from Sir Wilfrid Laurier University, that whole rink, once graduated, moved to Edmonton to train at the Saville Community Sports Centre under the guidance of Krepps. The team will be skipped by Laura Crocker, and features Jennifer Gates, Sarah Wilkes and Cheryl Kreviazuk, along with former Manitoba Bison skip Breanne Meakin as the team’s alternate.

The curling coaching contingent will be joined by Pandas hockey bench boss and seven-time national champion Howie Draper, who will take the helm of the women’s hockey team, and Augustana biathlon coach Lowell Niven.

The opening ceremony of the 26th winter world university games is set for Wednesday evening at Piazza Duomo in the capital of the Northern Italy province and will be streamed live on www.fisu.tv starting at 10 a.m. MST.

Over 2,800 participants from 52 countries, including a record 149 Canadians (107 athletes), are attending the biennial multi-sport competition, which runs until Dec. 21.