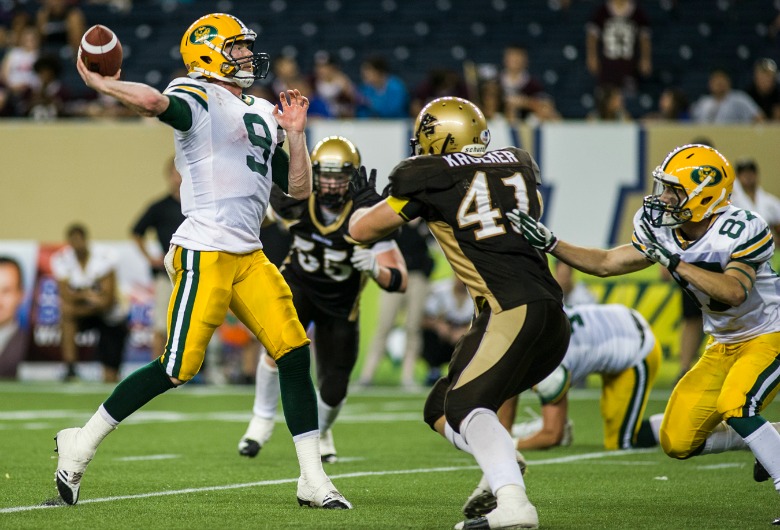 (Edmonton) This Saturday, Sept. 7, will be the first time football fans throughout Edmonton and northern Alberta will be able to see the rebuilding efforts head coach Chris Morris has taken with the University of Alberta Golden Bears as they take on the UBC Thunderbirds at 5 p.m. at Foote Field.

Both the Bears and Birds are searching for their first win of the season after Alberta dropped a 65–41 loss on the road to the Manitoba Bisons, in what was the third-highest scoring game in Canada West history, and UBC lost 41–31 against Calgary in Vancouver.

In their first game under Morris, who took over the program in January of this year, the Golden Bears recorded an impressive 618 net yards of offence and scored more than 40 points for the first time in three seasons. Newly anointed starting quarterback Ryan Schwartz guided Alberta’s rebuilt offence by running more than 90 plays, which resulted in him tossing for 352 yards and four touchdowns while rushing for another 150 yards and one TD. Also leading the way was freshman running back Ed Ilnicki, who ran for 103 yards in his Canadian Interuniversity Sport debut, while another rookie, tailback Aundrey Webster, caught three passes for 56 yards and a pair of touchdowns in his first-ever CIS game.

As impressive as the young guns were for the Bears, there are corrections to make before they tangle with the T-Birds this Saturday in front of the Foote Field faithful. Manitoba’s offence, arguably the best in the Canada West conference, racked up huge yards against Alberta via the running game, and was able to score back-breaking touchdowns seemingly at will. Alberta gave up 21 points in a two-minute span late in the second quarter that effectively won the game for the Bisons.

Key to stopping the UBC running game will be Alberta’s veteran front seven. Defensive linemen Greg Severin and Steven Giang, and linebackers Tyler Greenslade and Connor Ralph, are among the key players in a strong group. New starters Troy Weissbach (DL) and Tom Tsoumpas (LB) are factors as well.

Up front, the blossoming chemistry between Schwartz and former CJFL player Tylor Henry should lead to even more production this week after the two hooked up on nine passes for 103 yards in week one. Veteran receiver Ryley Richardson, one of the few holdovers in the receiving corps, had four catches for 35 yards in game one, while freshmen Tak Landry and Adam Zajdel each caught TD passes in their first career CIS games. Fifth-year slotback and return man Jess Valleau could also contribute, but is currently trying to return from injury.

The rebuilt offensive line, which features new arrivals David Beard, Lincoln Untereiner and Scott Ledieu, as well as Eric Permann, will have to overcome the loss of Reid Bowman, who left the game against Manitoba late in the fourth quarter with a broken leg. The group did a solid job protecting Schwartz in their first game together as a unit, giving up just two sacks against on 90 plays, while also making room for the Alberta running game to collect 272 yards. Veteran Smith Wright, a recent Edmonton Eskimos draft pick, also plays a key role in protection and short-yardage situations.

There are plenty of storylines along the sidelines as well. Morris and the majority of his staff are making their Foote Field debut, and Golden Bears offensive line coach Tim Prinsen and offensive co-ordinator Rick Walters are returning to the Foote sidelines for the first time since 2009 for Prinsen, and 2006 for Walters. UBC’s coaching staff features former Golden Bears head coach Jerry Friesen as the defensive co-ordinator, as well as former Alberta coach Frantz Clarkson (DBs) and former Bears player Jamie Stoddard. On top of that, UBC head coach Shawn Olson was Ryan Schwartz’s offensive co-ordinator when the pair were with the Simon Fraser University Clan in 2010.

Free admission for U of A students

Tickets for the Golden Bears football home opener are available through the Activity Registration Zone at 780-492-2327 or online through Ticketmaster. Saturday’s match is a Legacy Game, which means admission is free for all U of A students.