Kurtis Mucha will serve as back-up for the Edmonton Oilers. 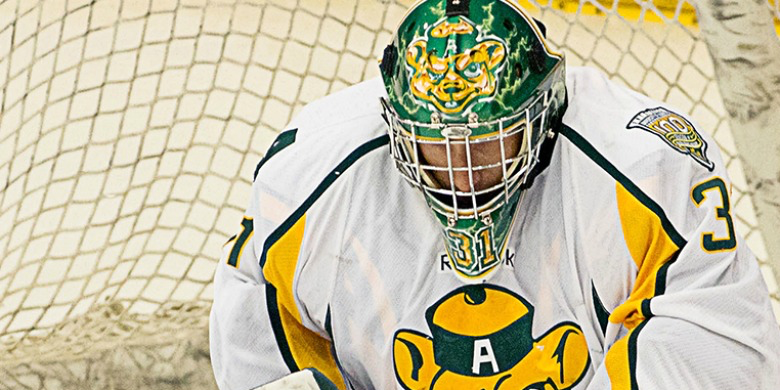 (Edmonton) Fourth-year University of Alberta Golden Bears hockey goalie Kurtis Mucha will suit up as the back-up goaltender for the Edmonton Oilers when they take on the Ottawa Senators Tuesday, March 3 at Rexall Place.

Mucha, who hails from Sherwood Park, is doing his second tour of duty with an NHL team, after filling in for the Boston Bruins during their practice in Edmonton earlier this year.

The 2013 CIS Goaltender of the Year has had another strong season between the pipes for the top-ranked team in the nation. He was named a Canada West Second Team All-Star on Tuesday after a regular season in which he recorded a 14-1-1 record, as well as the second-best goals-against average (1.87) in the country. He also recorded three shutouts and a .909 save percentage this season.

Mucha and the Golden Bears are in the hunt for the Canada West conference title this weekend when they host the Calgary Dinos in a best-of-three series beginning Friday night at 7 p.m. in Clare Drake Arena. Only the Canada West championship team will advance to the CIS national championship tournament, which begins March 20 in Saskatoon.

Last season was also memorable for Mucha. He was awarded the CIS Goaltender of the Year award, became the first goaltender in Canada West history to be credited with a goal, and set a CIS record for consecutive shutouts with five. In fact, Mucha’s shutout streak of 335 minutes and six seconds is the longest in modern-day play for the CIS, the WHL and the NHL.