We knew we were just not going to come in [and repeat]. We knew we had to go out and earn it.

Golden Bears hockey does it again 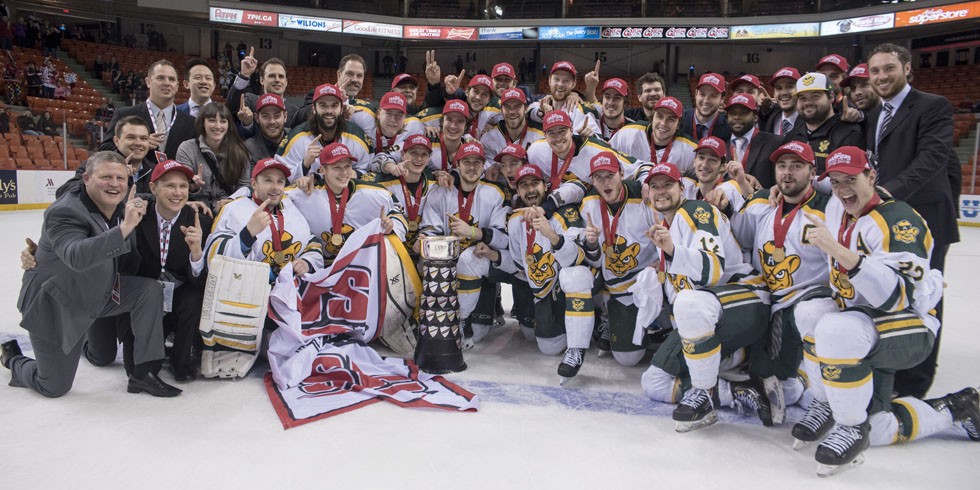 The 2014-15 Golden Bears won the program's 15th University Cup March 15 in Halifax by beating the University of New Brunswick 6-3.

“We knew we were just not going to come in [and repeat]. We knew we had to go out and earn it,” said Ian Herbers, Golden Bears head coach, of the win that saw six different Golden Bears players find the back of the net. “We haven’t relied on one line all year long or one set of defensemen; that’s just the character of our room—the work ethic, the leadership.”

In a battle of the top-two ranked men’s university hockey teams in Canada, Stephane Legault gave the No. 1 Golden Bears a 1-0 advantage at 2:09 of the opening period on his team’s first shot of the game.

Off the rush, he took a cross-ice pass and beat Varsity Red goaltender David Shantz with a wrist shot. Jamie Crooks and Brett Ferguson collected the helpers.

Midway through the period, with UNB a man short, Alberta doubled their lead to 2-0. With the help of a screen from Ferguson, Golden Bear forward Jordan Hickmott took a pass from Canada West player of the year T.J. Foster and beat Shantz five-hole on only the third shot of the game for Alberta.

UNB sliced the lead in half early in the second period when Dylan Willick beat Golden Bears netminder Curtis Mucha from in tight.

The Golden Bears, who only gave up three shots in the opening frame, then killed off back-to-back power plays at what was a critical point in the game.

With less than four seconds remaining in the second period, the Golden Bears increased their lead to 3-1 and silenced the pro-UNB crowd on a marker by Johnny Lazo. Levko Roper made a spinning feed from the boards to the front of the net, which Lazo put top shelf over Shantz’s right shoulder.

The Golden Bears swarmed the UNB net to start the third period looking to put a dagger in the Varsity Reds season, firing six shots on Shants in the first six minutes.

However, it was Atlantic University Sport MVP Philippe Maillet who would strike next, cutting the Golden Bears lead to 3-2.

Then, with UNB serving a too-many-men on the ice penalty, the Golden Bears regained their two-goal lead when Reddick took a Thomas Carr feed and scored from the slot through a maze of bodies. Jordan Rowley collected the other assist.

UNB would not go away so easily, however, as they pulled within one, with more than four minutes left on the clock and headed to yet another power play.

With the Varsity Reds looking for the tie, the Golden Bears penalty killers forced a turnover at centre and took off the other way, with Ferguson feeding Koper on a two-on-one, who beat Shantz to make it 5-3.

With 1:49 remaining, Rowley gave the Golden Bears a 6-3 advantage with an unassisted empty-net tally.

“We have a great group of young men, and I am very proud of them,” said Herbers. “They have had an extremely good year—pulling together and finding ways to win.”

All told, the Golden Bears would outshoot UNB 24-9 in capturing the program’s 15th national title, a CIS record.