Golden Bears to face off against Oiler rookies 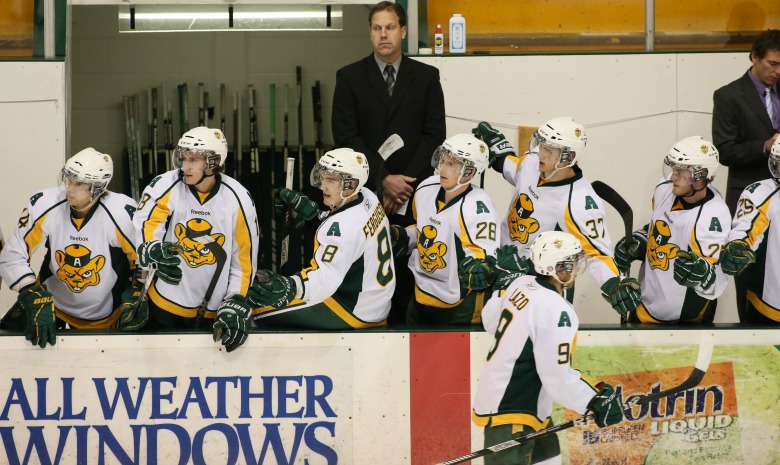 130809-ian-herbers-on-bears-bench-banner
Golden Bears hockey coach Ian Herbers, who played for the Edmonton Oilers, will lead his squad as they take on the Oilers rookies Sept. 10.

(Edmonton) Clare Drake Arena will once again host the University of Alberta Golden Bears versus the Edmonton Oilers rookies hockey game. The 2013 edition is being held Tuesday, Sept. 10, with a puck drop of 7 p.m.

The Bears versus Oilers rookies game began in 1988 and was a yearly tradition for more than 20 years. The teams last met in 2009 when the Bears skated to a 4-3 victory, which bumped their record against the Oilers rookies to 12-10. Current Golden Bear centre Sean Ringrose scored the game winner in ’09 and is one of five Bears to have played in an Oilers rookies game, along with defencemen Colin Joe and Ian Barteaux, forward Burke Gallimore and goalie Kurtis Mucha.

“It is definitely one of the biggest games of the year, and one of the most enjoyable games we’ll get to play in,” said Ringrose. “We’re very excited to have this game back. It is such a great experience for all the players and the fans; the arena is packed, there is a lot of hype, an amazing atmosphere; and it’s always a really good and tight game.

“This series has a lot of history, and I know what a great experience it is to play against some of the Oilers players. This isn’t any exhibition or preseason game; playing against the Oilers organization is something special, and it will be a really good way for us to kick off our season.”

The two programs have split the last four contests evenly, but before that the Bears had racked up five straight wins. Current Oilers who have played in the game include Jordan Eberle (’08 and ’09), Sam Gagner (’07) and Devan Dubnyk (’05, ’06, and ’07).

"We are very pleased to once again partner with the University of Alberta and to play the Oilers Rookies–Golden Bears game,” stated Oilers general manager Craig MacTavish. “The contest carries a great tradition and it is an excellent way for both the Oilers and Golden Bears to showcase young talent, as well as create a high level of competition for the players."

Although the game hasn’t been played in recent years, the Oilers and Golden Bears have continued a working relationship, as shown by the presence of MacTavish and Oilers centre Ryan Nugent-Hopkins at the 2012 Golden Bears hockey dinner, which celebrated the program’s 100th competitive season. On top of that, current Golden Bears Ben Lindemulder, Barron Smith and Brett Ferguson have been to Oilers camps, and recent Bears alumni Eric Hunter and Jesse Gimblett have played in the Oilers’ pro development system. The ties between the two programs go even deeper: current Bears bench boss Ian Herbers played for the Oilers, and the Oilers' senior director of player development, Rick Carriere, is an alumnus of the Bears program.

“The Golden Bears and U of A Athletics would like to thank the Edmonton Oilers organization—in particular, general manager Craig MacTavish—for renewing and re-energizing the long-term relationship that has existed between the Edmonton Oilers and the University of Alberta Golden Bears,” said Stan Marple, general manager of the Golden Bears. “This game is very important to our program as it exposes our team to the highest level of competition, and it raises significant publicity and revenue, which keeps us competitive in Canadian Interuniversity Sport. We are very grateful and fortunate that the Oilers’ and Craig's commitment and understanding of the greater hockey community in Edmonton has brought this game back.”

Tickets are $30 and are available at the Activity Registration Zone sales office (780-492-2327) in the Van Vliet Centre, as well as at all Ticketmaster locations and online through ticketmaster.ca.

Golden Bears to face off against Oiler rookies
Newsroom