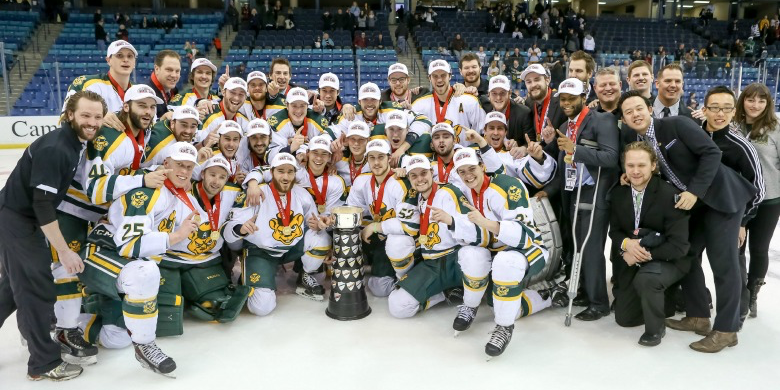 (Edmonton) The University of Alberta Golden Bears hockey team has become one of the most successful teams in the City of Champions’ rich sporting history, thanks to a record 14th national championship win.

The Golden Bears sealed the championship with a 3-1 win over the University of Saskatchewan March 23 at Credit Union Centre in Saskatoon.

Edmonton has been home to some of the greatest teams in sporting history, and the Golden Bears have now carved their place in that history, joining the legendary ranks of the Edmonton Grads, the Edmonton Eskimos and the Edmonton Oilers.

Clare Drake, after whom Alberta’s home arena is named, is the backbone of that success, having won six of those national championships as the Bears head coach and recording 697 wins, which still stands as a Canadian university record, against 296 losses and 37 ties, for a .695 winning percentage. Above all else, however, Drake’s most important contribution was the Golden Bears hockey template that he bequeathed to the program, and to anyone who asked, that continues to foster success at all levels of hockey to this day.

The Edmonton Grads women’s basketball program holds the North American record for the sports team with the best winning percentage of all time, having racked up 502 wins and 20 losses between 1915 and 1940 for a staggering winning percentage of .961. Although the Grads disbanded in 1940 at the outbreak of the Second World War, the pages of their history books are rife with success stories, including a 27-0 record in the Olympics*, as well as a combined 108 local, provincial, national and international titles. The Grads were the undisputed world champions for 17 consecutive years.

The Edmonton Eskimos, of the Canadian Football League, have 13 championships to their credit, second most in CFL history. The Eskimos still own the North American professional sports record for consecutive appearances in the playoffs, with 34, which they achieved between 1972 and 2005.

*Women's basketball was not an official Olympic sport when the Edmonton Grads competed.