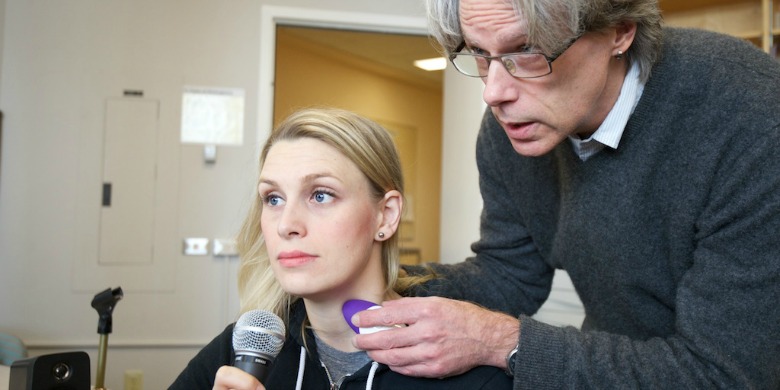 (Edmonton) David Ley is on the phone from Stratford, Ont., where he’s been holding vibrators—yes, the sex toy variety—against the throats of some of the finest actors in the country to give them more vocal power.

The University of Alberta voice and dialect coach admits it’s a bizarre technique sure to raise eyebrows, but it works “like magic,” he says. Without exception, everyone who has tried Ley’s recent innovation has reported improved projection and range.

“I’ve done this with singers, schoolteachers and actors. It always works … some people simply say, ‘wow!’”

The idea is so simple that you might well ask why no one has thought of it before. One common therapy used in speech pathology involves massaging the larynx to loosen up tension, “but some people just can’t handle that—the feeling of fingers on their throat,” says Ley.

So in trying to come up with a solution for an actor who was losing her voice, he began casting about for a different approach. It struck him that drugstores sell vibrating devices to help release various forms of muscular tension, and that had him thinking, “Where can you go buy small hand-held vibrators?”

It hit him like a hot flash—the local love shop, of course.

Ley then took his idea to a friend in speech pathology to explore its potential for helping relieve more serious cases of vocal stress.

“This is the great thing I’ve found about the university. I’ve gone with what I’ve considered to be pretty wacky ideas to people in other departments and they say, ‘That sounds odd, but I’m willing to go with you on this.’”

Toronto actor Sara Farb was suffering from laryngitis in a recent Citadel production of Next to Normal—a high-octane, vocally demanding rock-and-roll musical—when she heard about Ley’s discovery.

“It was just unbelievable,” she said after meeting with him once to try out the therapy. “That night was my best performance—not just of that run, but in recent memory. It was like my voice had been polished and was completely brand new. It was so absent of stress, even though the show was a stressful one to do.

“I sent David a message that night saying he may have changed my life. I don’t mean to be dramatic, but it was drastic. I will never forget that performance.”

Ley says it’s still early days for concrete scientific evidence, but he plans to publish the promising preliminary results soon. To begin disseminating his method he’ll present at the Voice Foundation Symposium in Philadelphia early next June. He’s also taken the idea to TEC Edmonton to begin the patenting process.