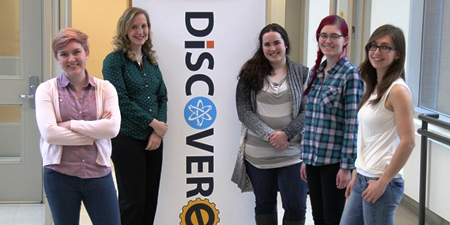 (Edmonton) An outreach program from the University of Alberta’s Faculty of Engineering has won a world-leading third Google RISE award for innovation and community impact.

The award was presented to the DiscoverE outreach team in support of its plans to expand programs empowering girls to use computer technology.

DiscoverE was the first Canadian organization to win the RISE (Roots in Science and Engineering) award and is the only group to win it more than once. The RISE awards support organizations that engage girls and underrepresented students in extracurricular computer science programs.

DiscoverE won its first RISE award in 2013 to create its Girls Coding Club and to bring engineering, science and technology programs to a remote First Nations community in northern Alberta.

It won the award a second time in 2014 to take the Girls Coding Club to the next level—producing a MOOC about computer programming by girls, for girls, and to encourage girls to form Girls Coding Clubs at their own schools, teaching their peers about coding.

This year, DiscoverE will use the $25,000 award to create a second MOOC, introducing students to Java and enabling them to program their own Android apps. They’ll also bring coding programs into schools and communities at a local, regional and international level, “supporting schools around the world as they create their own coding clubs,” says DiscoverE director Alyssa Boyle.

Boyle says it’s impossible to pinpoint one specific reason DiscoverE has been singled out for the award three times but says that Google is “thrilled” with the program’s bold and confident approach to outreach, especially with respect to computer science.

“When we first came up with the idea to teach children as young as Grade 3 coding languages like Python and Java, a few people laughed in our faces,” Boyle said. “But we weren’t afraid to try, because we believe the youth of our generation are so tech-savvy already that it isn’t much of a step to teach them to become producers of this technology rather than just users.

“We believe in challenging ourselves and our students, and so far we haven’t been disappointed,” she added.

Boyle stresses that the whole idea behind the Girls Coding Club and the MOOCs is to empower the next generation.

“The everyday technology in our lives has so much more power than what we use it for, and if we teach these kids how to ‘break the system’ they can harness that power and be able to do what they want.

“By the end of the term they will not only know how to use Python and Java, and how to build an app—they will have 21st-century skills that are probably going to be necessary, and we want them to have the attitude that they can create whatever they want—and that’s empowerment.”