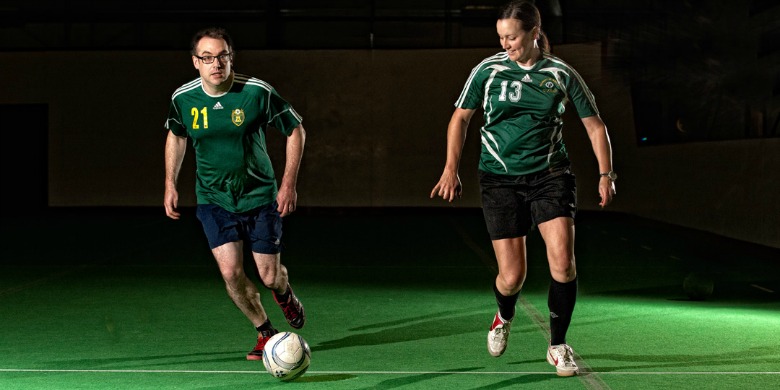 (Edmonton) Make no mistake, Alex Clark and Lionel Messi were not separated at birth.

Both might be stars in their own right, but Clark, associate dean of research in the Faculty of Nursing at the University of Alberta, realizes he’s not about to woo stadiums of crazed soccer fans like FC Barcelona’s all-time top scorer.

“It would probably take you about five seconds of watching Lionel Messi move the ball to work out who is the more talented soccer player; however, a lot of health research would see us as very similar,” says Clark, noting they’re both male, under 5-foot-11, have brown hair and are top performers in their fields.

“From a health perspective, the current approaches we are using to look at complex interventions would not be able to pick up the difference between Alex Clark and Lionel Messi.”

And therein lies the problem, adds Clark, who used the soccer analogy in a new paper published Dec. 17 in the British Medical Journal. The paper was co-written by nursing peer—and fellow soccer fan—Lorraine Thirsk and researchers from the George Institute for Global Health in Sydney, Australia.

Learning from the “Messi intangibles”

Though the analogy is intentionally absurd, Clark says the lessons to be learned from soccer are real—and can help save lives. Whereas health research focuses on what is readily quantifiable, soccer fans and announcers appreciate the complexities that make Messi the player he is, and a host of other intangibles during a match—from field conditions to injuries to opponents to coaching and managing.

“Our health research needs to tap into these ‘Messi intangibles’ when we are evaluating treatments and interventions. A simplistic trial is not going to do that,” Clark says. “That’s why you end up with some studies that say a program is successful and some studies that don’t. And decades of research is published like that, with contrary findings and no understanding of why.”

Thirsk says many of the questions health researchers ask are the soccer equivalent of asking, “Does Messi score goals?” or “Does Manchester United win?” Researchers can try to evaluate whether a diabetes self-care management program works, but it doesn’t explain other factors such as differences in population, individual behaviour, education and other intangibles.

“Those are factors that are much more difficult to count and observe,” she says. “What we should be asking is what works for whom, when and why.”

Researchers also need to learn from failure, Thirsk and Clark say. When Messi has a bad day on the pitch, fans and announcers are keen to ask why. “In health-care research, negative findings either don’t get published or are spun into positive findings,” Clark says.

“Sports fans love failure because failure gives you a really concerted effort to work out, ‘Why are we not winning? What on earth is going on?’ In health, we see denial, methodological changes to hide failure or just spinning,” adds Clark, noting research shows 40 per cent of studies have negative findings that are spun into positives because of a scientific culture that looks down on failure.

“That raises deep questions about our scientific culture. We need to embrace those hard questions and reflections to learn from failure and create research that is of higher quality, is more useful and is more likely to benefit people in Canada and elsewhere in the world.”