Governments celebrate completion of $82.8-million infrastructure projects for U of A; federal government announces $39 million in new research funding 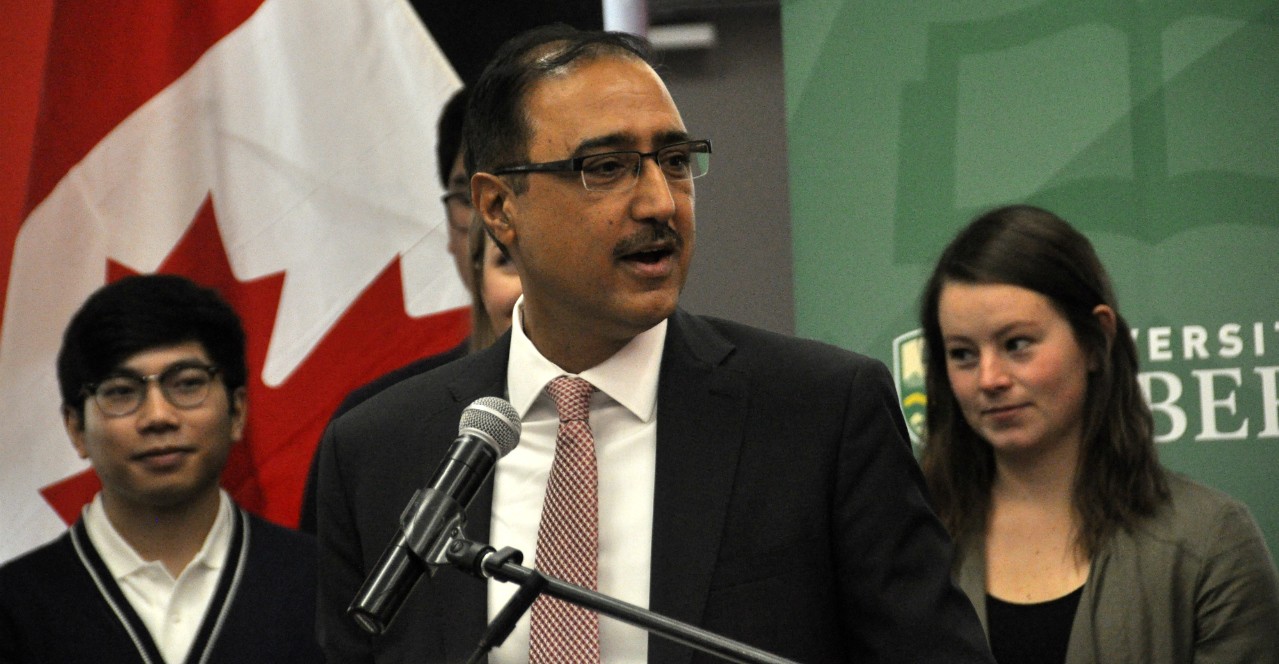 Amarjeet Sohi, federal minister of natural resources, announces $39 million in discovery grants from the Natural Sciences and Engineering Research Council to support fundamental research at the U of A. The announcement came at an event this morning marking the completion of 10 U of A research infrastructure projects announced in 2016. (Photo: Jordan Cook)

In the early morning of May 26, 2017, Ex-Alta 1, a small cube satellite designed and built by University of Alberta students, was deployed from the International Space Station.

And while that satellite set straight to work measuring lower thermosphere and space weather—powerful bursts of solar wind that represent a threat to trillions of dollars worth of earthly electrical power and communications infrastructure—back at home work was well underway on an ecosystem to help the Ex-Alta 1 crew get started on a their second race to space.

The Student Innovation Centre in the Centennial Centre for Interdisciplinary Science was one of 10 U of A infrastructure projects announced back in September 2016 that are now up and running thanks to an $82.8-million investment from the Post-Secondary Institutions Strategic Investment Fund. The funding included $56.3 million from the Government of Canada and $26.5 million from the Government of Alberta.

U of A president David Turpin, who was on hand to celebrate the completion of the projects, said that particular space is already “helping students build on their ideas, laying the groundwork to turn these ideas into businesses, evidence-based policy, cleaner energy practices and healthier communities.”

“These critical investments from the provincial and federal governments advance science and discovery at the University of Alberta, in our city and province, and across Canada,” he said. “These investments enable remarkable students and researchers at different stages of their careers to take innovative risks and tackle pressing challenges to build a better future for everyone.”

Schmidt talked of how Campus Saint-Jean’s biology labs, which underwent an extensive upgrade thanks to the infrastructure investment, predated the discovery of DNA in 1953.

“That’s how important it is to make these investments, so students can learn in the most modern environments we can give them,” he said.

Bains talked about the money spent to upgrade the university’s internet connection, adding the need to analyze and store large data sets is at the core of Canada’s economy going forward.

“We are trying to promote the culture of innovation and nurture this culture of curiosity,” he said.

For his part, Sohi brought news of an investment of more than $39 million in discovery grants from the Natural Sciences and Engineering Research Council of Canada (NSERC) to support fundamental research at the U of A.

“The support we give researchers and students provides the solid foundation they need to explore new avenues of discovery that will benefit all of us,” said Sohi.

Governments celebrate completion of $82.8-million infrastructure projects for U of A; federal government announces $39 million in new research funding