Arnold is that guy who, when you play a game of shinny, everyone picks first. He always wants to make things better for the team and to help other people reach their potential. 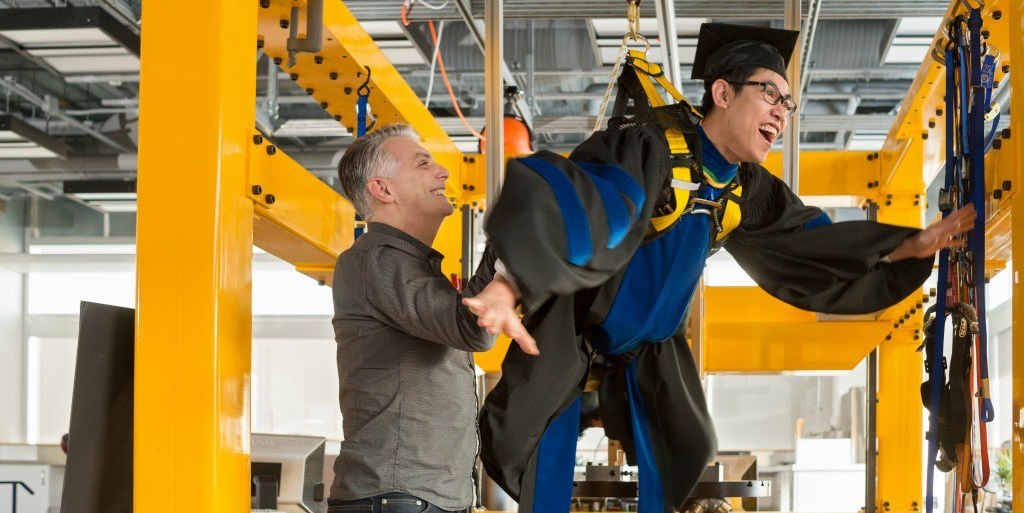 (Edmonton) When Arnold Wong arrived in Canada in 2009 to research low-back pain at the University of Alberta, he was a stranger in a great, vast mystery of a country.

Pittsburgh was the closest the Hong Kong-born-and-raised Wong had ever been to the 49th parallel. And while he enjoyed that visit—“It was the first time I saw snow,” he says—Edmonton was an unknown.

Fast-forward nearly six years, and Wong has found not only a second home in Alberta, but also a second family through Greg Kawchuk, his doctoral supervisor.

“By the time I finished my PhD, Greg said that he adopted me to be part of his family. And he’s part of my family now,” says Wong. “Greg is awesome—we are good friends.”

Wong’s academic journey to Canada wouldn't have happened without Kawchuk, a professor and expert in spine function in the Faculty of Rehabilitation Medicine. The two met overseas when Kawchuk was working on a project with Hong Kong University’s Yong Hu, Wong’s supervisor for his master’s in orthopedics and traumatology.

“The first impression of him was, he looks like George Clooney,” Wong laughs.

“I thought, wouldn’t it be great to work with a guy like this, because he’s a real scientist, he’s responsible and really takes care of students," Wong remembers.

“Arnold is that guy who, when you play a game of shinny, everyone picks first. He always wants to make things better for the team and to help other people reach their potential. He is a natural team captain,” he says.

Coming to the U of A meant leaving behind family in Hong Kong, yet thanks to his faith as a Christian and support from his fiance and parents, Wong never had any second thoughts, he says. It was the continuation of a journey of discovery that started during the seven years he practised as a physical therapist and first started showing an interest in clinical research.

“If you treat a patient and they recover, I enjoy that as a clinician. It’s satisfying to be able to incorporate my clinical experience into my research, to find the best treatment for the patient.”

When he arrived at the U of A, Wong says, Kawchuk told him to do one thing while considering his research projects: read. He did that, and submitted proposal after proposal—all of which Kawchuk turned down, pushing his student to reach further.

Kawchuk’s research into spinal manipulation treatment and how it affects stiffness and muscle contraction inspired Wong to take a closer look and understand what mechanisms were responsible for those changes.

With any treatment for low-back pain, Kawchuk explains, some people improve and some do not. Wong’s research sheds light on what makes these two groups different.

“We can now design ways to match these groups with the most effective treatments, as well as better understand the causes of back pain,” Kawchuk says.

The quality of Wong’s work has turned more than a few heads, earning scholarships such as the Graduate Scholar Award from the Golden Key International Honour Society and an Alberta Innovates – Health Solutions graduate studentship. Some of his former professors at Hong Kong Polytechnic University, his alma mater for two of his four post-secondary degrees, also took notice. Wong was hired in March as an assistant professor and now finds himself on a first-name basis with former instructors he used to call “professor.”

Wong plans to expand his research into low-back pain, looking at the relationship with osteoarthritis to see whether there are any biomarkers or biomechanical factors at play to explain why people develop either condition.

“They are the top two musculoskeletal disorders that cause disability, in the entire world, so this could potentially help a lot of people,” Wong explains.

Wong now has his own students to supervise. And just like Kawchuk inspired him to be a better scientist, he says his mentorship approach with students also sets a high standard.

“I feel like I have to treat my students with respect. I want to have a good relationship with them but at the same time help them learn how to plan ahead and do research. I won’t feed them, but I will teach them to cook—teach them to fish on their own.”

Even though he was the teacher, Kawchuk says he’s learned just as much from his student.

“Arnold continually reminds me that life is wonderful and every day is a new adventure that is much better to experience with a positive outlook,” he says.

Of the quintessentially Canadian lessons learned from his time at the U of A, Wong says being patient is perhaps the most important. It’s a change of pace from Hong Kong, where “everything has to be fast—boom, boom, boom!”

“Sometimes speed is not everything. You have to think, you have to slow down, you have to do more research before you come up with a really brilliant idea.”