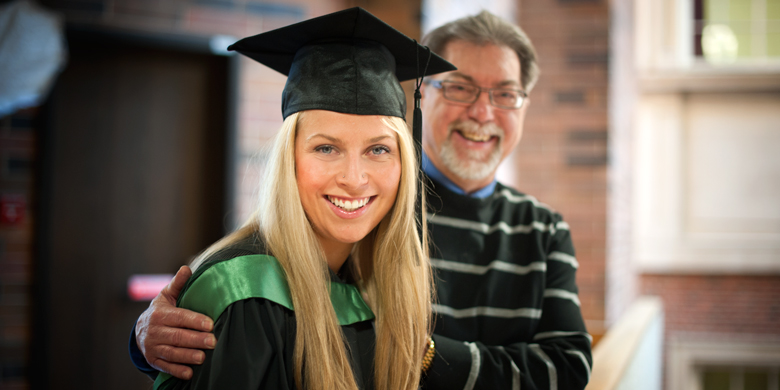 121120-fallconvo-sarahbarteaux-banner
Sarah Barteaux with her father, Vance, who inspired her to use her human ecology degree to help others in her chosen field of corrections. (Photo: Richard Siemens)

(Edmonton) On Sarah Barteaux’s finger rests a white gold band, representing her University of Alberta degree, her professional designation as a human ecologist, and the continuation of a proud family legacy.

The ring from the U of A Department of Human Ecology recognizes the depth of empathy that graduates have for their fellow humans. In Barteaux’s chosen field of corrections, that commitment is especially important.

“The gold represents the warmth of humanity and the caring that we as professionals engender. I am so proud to be a human ecologist, and proud of what the department symbolizes,” said Barteaux, who crosses the stage Nov. 20 to formally accept her bachelor of science degree.

Her degree also carries on a family tradition of helping others. Barteaux majored in family ecology and minored in community diversity, and is now putting those skills to the test working for the Edmonton John Howard Society, conducting assessments of the homes and communities to which federal inmates will be released. Eventually, Barteaux hopes to become a parole officer, following in the footsteps of her father Vance, who was on the job for 34 years as a guard at the Edmonton Institution and at Grierson Centre, a minimum-security facility in the city.

“My dad was one of the first guards hired at the Edmonton Institution. Something he always pushed was for me was to get an education, because he didn’t have any post-secondary, so while he had all the experience in the world, there was a barrier to him advancing in his profession because he lacked the formal education.”

After starting out first in arts and then education at the U of A, Barteaux, now 27, still wasn’t sure she was following her true path. “I remember going to my dad and saying, ‘I don’t know what to do.’ He laughed and said, ‘You should be a parole officer.’”

The idea appealed to her nature. “I’m not easily intimidated and I certainly have some strong values and morals when it comes to crime, and I have always been good at assessing people.” Barteaux had already taken a few human ecology courses through her earlier studies, and felt it would be a good fit to continue them.

“I found the courses to be so real. Human ecology is applicable to everything. We are taught skills that apply to dealing with human beings.” When the time came to do a practicum, Barteaux became the first human ecology student to work for Corrections Canada.

She feels she is now on her true career path.

“The goal of corrections is to manage risk and ensure public safety. I feel passionate about it, knowing that the work I am doing relates to keeping my community safe.”

Working with the families of paroled offenders, Barteaux relies on the listening and interviewing skills she learned through her human ecology studies to navigate a tough job. Family members of offenders often find it difficult to talk openly when she is assessing a home situation, she noted. “I’ve been told by these people that I am really easy to talk to. I take a lot of pride in knowing that people feel as comfortable as they can be.”

Barteaux is also “deeply proud” to be following in her dad’s path, and grateful for the opportunity provided by his hard work and dedication to a job that, like his daughter’s, was not easy.

Struck by the sombre environment during a visit to the Edmonton Institution one day, Barteaux afterward thanked her dad for working there day in and day out to support his family. “He could have chosen to go back to school to further his career and in turn, we could have gone without the privileges he provided for us. He made that sacrifice for our family.”

Barteaux was also buoyed during her studies by the “sense of community” that she felt in the Department of Human Ecology. “I always felt like the people there were invested in my learning and they were also concerned about me personally.

“The warmth of the department is like nothing that exists in any other faculty, I’m sure of it.”