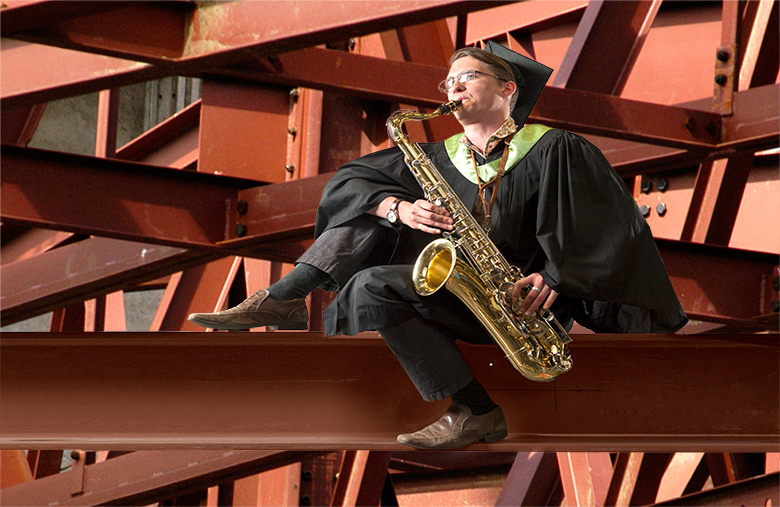 130606-tyler-heal-banner
Multi-talented engineering grad Tyler Heal is also a musician, a photographer and a web designer. On top of that, he started an annual engineering art exhibit and helped UAlberta forge new ties with the North. (Photo: Richard Siemens)

(Edmonton) “It’s a sexy time to be an engineer.”

That’s how newly minted engineering graduate Tyler Heal describes his feelings about the evolution of his chosen profession, which he says is embracing interdisciplinary work and broadening its scope to apply engineering solutions in areas as diverse as structural engineering or public policy.

“There are so many broad things you can do, and so many doors and opportunities that open up,” he said. “You have a chance to work with people with diverse backgrounds across campus and across different communities, and do a lot of really cool things.

Heal has always had a big-picture view of engineering and of student life in general. In his first year of studies, he volunteered as a photographer with The Gateway, volunteered at Edmonton’s jazz music club The Yardbird Suite, played saxophone with the U of A Concert Band and volunteered to do website design with the university’s chapter of Engineers Without Borders.

In his third year, he came up with the idea of staging a full-fledged exhibit of artwork created by engineering students, faculty members and professionals. Called Spaces, the exhibit ran for two weeks during National Engineering and Geosciences Month; this year, he and a core group of volunteers curated the second annual exhibit.

He also played a key role in helping to establish Engage North, a University of Alberta initiative launched this year to connect young people from Canadian universities to remote communities.

A native of Yellowknife, N.W.T., Heal says Engage North came at a time when he was feeling “the North pulling at me,” and as he took part in a University of Manitoba Bush School program in the community of Pangnirtung, Nunavut. Thanks in part to Heal’s front-line work there, three U of A engineering students are working on engineering projects in the hamlet this summer.

It’s in his nature to share the credit, and to be sure, Heal has received support from fellow students, professors and staff within the engineering faculty. That willingness to support new ideas, he says, is part of the changing face of engineering.

“The support you get from people here is great,” he said, calling the faculty and student groups “a great incubator” for new and innovative ideas.

After graduating, Heal is taking on employment in the Department of Civil and Environmental Engineering. After taking the summer off, he will start working with structural engineering professor Robert Driver.

“He has the highest graduate student load in the department and is doing some really interesting steel research,” said Heal. “I’ll get to learn more about doing research and dive deeper into structural engineering. You get a taste of it as an undergraduate, so I know what I don’t know—and I’m interested in learning more.”