Grad soars to new heights with 'eyes of a falcon' 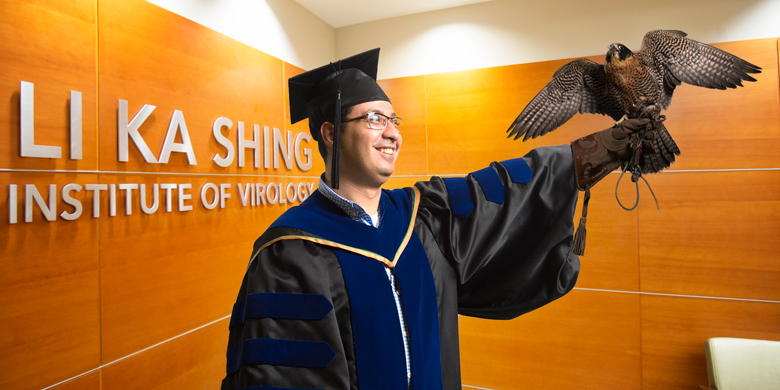 131120-convo-anwar-anwar-mohamed-banner
A falcon's eye for discovery: Anwar Anwar-Mohamed is making an impact in the search for a hepatitis C vaccine thanks to his ability to spot toxicity problems with antiviral drugs.

(Edmonton) Anwar Anwar-Mohamed has an affinity for falcons. They're majestic, faster than any other animal on Earth and have telephoto-like eyesight that can spot prey several kilometres away.

Anwar-Mohamed learned to appreciate the desert hunting skills of falcons as a boy growing up in Dubai, where falconry is a popular and ancient sport dating back to 2000 B.C. The bird of prey’s ability to see the horizon and plot several moves ahead is a trait Anwar-Mohamed shares through his efforts to make hepatitis C drugs less toxic—work he’s doing in the lab of one of the world’s leading virologists, and just a few months removed from completing his PhD.

“I’m the falcon of toxicology, as it were,” laughs Anwar-Mohamed, 30, a graduate of the Faculty of Pharmacy and Pharmaceutical Sciences at the University of Alberta.

His talent for drug toxicology and ability to pinpoint problem mechanisms led to one of the most productive research careers of any U of A pharmacy student. Under the supervision of Ayman El-Kadi, he published 33 scientific papers—five times the output of most grad students in the faculty. He was also the first pharmacy student to receive an Alberta Ingenuity Graduate Student Scholarship from Alberta Innovates Technology Futures.

From graduate studies to world-leading lab

Anwar-Mohamed’s skills grabbed the attention of Michael Houghton, one of the world’s leading virologists, who discovered the hepatitis C virus and developed the first vaccine candidate for clinical trials. Houghton, Canada Excellence Research Chair in Virology and director of the Li Ka Shing Applied Virology Institute at the U of A, hired him as a post-doctoral fellow—the first in a move to build stronger ties with pharmacy and take advantage of interdisciplinary skills needed to create antiviral vaccines and drugs.

“Anwar really is a perfect addition to our groups and our institutes. He’s only been in the lab six months or so but he’s already had a profound impact on several aspects of our research,” says Houghton.

“A lot of drugs have fallen by the wayside,” he explains. “No matter which virus or disease you’re making drugs for, it’s extremely hard to predict if a drug is going to be toxic or not in humans.”

Anwar-Mohamed has been tasked with finding ways to improve our ability to predict drug toxicity. Much of the work is confidential due to pending patent applications, but one aspect involves looking at how hepatitis C infection affects the metabolization of drugs at the cellular level. He’s found that if you infect liver cells with hepatitis C, it has a dramatic impact on drug-metabolizing enzymes—a significant finding, because the rate at which drugs are metabolized is a key component to drug toxicity.

“The pharmacy-toxicology-virology interface is so important with what we’re doing at our applied institutes, it’s really the start of what we think will be a much stronger, broader, deeper collaboration with pharmacy,” Houghton says. “Anwar is the vanguard and he’s doing a fantastic job. I’m really impressed.”

Anwar-Mohamed explains the mechanisms involved in toxicity are just as variable as scientific opinion. For his PhD dissertation, he investigated the toxicity of arsenic, a notoriously poisonous chemical that’s nonetheless used to fight certain cancers.

It’s the scientific curiosity and “answering questions that have never been answered before” that he finds so satisfying, he says.

“That’s also been the driving force in Michael Houghton’s lab. That curiosity has driven me to achieve multiple things in a very short time,” he says. “It’s a very vibrant environment here.”

Much of what Anwar-Mohamed learned about toxicity during his PhD can be applied to hepatitis C. He recalls receiving an email from Houghton outlining a problem with drug toxicity. Just a few lines into the email, which described the drug’s chemical structure, he was able to identify the problem mechanism.

“It might be a spark of genius or a touch of God or sharp vision, but I was able to get it from the outset without having to go through a range of experimental studying. It was just there,” he recalls. “It reminded me of a falcon and its vision to see its prey 1,000 metres away.”

Whether it’s instinct, innate talent or both, the Egyptian-born Anwar-Mohamed aims to parlay his vision into an academic position, preferably at the U of A, where he hopes to create his own research program dedicated to toxicity and drug development.

“The team at the faculty of pharmacy is really excellent, with lots of interaction between professors in different disciplines that makes collaboration easy,” he says. “I’m very grateful to the faculty of pharmacy, and especially to Ayman, whose expertise in the field of toxicology has helped me greatly in achieving my goals.”

Grad soars to new heights with 'eyes of a falcon'
Newsroom