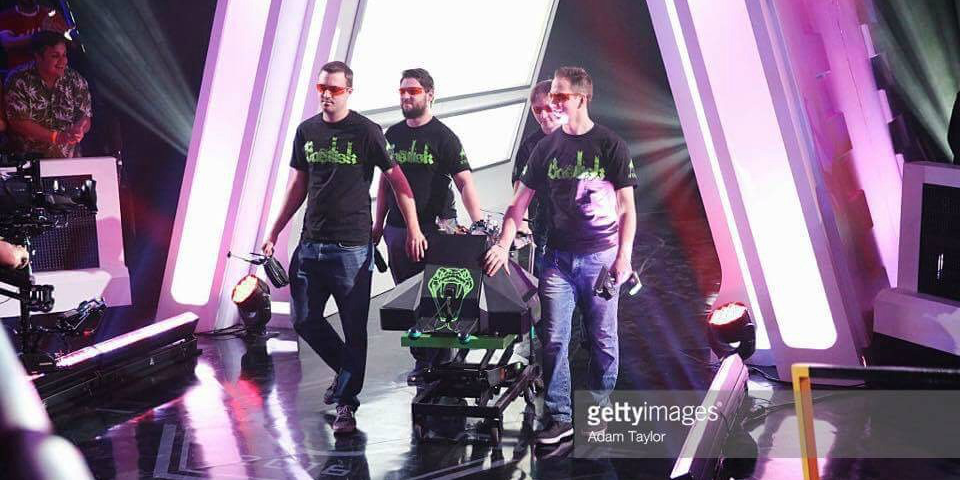 The pilot episode aired May 11 was a complete twist: producers lined up three-way robot battles among 12 teams vying for the final four spots on the season’s roster.

The MBS Robotics team, led by Sloan’s brother Lucas, was ready to rumble with a mind-blowingly cool robotic tag team. If it weren’t awesome enough that their robot, Basilisc, specializes in flipping and punching its opponents, the fact that it has a weaponized drone sidekick named Afterbyte that’s capable of landing on opponents, engaging a vacuum system to stick to them, and then piercing their shells with a drill press—well, that’s the cherry on top, right?

If you haven’t seen BattleBots, it isn’t for the faint of heart. Robots or groups of remote-controlled robots with a combined weight of 250 lbs. use saw blades, flames, flippers and crushers of all kinds to disable or destroy one another. The fighting takes place inside a Plexiglas cage, protecting competitors and audiences from metal chunks sent flying from the bots' explosive battles.

The local team was in the ring against a robot called the Blacksmith, armed with a flame-throwing hammer wielding about 3,000 lbs. of force, and Gemini—a set of twin robots each weighing 125 lbs.

The short version of the story? They came, they saw, they got beat up—and they’re no longer in the competition.

The Blacksmith bot came out swinging, its repeated blows inflicting blunt trauma injuries on the Gemini bots. Mair manoeuvred Afterbyte, attempting to land on one of the Geminis. The drone collided with Blacksmith and lay on the ground in ruins. Basilisc survived blows from Blacksmith but suffered a terminal mechanical failure in one of many high-speed ramming hits.

Somewhere in the chaotic battle, Basilisc also lost its “puncher”—a metal point that punctures opponents' armour with more than 1,000 lbs. of force.

“It’s inside one of the other robots. We’re not sure where it is,” Mair said after the televised broadcast.

“I saw every single episode,” said Mair. “I knew every one of the robots. It made me go out and buy a remote-control car. It had a huge influence on me.”

The program “made robots cool,” adds David. “Robots are inherently cool, but you’d watch the show and see people putting together relatively simple things—it made me realize this is something that is not outside the realm of possibility.”

While Mair was messing around with remote-controlled cars, Sloan was organizing sumo bot competitions at his high school in Peace River, Alta.

David and Mair joined Lucas and fellow teammate Graham Jordan for 12 days in Los Angeles for the taping of the entire season. Even after they lost the qualifying round, the team stuck around to watch the action. Backstage access helped them form strong friendships with other teams.

“It’s like a giant geek convention,” said Mair. “The robotics community is almost too nice.”

“The camaraderie was stronger than in any competition I’ve ever been to,” added David. “They’re amazing people and they’re all willing to help you.”

That said, the team said they impressed themselves at the competition—and they're contemplating entering again next year.

“We were surprised that when we got there, out of the newer teams we were one of the best-prepared groups. We were battle ready,” said Lucas.

As well as designing and building their own robots, the team had to come up with sponsors: Princess Auto, Special Metal Fabricating, and Formlabs, a 3-D printer manufacturer, played key roles in the team’s development. Another supporter, Peace Farms.green, will be using some of the technology the team developed, pneumatic valves they call “twitch valves,” to support agricultural irrigation in Kenya.