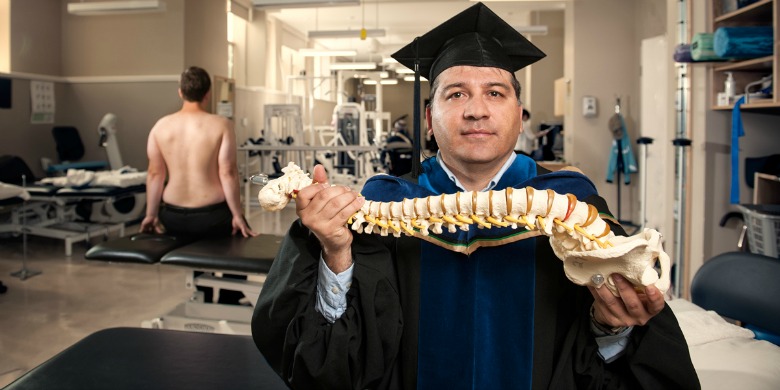 130604-jorge-fuentes-banner
With a master’s and PhD in rehabilitation sciences from UAlberta under his belt, Jorge Fuentes will help train a new generation of physiotherapists in his native Chile—using his own research on how patient interactions can reduce lower back pain. (Photo: Richard Siemens)

(Edmonton) Jorge Fuentes arrived at the University of Alberta eight years ago looking to enhance his clinical research skills in physical therapy for the benefit of his native Chile.

With a master’s and PhD in rehabilitation sciences from the U of A under his belt, Fuentes will help train a new generation of physical therapists in his country—using his own research that calls for a more patient-centred approach to treatment.

“There is a lack of people with clinical research skills in physiotherapy. That is a huge necessity for us as a profession in Chile,” said Fuentes, who officially receives his PhD at a convocation ceremony June 5. “We need to be able to create quality clinical research, and that is going to be my focus.”

Before arriving in Edmonton in 2005, Fuentes was a practising physical therapist and assistant professor at the Catholic University of Maule, in central Chile. After researching graduate programs throughout the world, he started an email dialogue with the U of A’s David Magee, with whom Fuentes was familiar from Magee’s renowned textbook, Orthopedic Physical Assessment, and eventually paid a visit to see for himself.

It didn’t take him long to realize that the U of A's Faculty of Rehabilitation Medicine was the right choice.

“It was the people. They were very welcoming for us,” says Fuentes. “It was a quality program, of course, but we were looking for that extra plus and that was it—the people, the environment, the faculty, the members of this faculty.”

When he first arrived, Fuentes was isolated from family and friends in Chile, including his wife Andrea and son Max, then six years old. But his family eventually joined him in Canada, and after a while they made a home in Edmonton, seeing their household expand with the birth of daughters Agustina and Dominga.

Fuentes’ research interest is pain, which he notes is at the heart of almost every patient’s concerns when seeking treatment from a physical therapist. For his PhD dissertation, he examined how patient interactions can affect a patient’s chronic low back pain.

Fuentes found that how physical therapists interact with patients—open communication, active listening, eye contact, facial expressions, tone of voice—plays a significant role in pain reduction. It’s the first time that such non-specific factors of physical therapy treatment have been studied in a randomized controlled study.

In the study, 117 patients with chronic low back pain were split into four groups. The first received electrotherapy after limited, five-minute interaction with the physical therapist, who avoided eye contact and did not openly engage the patient. The second group received the same electrotherapy with enhanced interaction in which the physical therapist spent the entire 30-minute treatment with the patient and exhibited strong verbal and non-verbal communication.

The third group received the limited interaction while hooked up to electrotherapy, but the patient was unaware the device was not connected—what Fuentes calls “sham” treatment. Patients in group four received enhanced interaction with the same sham treatment.

Fuentes found that patients with enhanced interaction and real electrotherapy reported a three-point reduction in pain intensity on a 10-point scale, along with a two-kilogram increase in their pain thresholds—results he said that are considered clinically significant.

Fuentes says his findings, which he recently presented to strong feedback at the International Society for the Study of the Lumbar Spine Conference, are just the first step in understanding the importance of non-specific factors and optimizing treatment for patients.

“The way we are applying treatment today is not the best approach,” he says. “That might be the reason physical therapy interventions have such a modest effect for patients with chronic conditions. The therapeutic context, in which the interventions are delivered, matters. We have to take these non-specific factors into consideration.”