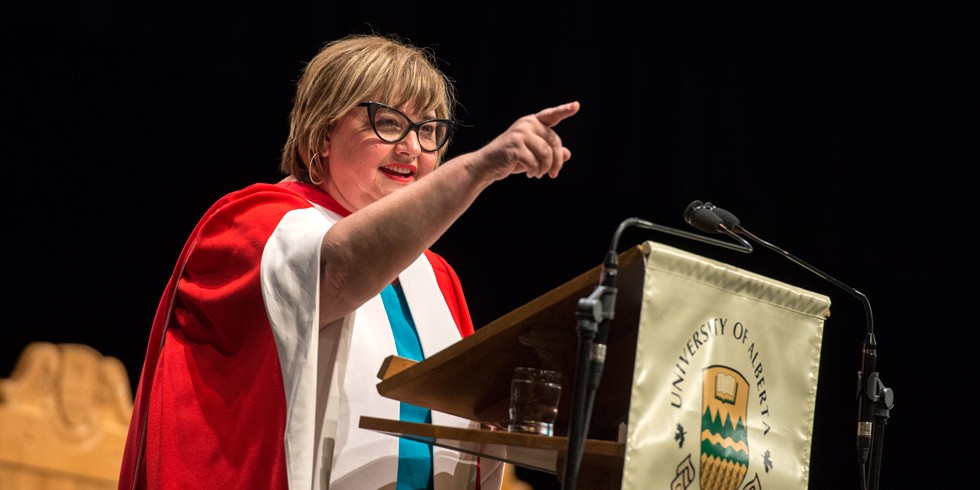 Sandra Woitas makes a point during her convocation address to graduands of the Faculty of Education June 11. (Photo: Richard Siemens)

(Edmonton) Sandra Woitas isn’t famous, a revolutionary thinker or a corporate maverick. She is, at heart, a simple Ukrainian farm girl from Calmar in sensible shoes.

Packing common sense and a strong work ethic inherited from her parents, Woitas has an attitude all her own. And attitude, she says, is what counts.

“Attitude is everything. A common girl like me can teach you knowledge and skills. I can’t teach you attitude,” Woitas said June 11, when she received an honorary doctor of laws degree from the University of Alberta.

A lifelong educator and advocate for disadvantaged children, the U of A alumna has an abundance of attitude thanks to a rebellious streak seasoned during her “misspent youth”—what she calls the four-year gap between high school and higher education. She didn’t exactly see eye to eye with authority figures.

“About that trouble with authority thing: there was a part of me that didn’t want to wear pants under my robe,” Woitas told graduands from the Faculty of Education.

Woitas found her passion at the U of A after enrolling in special education. It was the start of a remarkable career as a teacher and school principal in the inner city, where she became an advocate for children from low-income and unstable families. She created Partners for Kids, a program that helps children who often come to school sleep-deprived, malnourished or in need of other social support or mental health services.

Woitas also served as director of the City Centre Education Project with Edmonton Public Schools and led a provincial family violence and anti-bullying initiative—work for which she was recognized through accolades such as the Alberta Teachers’ Association Early Childhood Education Advocate of Young Children Award, U of A Distinguished Alumni Award, Edmontonian of the Century, and now an honorary doctor of laws degree.

Given her grades in high school, it’s a journey that probably has her father rolling in his grave and would have shocked a few of her teachers, she said.

“So standing in front of you, I want you to look at me as your reminder that your past is not your future.”

Soon, the class of 2014 will join thousands of others in the province with degrees in education, among thousands of current and future teachers. “Amongst all this, you are the only person who has the sole custody of your life,” she said. “You have so many gifts to share.”

She encouraged grads to “take all kinds of risks, fail, get up again and make your own luck.” But don’t expect fame or headlines. Being a hero? That’s another story.

Life is a series of choices, and Woitas encouraged the class of 2014 to make choices that lead to joy. One of the best pieces of advice came from a very close friend, the late Pat Hogobaum, who once called daytimers the windows of life. It’s important to be able to see out the windows and make time for what really matters.

“She warned me about letting too many people steam up my windows,” she said. “When the windows get all steamed up, I can’t see through to what really matters—family, friends, finding joy, having a great laugh.”

The joy you find in life will create joy in the classroom, she added.