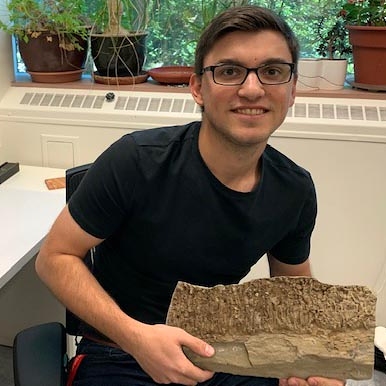 Graduate student Scott Melnyk holds the trace fossil he discovered in the U of A's drill core collection during a sedimentology course. (Photo: Supplied)

Discovery is one of only a handful of wood-boring trace fossils from marine environments found to date. 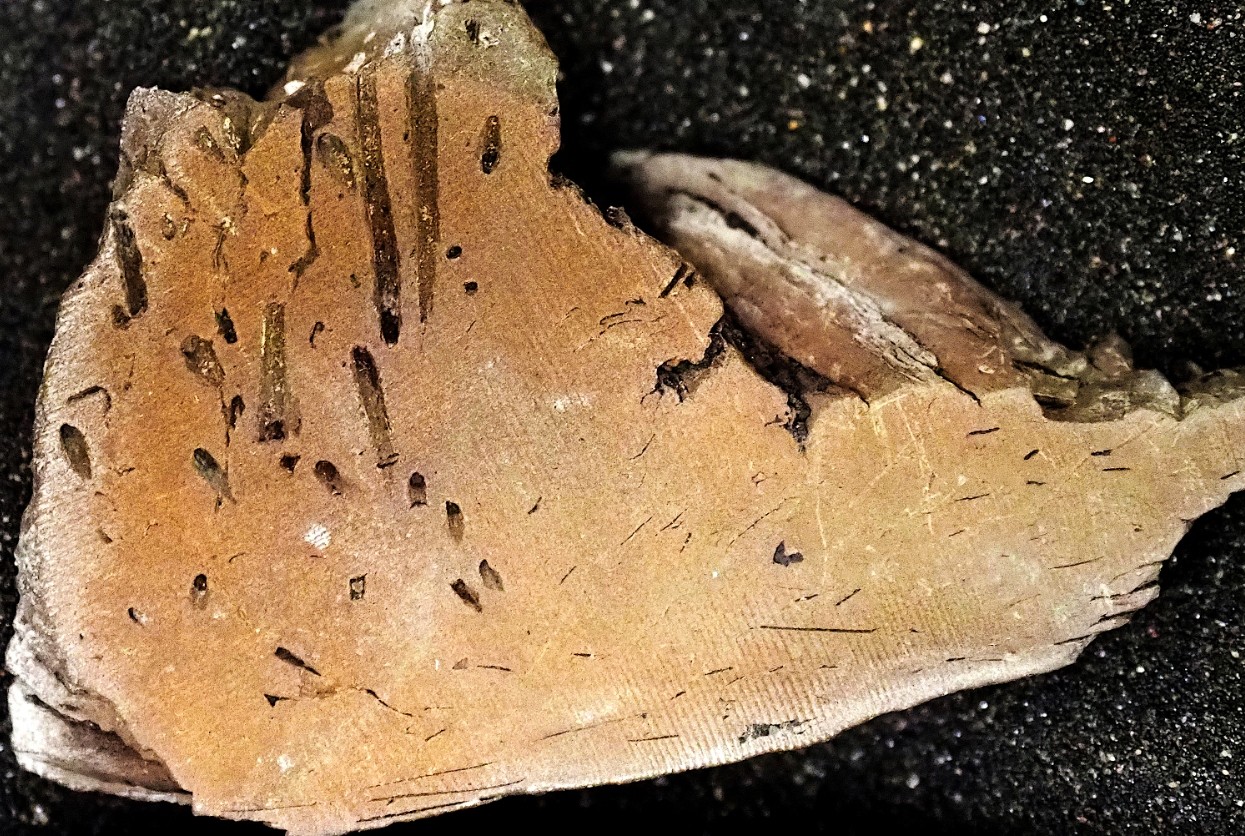 A sample of the fossil revealing traces left behind by a newly discovered wood-boring organism that lived about 100 million years ago. (Photo: Scott Melnyk)

A University of Alberta graduate student who made an intriguing fossil find during a course ended up identifying the fossilized tracks of a newly discovered wood-boring organism in a new study.

“Apectoichnus lignummasticans is unique in that it is only the third wood-boring trace fossil associated with marine environments,” explained Scott Melnyk, graduate student with the Faculty of Science and member of the Ichnology Research Group.

Trace fossils—which include tracks, burrows and tunnels—are the fossilized evidence of the activities of past life, explained Melnyk, who conducted the research under the supervision of professor Murray Gingras.

“Trace fossils are very useful to interpret environmental characteristics of Earth millions of years ago,” said Melnyk. “The marine origin of these fossils, for example, provides evidence that the shallow sea that covered much of Western Canada—the Cretaceous Interior Seaway—extended into west-central Saskatchewan roughly 100 million years ago.”

Discovery from the classroom

Melnyk came across the fossil during a graduate-level sedimentology course in a core sample from the U of A’s Drill Core Collection. The collection was donated by Shell Canada and contains more than 6,000 metres of drill cores that the Department of Earth and Atmospheric Sciences uses for teaching and research.

“The following year I became a teaching assistant for the course, and brought the fossil to the attention of my adviser, Murray Gingras,” said Melnyk. “From there we set out to study whether or not the trace fossils were in fact unique and determine their geological significance.”

“This is only the second time in 20 years that a University of Alberta graduate student has named a new trace fossil,” Gingras noted. “The fossils are similar in many respects to modern borings in wood by marine isopods—this was a remarkable find and a testament to the importance of our students’ work.”

The study, “A New Marine Woodground Ichnotaxon From the Lower Cretaceous Mannville Group, Saskatchewan, Canada“, was published in the Journal of Paleontology.