Granddaughter of the pioneer 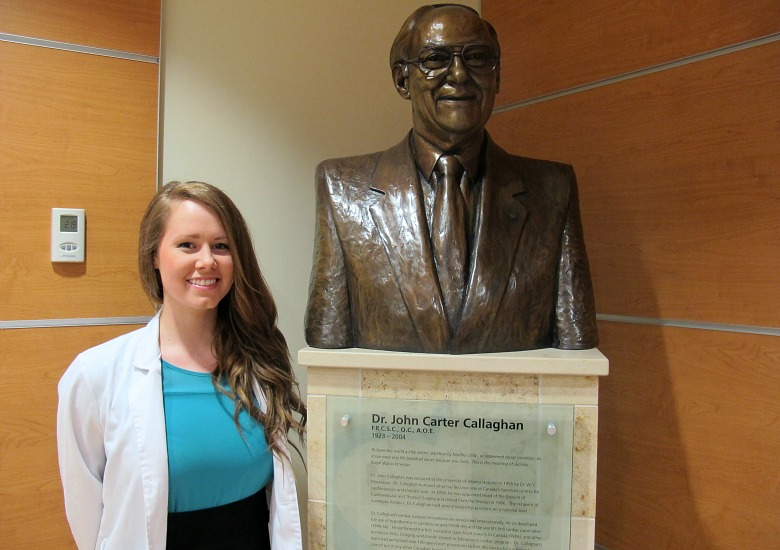 (Edmonton) The late John Carter Callaghan is world-renowned for his cardiac firsts. He conducted the first open-heart surgery in Canada, he was the first surgeon in the country to repair a “blue baby” malformation, and he co-created the cardiac pacemaker. He retired from the University of Alberta’s Faculty of Medicine & Dentistry in the mid-1980s. Now, in the medical school’s centennial year, his granddaughter will graduate as a physician—the only relative in his family to follow in his footsteps as a doctor.

Natasha Hajduk, 25, is accepting her medical degree June 7, shortly before moving to Calgary, where she will start her residency in family medicine. She says her grandfather’s legacy inspired her to become a doctor.

“My parents always told me about his accomplishments. And in Grade 6, I did a project on him for school. I have always been very proud of him and his legacy. That was always instilled in me. And he is part of the reason I went into medicine.

“I also really enjoy the science of medicine. In Grade 12, I really enjoyed learning about hormones and the body and how everything worked together. I was curious to find out more about the human body and also had a strong desire to help people. Being a doctor is a nice way of tying all of that together.”

During her clerkship, Hajduk did a rotation on the cardiac surgery ward at the Mazankowski Alberta Heart Institute. On the ward was a statue of her grandfather, along with many plaques commemorating his achievements.

“And when I spoke to cardiac surgeons, they would immediately tell a story about how he inspired them, or how compassionate he was and how he cared about his patients—that was a great experience, to hear all those stories.”

Callaghan came to the U of A in 1955 as a lecturer in surgery and performed the two historic surgical procedures in 1956. A few years later, he accepted additional roles in the faculty in the Department of Surgery as assistant clinical professor and head of the division of cardiovascular and thoracic surgery. He stayed in these positions until his retirement.

Looking forward, Hajduk says she is excited about her family medicine residency because she likes the idea of having long-term physician-patient relationships.

She says she is also excited about graduating during the medical school’s centennial year, because it is such a significant milestone, and one that her grandfather would have been proud of.

“I think he would have been have been really proud of this achievement, and proud that there is another physician in the Callaghan family.”

Granddaughter of the pioneer
Newsroom