U of A student creates story of 16-year-old transplant recipient who has to save Edmonton from mutant earthworms. 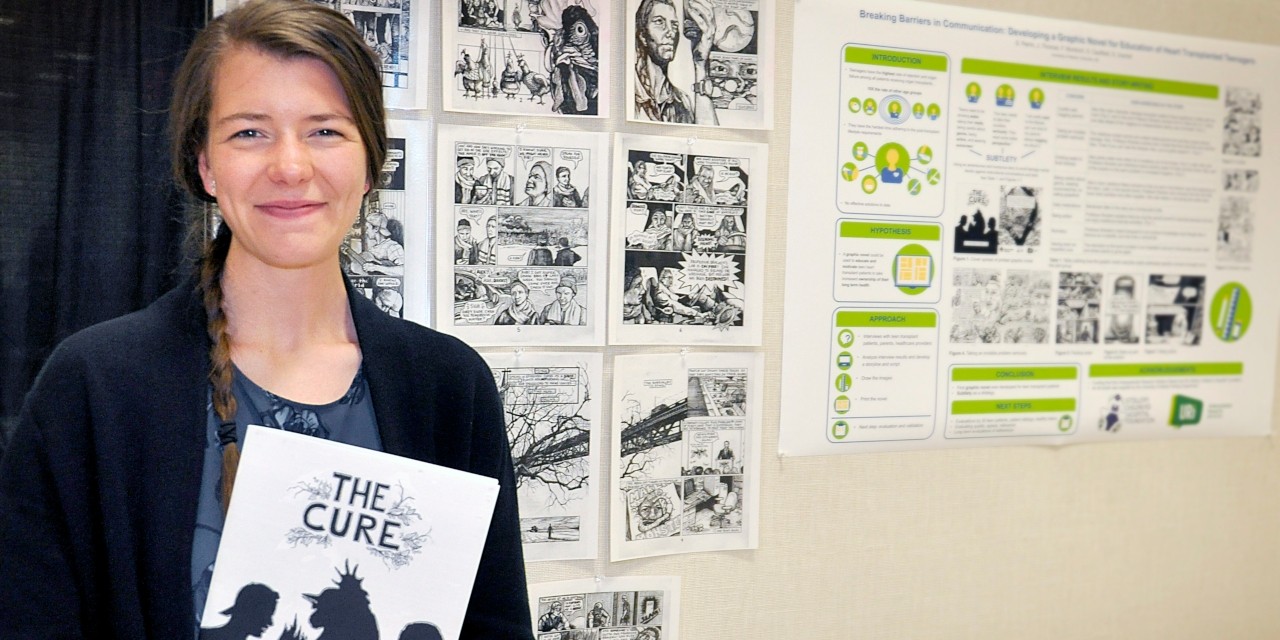 Stephanie Perrin with her presentation on "The Cure," the graphic novel she created to help teen transplant recipients take care of themselves and cope with life after their surgery. (Photo: Michael Brown)

A University of Alberta art and design student who is going to medical school next year figures Edmonton won’t look much different in 10 years than it does now except for one thing—the Alberta capital will be under siege from an unseen threat: mutant earthworms that don’t die.

Holding this unlikely menace at bay is the plotline for The Cure, the first graphic novel by Faculty of Arts graduate Stephanie Perrin, who created the 44-page thriller as a way to help teens living with a heart transplant navigate life.

“Teenagers have the highest rate of rejection and organ failure among all patients receiving organ transplants,” said Perrin. “They also have the hardest time adhering to the post-transplant lifestyle requirements.

“A graphic novel could be used to educate and motivate teen heart transplant patients to take increased ownership of their long-term health.”

She said the idea for the book was spawned early in 2018 when Perrin contacted a neighbour, pediatric cardiologist Simon Urschel, to ask if he knew of any opportunities that combine art and design with something in the medical field.

“He had seen some of the paintings I did for my arts degree and just happened to be thinking of something to help teens deal with heart transplants, so it was actually his idea to write up a graphic novel.”

The pair applied for funding from a handful of agencies, and won a grant from the U of A’s Undergraduate Research Initiative, which was created in 2011 to engage undergrad students in research and creative activities.

Perrin spent the summer interviewing teenage heart transplant patients, their parents and health-care providers to determine the key messages that needed to be included and come up with a compelling storyline to roll out those messages in a subtle yet clear way.

“I didn’t want to do a ‘Captain Antibody fighting against the bad guy.’ I wanted to write a story that has action and is humorous, and incorporates the messages that health-care providers said the teens weren’t doing very well, like being active and avoiding germs.”

While the medical professionals talked about forging better habits, teens themselves had their own set of frustrations.

“It wasn’t the acne, the hair loss or the weight gain from the medication, which is what I thought. For them it was actually conflict with nagging parents,” said Perrin.

With all that information, Perrin, who has a minor in creative writing, set her story in a dystopian future where lab-altered earthworms are threatening all plant life in the Edmonton area by consuming all the nutrients from the soil.

The protagonist is a 16-year-old teen named Alex, who in normal in every way except he’s been living with a heart transplant since he was six.

“I think he should be decently relatable for a lot of reasons, but also because he has a lot of conflict with his mother,” said Perrin.

Alex ends up leaving home to search for the missing scientist who went into hiding after her lab was burned to the ground and her experimental worms escaped.

“But when he is packing his runaway bag, he also packs his transplant medication and water. I wanted to suggest even though he is rebelling, he is still taking care of himself—that the guidelines for living with a heart transplant is not the thing he chooses to rebel against.”

As for painting the normally helpful, unassuming earthworms as adversaries, Perrin noted it was how they go about their business, unobservable, that made them the perfect menace.

She has also presented the book at a number of research days across the U of A’s Faculty of Medicine & Dentistry, and said she has been amazed by the support.

“I recently presented to a group of nurse practitioners at the Stollery, and they liked the way it had addressed things that they had seen, that their patients were struggling with. That was a neat validation for me.

“It has been fun to see people in different departments saying they want something like that in their department.”