Green and Gold shines in Edmonton's Top 40 Under 40 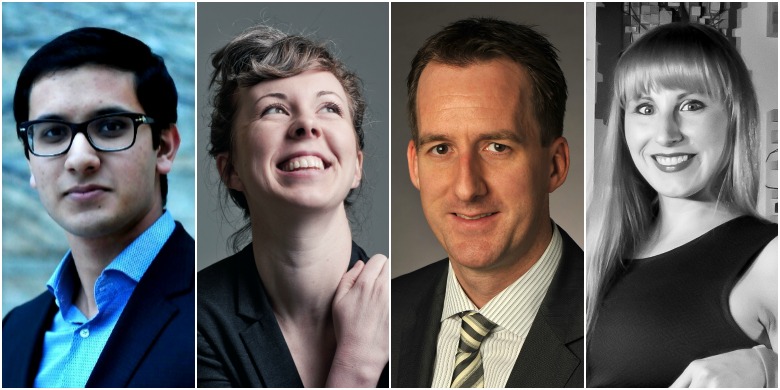 131121-top40-banner
(From left) Sameer Dhar, Alexis Hillyard, Michael Stickland and Alexis Marie Chute are among the 23 UAlberta students, staff and faculty members recognized as Edmonton's Top 40 Under 40 for 2013.

(Edmonton) A day removed from being named one of Edmonton’s top young community leaders, University of Alberta business student Sameer Dhar was on the road in rural Alberta encouraging high school kids barely his junior to build stronger communities.

At just 20 years old, Dhar already knows passion and commitment can make a meaningful difference to a community. It’s a lesson he learned in Grade 12 at Harry Ainlay High School when he and teacher George Heidt founded Geomeer, a charity that encourages students to raise donations for families in need—friends and neighbours right in their own communities.

“Within two weeks we’d raised over $16,000 worth of goods for eight families in need—literally a truckload,” Dhar says of that first campaign, which topped out at $100,000 and eclipsed the school’s previous holiday fundraisers.

The following two years, Geomeer raised another $360,000, and Dhar continues to take his message to high-school students in other parts of the province, all while juggling his studies at the U of A. His efforts led to his appearance on Avenue magazine’s Top 40 Under 40—a list that includes 23 U of A students, faculty, staff and alumni.

Not-for-profit work has become Dhar’s passion, and the skills he’s learning in the business faculty are paving the way to a bright path. Choosing the U of A also allowed him to stay connected to Geomeer and puts him where he wants to be in the future, be it the private sector or not-for-profit.

“Alberta in general is the best place to be in the world right now. The opportunity for growth and the culture that we have right here in Edmonton is unparalleled.”

Pride at the U of A

Alexis Hillyard’s business card might read “education co-ordinator,” but that doesn’t do justice to all she does for the Institute for Sexual Minority Studies and Services (iSMSS) and the U of A.

Sure, much of her job is focused on educational outreach and working with students, faculty and staff on and off campus on LGBTQ issues. But her role is always changing, from creating inclusive spaces on campus to spearheading the U of A’s first-ever Pride Week and organizing Camp fYrefly and fYrefly in Schools, a peer-to-peer mentorship program that trains youth volunteers to share stories in classrooms and address issues such as homophobic language and terminology, and transphobia.

Who cares about job titles when the work changes lives?

“Seeing the light bulbs go on when I’m able to facilitate a discussion or workshop, watching people engage with each other, chatting about strategies, ideas and issues, and watching them come up with all these solutions on their own is really great,” says Hillyard, 31, another top Edmontonian.

“That’s when it’s like, whoa, this is the right place to be.”

Finding her place was a natural evolution of sorts for the U of A alumna, who landed a research assistantship at iSMSS after completing a master’s degree in social justice and global education. Since coming on full-time, she has assumed a role that constantly evolves with an eye to raising visibility and awareness of LGBTQ issues.

The U of A took a large step forward in that regard last spring when the institution held Pride Week, featuring some 30 events over 10 days. For many, its mere existence was a powerful symbol.

Hillyard recalls being approached by a staff member who, upon seeing the Pride Week banner, told her it how powerful it felt to be recognized and validated by the institution.

“It really meant something to them—something as simple as flag banners,” she says. “For someone to be made to feel so comfortable by their workplace was so simple and powerful.”

Imagine going through life breathing through a straw, unable to catch a breath, lacking the physical capacity for all but the most basic exercises.

That’s how many people describe living with chronic obstructive pulmonary disease (COPD)—a debilitating condition that’s the fourth leading cause of death among Canadians. There is no cure, but researchers are making headway in developing treatments that help patients live and breathe more comfortably.

“The Canadian Physical Activity Guidelines say you should take 10,000 steps each day; our patients get about 2,500 steps per day, and some get less than that,” says Michael Stickland, an associate professor in the Faculty of Medicine & Dentistry and director of the Centre for Lung Health in Edmonton.

A member of the U of A’s Pulmonary Research Group, Stickland is working on ways to improve a COPD patient’s tolerance for exercise through rehabilitation and by improving our understanding of cardiovascular dysfunction. Patients in rehabilitation are more active, they’re out of breath less and, in turn, they have greater exercise tolerance and a healthier cardiovascular system.

“It leads back to the disease management side. If we can get these patients active and get them walking a couple times a week, that will really improve their cardiovascular condition and reduce their cardiovascular risk,” says Stickland, 39, another top Edmontonian whose deep roots in the city include two degrees from the U of A.

Stickland’s work at his alma mater is the kind of research that isn’t confined to a solitary laboratory but involves working with patients and helping them find their stride.

“It’s fun because I get to do the research and also see the effects it has on the patients,” he says. “A lot of the work that we’re doing is not only, for example, looking at how exercise and rehabilitation improves functional status and quality of life in patients, but it’s also helping to keep them out of hospitals.”

—With files from Amy Hewko

The birth of a child is transformational for any parent, but Oct. 14, 2010, was the start of Alexis Marie Chute’s rebirth. That’s when the artist-photographer-writer held her son Zachary for the first and last time as he succumbed to a heart tumour minutes into his short life.

After her son’s death, Chute spiralled into a deep depression, halting all artistic output—what she now calls her Year of Distraction. When she held a paintbrush again, her canvas became more than a creative outlet; it was an avenue to rebirth.

“It was in getting back to my artwork, and ultimately what I’m most passionate about, that I began to see that art has this capacity to express the parts of ourselves that are mysterious,” says Chute, a 29-year-old mother of two and U of A fine arts grad. “After a person dies, part of them lingers on with you, and yet you’re pulled forward by life.”

Her artistic rebirth not only released her from depression, but also enabled her to help other parents find healing through her blog, called Wanted. Chosen. Planned. Dedicated to grief and loss, the site has an international following, touching parents who know the tragedy of losing a child. It’s a subject to which she’s also lent her voice as a keynote speaker at Walk to Remember and Baby Steps Memorial Walk.

“The loss of a child is very isolating; we don’t talk about it very much, and I think that’s part of the problem,” she says, noting one in five pregnancies end in miscarriage. “We need to start talking about these things.”

Creatively, Chute is in full stride coming off an artist-in-residency at the Harcourt House and subsequent exhibition, The Quiet Rebuild, which runs until Nov. 29. She’s working on a master’s in creative writing and is penning a memoir about being pregnant with her third child after losing her second.

Her journey, though tragic and sorrowful, has been a gift.

“It’s one of the greatest gifts my son has given me. Even though his life was short, he’s helped me find myself in a new way.”

Here is a complete list of U of A alumni, students, faculty and staff named to the Top 40 Under 40:

Green and Gold shines in Edmonton's Top 40 Under 40
Newsroom