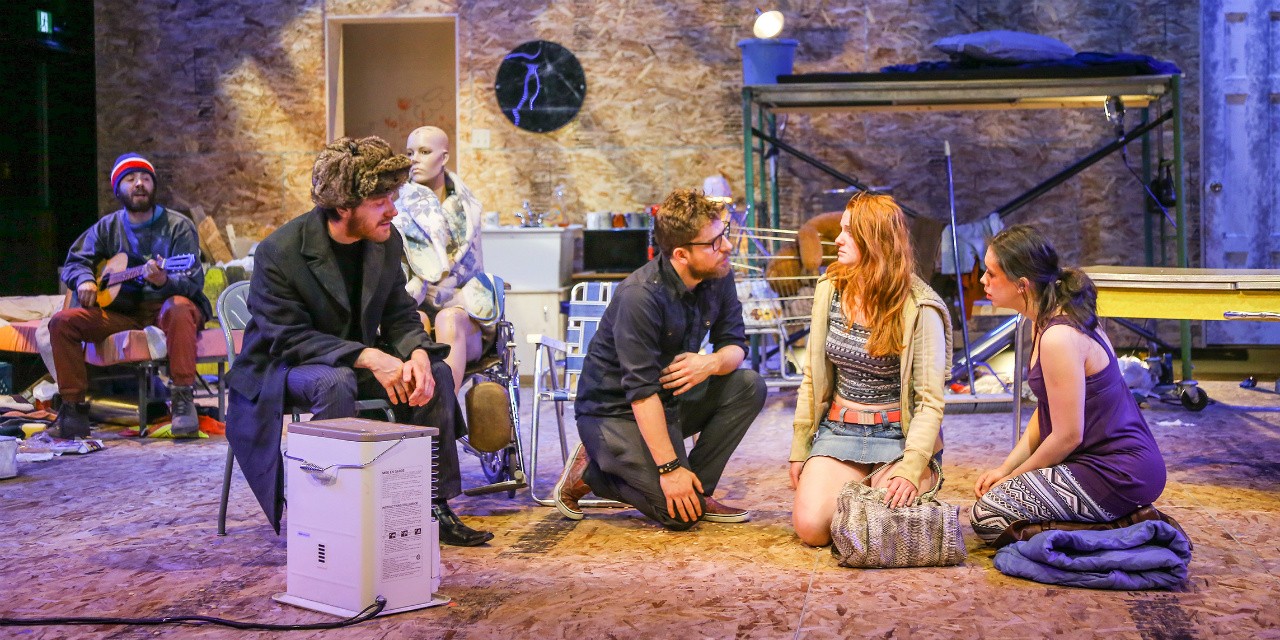 The new Studio Theatre production of "The Lower Depths" puts a modern twist on Maxim Gorky's original play but preserves its unsentimental look at humanity in the face of poverty, addiction and depression. (Photo: Ed Ellis Photography)

Squatting together in an abandoned retail building, characters from a neglected underclass struggle with poverty, unemployment and opioid addiction. They do their best to survive in a rapidly changing world defined by growing economic disparity.

This modern scenario could take place almost anywhere in urban North America, but the original The Lower Depths is actually more than 100 years old and set in Moscow. The play by Maxim Gorky, a five-time Nobel Prize nominee, depicts the lives of alcoholics, sex workers, thieves, and homeless men and women living together in a shelter.

Gorky's best-known play is a masterwork of Russian social realism, but the parallels to contemporary life are striking, said David Kennedy, director of this latest Studio Theatre production and a professor in the University of Alberta’s Department of Drama.

"Gorky is interested in poverty, addiction and depression—the things that still exist in epidemic proportions,” said Kennedy, adding that the events of the play were “pretty seamlessly updated.

“When I started to delve into the text, I realized that the guts of the play were totally fresh and relevant to contemporary audiences.”

The language of the play was another matter. Because The Lower Depths has generally fallen out of the professional repertory—mainly due to its unwieldy cast of 17 players—the most recent English translation Kennedy could find was 40 years old, and the dialogue was antiquated. So he found a public domain translation on the Internet from the 1920s and rolled up his sleeves.

"I ended up rewriting probably 65 per cent of it,” he said. “Probably 99 per cent of the plot remained, but I cut or combined characters to get down to 12,” who are all closer in age to the actors, who hail from the university’s fine arts program.

After Kennedy updated the dialogue, the cast further refined it in rehearsal to render delivery more natural. The result is appropriately gritty and profane, reflecting the social realism of our own age.

"My desire was to be faithful to the spirit of Gorky, while trying to also be free enough to think of this as if I was writing a new play," said Kennedy. “It’s about the underclass that exists in this world.

“The remarkable thing about Gorky's play is he's utterly unsentimental. He's not portraying them as saints or angels. There's a real complexity there.”

Kennedy added that Gorky’s deep and abiding sense of humanity, in all its depth and subtlety, attracts him as a human being and artist.

“Gorky sees that our illusions can keep us trapped, but they also keep us alive, keep us hoping. If we give up all illusions, what is there left for us to live for?

“I hope this production is presenting as full and complicated a picture of the human condition as we're able to muster."