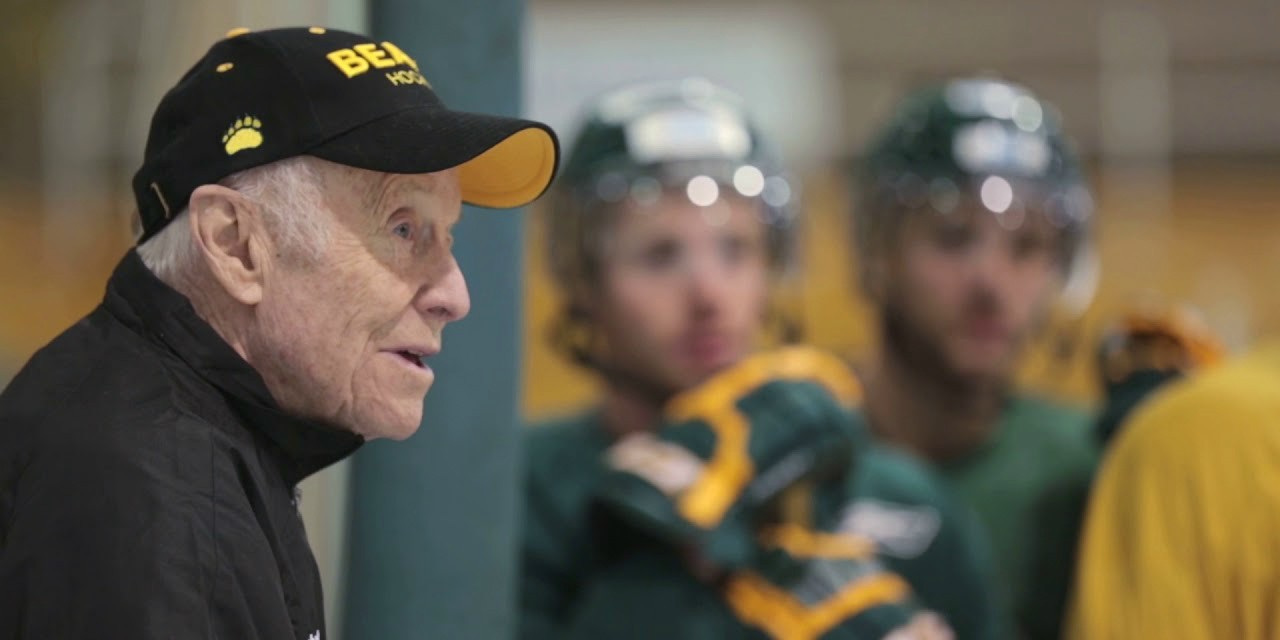 Clare Drake's passion and work ethic as a coach and mentor were grounded in a concern for people and a deep sense of loyalty, say the people who knew him well.

In Ian Herbers’ first year as head coach of the Golden Bears hockey team, he led the storied program to its 50th Canada West title and a berth in the 2013 national championship.

Having never been to a tournament of this magnitude before, a nervous Herbers reached out to a pair of his former head coaches, Clare Drake and Billy Moores, for a meeting. Joining them was another former Golden Bears head coach, and the team’s current GM, Stan Marple. The men exchanged pleasantries as they sat down in a booth at a Tim Hortons for what Herbers expected would be a fruitful although informal conversation with fellow coaches.

He was 84 then, and still, according to Herbers, ahead of the curve.

Herbers played for Drake for one season before the legend retired in 1989 as the winningest coach in Canadian university history and, more importantly, the godfather of Canadian hockey.

“Our practices were very detailed, very structured,” said Herbers. “There was a lot of teaching in a very healthy, competitive environment.

“I don’t remember him ever yelling and screaming at us.”

That wasn’t Drake’s nature. Herbers said he brought in good people who shared his passion for the game and empowered the veteran players to set a tone of hard work, respect and learning.

“Coach Drake handed over the reins to the older guys to show the first-year players what was expected—the work ethic, the details, the passion—and not just around the rink, but everywhere.

“He wanted to build better people, better students. You can see from the number of former Golden Bears who have gone on to be doctors and lawyers and owners of companies, teachers and coaches, and on and on and on.”

“The Golden Bear way,” as it has come to be known, is so ingrained into Western Canadian hockey, most minor hockey coaches and players don’t know that the playbook they’re using was developed by Drake.

Herbers didn’t, and he was coached by a proud Drake disciple, Ken Hitchcock, for two years in Sherwood Park two decades before Hitchcock became a Stanley Cup champion.

“I didn’t realize Coach Hitchcock was learning his trade from Coach Drake. Now, I assume a lot of what Coach Hitchcock did with our midget (AAA) team were the kind of things that he had discussed with and seen from Clare Drake.”

And while there are a lot of great Canadian coaches, Herbers said what separates Drake from the pack is how much he cares.

“You just know he cares, he cares about people.”

Herbers said he made a habit of checking in with Drake at least every two months during his first coaching stint with the Bears. On one visit, Marple, who was on hand, mentioned a player who had played for Coach Drake in the early ‘70s.

“Drake immediately said, ‘Centre, left shot, 5-10, average skater, great on faceoffs—better on his strong side than his weak side,’ and he went on and on about this player.

“The ways in which he remembers people showed me how much he cared.”

And if he knew you, then he was loyal to you.

No one understood this better than Drake’s fellow Order of Canada recipient and close personal friend, Bob Steadward.

Decades before he championed the Paralympics and founded the U of A‘s Canadian Research and Training Centre for Athletes with Disability, renamed The Steadward Centre for Personal and Physical Achievement in 2000, Steadward took one of Drake’s coaching classes on his way to joining Drake on faculty at the U of A in the late ‘60s.

“He was loyal to family, his friends, his coaches and players,” said Steadward. “I think of his family—they were so loyal to him, and they had to share him with so many people. They shared him with hockey teams and shared him with friends.”

Steadward, who was the U of A athletic director in the late ‘80s, said Drake had a magnetic personality.

“He had that unique blend of positive personality and yet came across as being very direct and technically sound. People were always attracted to Clare because he was a great listener.”

Drake’s inner circle of friends, informally called “the board,” would meet regularly right up until his death. Steadward said the group would talk about sports—particularly hockey—and life.

“We would try to solve the problems of the world. Drake would listen carefully and then he would challenge you or make a statement; you knew his mind was churning all the time,” said Steadward.

“But he had that real twinkle in his eye that made you curious about him, about what makes him tick and what makes him such a good person. I miss him.”

As for Herbers, who makes his return as head coach of the Golden Bears after a three-year stint with the Edmonton Oilers, he will go at it without the wisdom of Coach Drake just a phone call away.

“It’s kind of like your parents—you don’t realize how much they've done for you until you leave the house,” he said.